His Name is Prince and He is Funky! 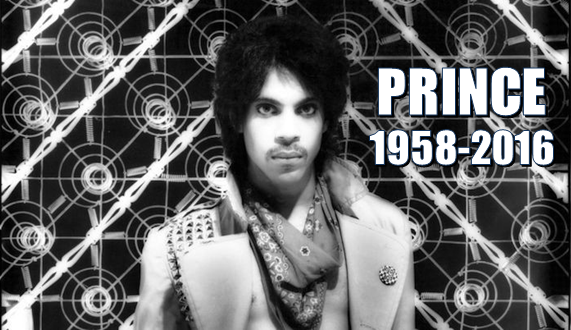 We at the Fire Note were absolutely devastated to learn of the passing of Prince at the age of 57. His impact is undeniable, his creativity, artistry and vision rank up there with the all-time greats. Not only was he for a time arguably the most popular artist in the world, he was also the best. He was the rare pop artist who wasn’t churning out product, he was creating art, not product. His records, self-produced and often with just him playing the music, were groundbreaking. His androgynous image, taking cues from Bowie and Bolan, was also groundbreaking. Not only was he playing with sexuality, but also race. “Am I black or white, am I straight or gay” as he famously asked in “Controversy.”
His accomplishments were numerous, number one hits, Grammys, an Academy Award, you name it, Prince accomplished it. He smashed through the race barrier on MTV and brought his controversial image and sexual charged songs right into the heartland of America in the early 80’s. His every video was hotly anticipated; everyone wanted to see what he would do next. But Prince followed his own muse, always recording and releasing what he wanted, and not doing the expected. He followed up his most popular album, Purple Rain, with a bizarre psychedelic pop album, Around The World In A Day, that delved deep into his own personal struggles with his self-created mythology and his inner spiritual battles. This was a conflict that would continue to play out for much of his career most famously when he shelved the completed Black Album a week before its release and instead recorded and released the religiously themed Lovesexy, almost as an act of contrition.
Prince’s battle with his record label were legendary, and came to a head with him dropping the name Prince and changing his name to the Love Symbol which graced the cover of his 1992 album as a way of escaping his contract which he dubbed as slavery. The symbol itself was a mixture of the traditional male and female symbol, once again highlighting that the now Artist formerly Known as Prince would not be defined as merely male or female, but he embraced both sexes. The Artist was now free to release music as often as he liked and celebrated with a sprawling triple cd set, Emancipation.
While he continued to release fine albums throughout the 2000’s he began to fade from the public eye, before his late career renaissance which saw the release of 4 albums in the last 18 months as well as wildly successful tours and culminating in his final solo tour which featured just him and a piano on stage. Prince was once again at the forefront of the music industry and his death came at a time when his every move was once again celebrated and anticipated.
His name is Prince and he is funky. He will be missed more than he could ever possibly know. I keep going back to the last song from one of his more underrated albums, 1986’s Parade:
“Sometimes It Snows In April”
Tracy died soon after a long fought civil war,
Just after I’d wiped away his last tear
I guess he’s better off than he was before,
A whole lot better off than the fools he left here
I used to cry for Tracy because he was my only friend
Those kind of cars don’t pass you every day
I used to cry for Tracy because I wanted to see him again,
But sometimes sometimes life ain’t always the way
Sometimes it snows in April
Sometimes I feel so bad, so bad
Sometimes I wish life was never ending,
And all good things, they say, never last
Springtime was always my favorite time of year,
A time for lovers holding hands in the rain
Now springtime only reminds me of Tracy’s tears
Always cry for love, never cry for pain
He used to say so strong unafraid to die
Unafraid of the death that left me hypnotized
No, staring at his picture I realized
No one could cry the way my Tracy cried
Sometimes it snows in April
Sometimes I feel so bad
Sometimes, sometimes I wish that life was never ending,
And all good things, they say, never last
I often dream of heaven and I know that Tracy’s there
I know that he has found another friend
Maybe he’s found the answer to all the April snow
Maybe one day I’ll see my Tracy again
Sometimes it snows in April
Sometimes I feel so bad, so bad
Sometimes I wish that life was never ending,
But all good things, they say, never last
All good things that say, never last
And love, it isn’t love until it’s past
May U live 2 see the dawn.
-feature by Kevin Poindexter

3 thoughts on “His Name is Prince and He is Funky!”