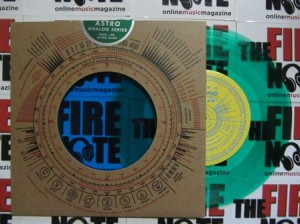 Man or Astro-Man? return with their second installment of new material in their Analog Audio Series. Two of the three tracks here will appear on their upcoming full length due out this summer.
The A-Side here gives you “Communication Breakdown Pt II” that starts things off with what sounds like a spaceship landing and laser firing before the thunderous surf guitar hits like a big wave. The Devo like vocals keep the track moving and the line “Radio is down we’ve lost communication” will soon be in your head. The track also has has a little hidden Elvis Costello “Pump It Up” guitar line in it as well. The B-side “All Systems To Go” is an instrumental piece that contains a robotic sounding guitar attack that possesses a slow rumble intensity. The second track here on the b-side is the exclusive to this release, “Chemical Cats” which is a heart pounding instrumental that is full of big riffs and a solid foot tapping beat.
The 7-inch is similar to Vol. 1 and is packaged in a designed custom chipboard, die-cut cover with an acetate window and sealed with a foil sticker. It was recorded by Steve Albini at Electrical Audio, cut direct to lacquer at Chicago Mastering Service and its stylistic artwork is by Aaron Draplin. There was a clear wax version which was limited to 200 copies and is no longer available. This light green version is exclusive to chunklet.com and is still available. Of course for traditionalist there is also a black version you can snag.
Man Or Astro-man?: Analog Series Vol. 1 [7-Inch Feature]
Man Or Astro-man? Website
Man Or Astro-man? Facebook
Chunklet Industries
-Feature by Christopher Anthony