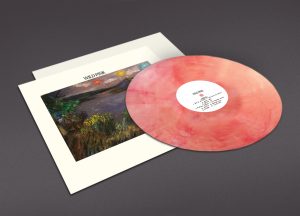 Wild Pink released their debut EP, Good Life, in the Summer of 2015. It was memorable introduction to the band’s brand of introspective indie pop/rock. The band has now completed their full length and grabbed Justin Pizzoferrato (Dinosaur Jr., Speedy Ortiz, Kindling, Sweet John Bloom) to record the tracks. The band’s Self-Titled debut LP, is slated for release February 10, 2017 on Tiny Engines.
This album could shake out to be one of the better indie records of next year so now is the time to act on the limited vinyl. The first pressing of 500 is broke down into 200 Americana (mailorder exclusive)(pictured) and 300 on Opaque Lavender. You can also bundle it with a limited cassette of their 4 song release that came out this past October. 50 Clear w/ Clear Liner, 75 Light Blue, and 125 Light Pink. You can pick either up HERE.