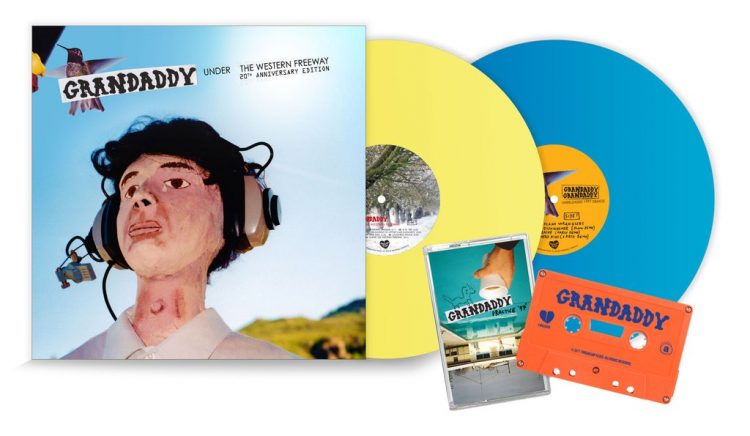 This vinyl-only reissue features a gatefold jacket with two pieces of colored vinyl: one featuring the original record, as it was intended, and the other an eight-song collection of demos from 1997, never before released.
The demo LP includes sketches of songs that became fan favorites, like “Bjork ELO Xanadu and the Birth of Chartsengrafs” (which would make its debut on the band’s groundbreaking follow-up, the Sophtware Slump) and the fan-favorite “For The Dishwasher.” The deluxe package is complete with a booklet of personal band photographs, flyers from the era, and liner notes by Gruff Rhys of Super Furry Animals.
You can order a copy HERE.
LP 1: Under the Western Freeway
01A Nonphenomenal Lineage
02A A.M. 180
03A Collective Dreamwish of Upperclass Elegance
04A Summer Here Kids
05A Laughing Stock
06A Under the Western Freeway
07B Everything Beautiful Is Far Away
08B Poisoned at Hartsy Thai Food
09B Go Progress Chrome
10B Why Took Your Advice
11B Lawn & So On
LP 2: Unreleased 1997 demos
01A Hawaiian Island Wranglers
02A For the Dishwasher (Slow Demo)
03A Dying Brains (Early Demo)
04A Summer Here Kids (Early Demo)
05B Le symphonique d’HeeHaw
06B Street Bunny (Fluffy Distortion Demo)
07B Bjork ELO Xanadu and The Birth of Chartsengrafs
08B Laughing Stock (Revelation Demo)
Grandaddy: Practice ’97
Limited, exclusive cassette features eight unreleased recordings from a 1997 Grandaddy band practice. The only thing missing is the beer. Limited to the first 250 orders.
SIDE A:
1. I’m Not Alright
2. Summer Here Kids
3. Taster
4. I’m In Love With No One
SIDE B:
1. Everything Beautiful is Far Away
2. Street Bunny
3. Lawn & So On
4. Levitz