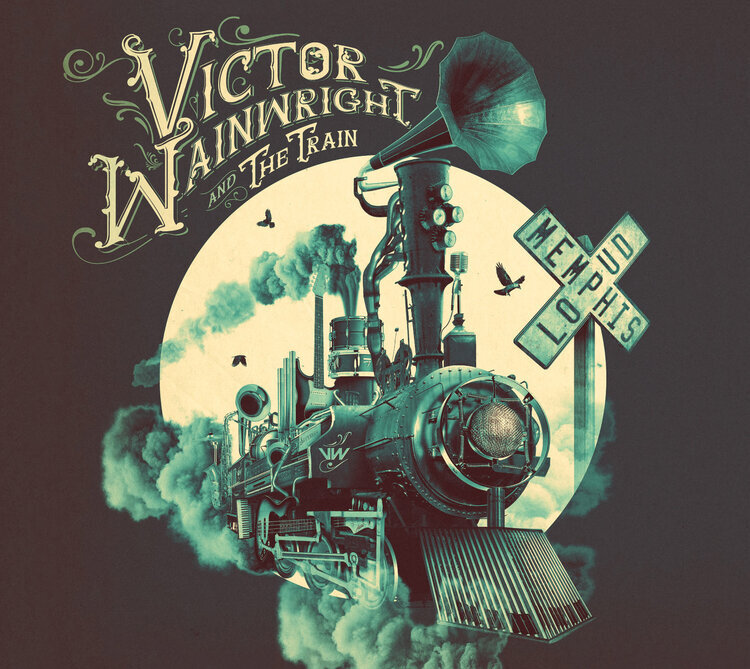 Keyboard player Victor Wainwright may have grown up in Georgia, as he suggests in the title from his 2005 debut Piana from Savannah, but as he sings on the title track of his new album he is now Memphis Loud. That track alone goes a long way toward explaining why Wainwright has consistently won the Blues Music Award for the honor of being the “Pinetop Perkins Piano Player of the Year,” for his knuckle jamming rockin’ rollin’ dominance of the 88 keys with his flying fiery fast fingers. But for all the skill Wainwright exhibits as an ace instrumentalist of the finest quality, the 12 songs on display on his seventh album, reveal he’s a very capable songwriter, and perhaps more importantly has put together a great band of supportive players in The Train and other musical guests, and collaborates on arrangements that allow the band to shine, from great horn arrangements to smart soloing by a variety of his friends.

On the trio of opening tracks – “Mississippi,” “Walk the Walk” and “Memphis Loud,” Wainwright & Co. bring the boogie woogie, the soul and funk inflected rowdy sounds that remind you why Memphis became the historic breeding ground/musical melting pot where the roots music of America – blues, gospel, jazz, and country – became rock & roll. In the slinky “Sing,” Wainwright channels Dr. John with his vocal and piano runs, while the brass section imports some of that New Orleans vibe. It’s a winning combination.

But just about the time you figure, Wainwright’s aiming the be the party band to beat all party bands, he slows it down with the soulful, bluesy ballad “Disappear,” and delivers a heart-rending vocal and leans into some Hammond B3 swells to accompany his sterling piano playing, while guitarists Dave Cross and Greg Gumbel deliver exhilarating solos as the song’s coda stretches out. Wainwright has the skills to deliver what entertains, just check out the intro to “Golden Rule” which plays on the familiar groove at the front end of a Blues Brothers’ show, before the song shifts into a big soul rave up celebrating the cooperative spirit of human kindness. And he’s not above a funny song about man’s best friend, “My Dog Riley,” or a difficult turn in life that leaves on looking at the “South End of a North Bound Mule,” but he’s sensitive enough to deliver a down to earth romance song in “Creek Don’t Rise,” and sit “America” down for an intervention, which also gets help with a strong guitar solo from Cross again, as well as special guest Monster Mike Welch.

So there’s a lot going on here musically, with the significant talents of The Train mostly tracking live in the studio together, but at the heart of many of these fine songs is Wainwright both as a spirited singer and a piano player extraordinaire. The Train includes drummer Billy Dean and bassist Terrence Grayson, guitarists Pat Harrington and Dave Cross, and Mark Early on saxes and clarinet. Toward the end, two of Wainwright’s stronger songs address “Recovery,” a soul rave-up” and “Reconcile,” a slow blues that builds and builds with echoes of Southern Rock classics as it stretches out for 8 and a half minutes. Victor Wainwright and The Train are the real thing, authentic big band Americana in the best rock & soul, boogie woogie tradition of Memphis, and as such should be considered a national treasure if not a dying breed.