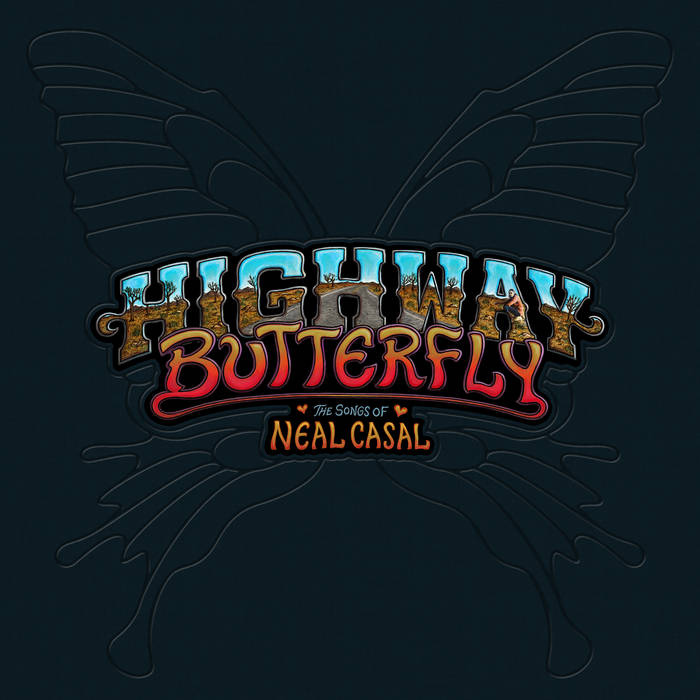 There’s no way to avoid the bittersweet feeling that hovers nearby this lovely collection of songs by noted guitarist and songwriter Neal Casal, recorded by friends and fans as a tribute to his legacy as a respected musician and collaborator, who ended his own life in 2019 at the age of 50. Casal, like lots of hired gun guitarists, is likely best known for those he’s played with and for, a veritable who’s who of roots, Americana, and jam band musicians. From 2012 – ’19 he played with the Chris Robinson Brotherhood, from ’07 – ’11 he was with Ryan Adams and the Cardinals, he played in bands Hazy Malaze, Hard Working Americans, GospelbeacH, and Circles Around the Sun, made a dozen solo albums, and played on albums by Willie Nelson, Lucinda Williams, Amanda Shires, and a host of others, and even played Gwyneth Paltrow’s guitarist in the movie “Country Strong.” Just days before his death, Casal performed at the LOCKN’ music festival with his band CATS, and later that night sat in with Oteil Burbridge & Friends, the Dead & Co. bassist’s jam band that included Bob Weir, Duane Betts, and others.

And while you may have heard Casal playing guitar with any of these others (pretty sure I’ve only seen him play with Adams & the Cardinals), I was totally unfamiliar with his solo recordings and songwriting before hearing Highway Butterfly. And given the 41 songs – on 3 CDs or 5 LPs – it’s striking what a delightful body of work he created, and the added bonus is all the performances by many of Casal’s collaborators and friends. Circles Around the Sun appear on two tracks, “All the Luck in the World” with singer/guitarist Billy Strings, and the instrumental “Bird With No Name,” with jam band guitarist Jimmy Herring, who was in Widespread Panic, and has played with The Allman Brothers, The Dead, and Phil Lesh and Friends. And there are other representatives from the Allman and the Dead clans as well. Warren Haynes adds some ABB flavor to “Free to Go,” Derek Trucks and his wife Susan Tedeschi turn in a tender rendition of “Day in the Sun,” and ABB offspring, The Allman Betts Band bring that next generation feel to “Raining Straight Down.” Bob Weir and friends deliver “Time and Trouble” with a bold walking bassline, Phil Lesh & the Terrapin Family Band serve up “Freeway to the Canyon,” Oteil Burbridge & Friends play “Superhighway,” and the album’s title track, “Highway Butterfly” by Steve Earle & The Dukes.

Other highlights include “Traveling After Dark” by Aaron Lee Tasjan, “Need Shelter” by Jaime Wyatt, “Time Down the Wind” by Hiss Golden Messinger, “Maybe California” by Shooter Jennings, and “Death of a Dream,” which gets the Dino Jr. treatment by J Mascis. There’s only one song included in this collection that is not written by Casal, it’s “Detroit Or Buffalo,” written by Barbara Keith and performed by Jonathan Wilson with Hannah Cohen, which I imagine is included for this lyric: “God knows everybody’s gotta go sometime/So I’m taking this train to the end of the line/Missing every mile that friend of mine/I haven’t been too well myself/A lot of time on the shelf/Saying that I don’t need help when I do/But you know I’m gonna be just fine/A lot of friends a little wine/But still I wish I could see you again sometime.”

Given the care and attention given to the curating and placement of these songs, it’s telling that this song follows Casal’s “Feel No Pain,” which includes this telling testament to the songwriter’s inner struggle: “Now I see the world through such tired eyes/But I don’t know why/But maybe I can trace it to the time/When their dreams became my lie/And now it’s up to me to try/Try to face up to the truth somewhere inside… So come and see me later on/You know where I’ll be/Singing these songs out by the barn/Hoping that they’ll heal me… With no help from above/You’ll feel no pain/With all your love to guide them on your way/Every day/They will feel no pain.” Which points to the mission of the Neal Casal Music Foundation,” which was created to inspire future musicians, for which the non-prophet donates music instruments and lessons to school students from New York and Jersey where Casal grew up. The second part of that mission statement is a commitment to support mental health organizations, especially those that provide care to musicians in need.

In addition to introducing the listener to all these great songs by Neal Casal, smartly and lovingly produced by Widespread Panic’s Dave Schools and Jim Scott, beyond the great performances by artists we’ve been following for decades it’s all the other less-well-known singers and musicians we’re introduced to throughout this long project that’s a real plus. And all profits from the sales of this collection support the work of the Music Foundation. To lose an artist like Casal, one so beloved and appreciated, especially this way can feel like such a tragedy. But this amazing collection of his life’s work, and the cause that it benefits, like lots of great art and music turns heartbreak into something beautiful, pierces the darkness with the gift of a sustaining light.

Key Tracks: “Day in the Sun” by Susan Tedeschi and Derek Trucks / “Need Shelter” by Jaime Wyatt / “Free to Go” by Warren Haynes