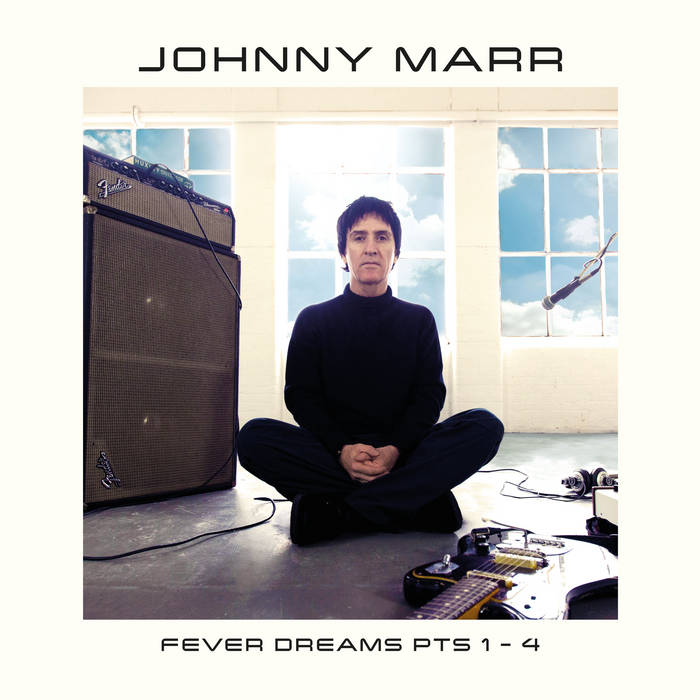 While it’s only natural to look for echoes of The Smith’s in Johnny Marr’s solo work, he was only with that band for 6, albeit, very productive years, and in the decade that followed he cut a wide musical swatch playing in bands as diverse as Modest Mouse, The The, and Electronic, while played guitar for The Pretenders, and on albums by Talking Heads, Billy Bragg, Bryan Ferry, Beck, Oasis, and Pearl Jam. We tend to associate Marr’s sound with the jangly 80’s Manchester sound that many have copied, but obviously he’s been all over the modern genre map in his nearly 40-year career, the proof on full display over the course of his 16-track double album, Fever Dreams Pt. 1-4. The album was originally conceived as 4 separate EP’s, but after releasing the first two late in 2021 he’s added in the two remaining bits, combining them to make his fifth solo album.

“Spirit Power and Soul” opens with a bold, high-energy mix of synthetic dance rhythms and Marr’s echo-y, edging-up-toward-feedback guitar sound, and a hooky sing-along chorus designed to get a huge response on the festival stages this summer. Curiously enough, after Marr played a set in support of his last album, Call The Comet at the Glastonbury Festival in ’19, he joined The Killers’ on stage for two encores on “The Charming Man” and “Mr. Brightside” earning rave reviews. In addition, Marr was called in by Hans Zimmer to play the guitars on the soundtrack for the latest James Bond film, “No Time to Die,” and you can hear that cinematic influence make its way into the big rock sound “Receiver,” in the sweeping dramatic strings of “Ariel,” and the spooky ambiance of “Rubicon.”

In many ways, this long album’s numerous tracks facilitate Marr’s interest in touching numerous aspects of his expansive musical history. “Tenement Time” looks back to the days of his Manchester youth with echoes of Joy Division, while “Sensory Street” bounces around the big 80’s synth/wave sound of DePeche Mode, and “Hideaway Girl” mixes a harder edge with a psychedelic goth vibe. “Counter-Clock World” seems to tip a hat in the direction of The Strokes’ clubby, power-pop feel, while “Ghoster” decompresses with a haunting drum & bass dance groove that would play well with Radiohead. “Lightning People” has a trippy, psychedelic feel with a bouncy pop song hidden inside, similarly “Speed of Love” ironically slows down for a more ambient trance-y feel, while “Night and Day” percolates with a punchier beat, while “God’s Gift” did have me thinking about The Smith’s for more reasons than just Mr. Marr’s guitar sound.

Fever Dreams Pt. 1-4 really gives Johnny Marr a lot of running room, and he seems intent on hitting a lot of the musical high points in the last three or more decades, displaying his versatility as both a singer/songwriter and one of his generation’s most distinct and talented guitar talents. As the record nears its end, Marr gives it one final power-pop run through “The Whirl,” and then on the acoustic folk rock of “Human,” he gets up close and personal. The album’s title may suggest a pandemic era effort, the songs throughout are more focused on the party we’ll have when we step out of isolation and return to full engagement: body, mind, and spirit.