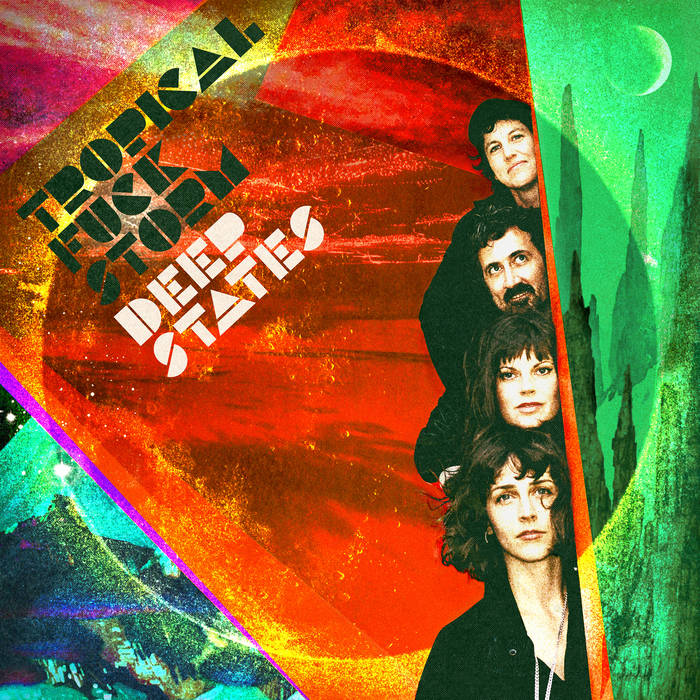 Australia’s Tropical Fuck Storm continue to be one of the most interesting groups on the indie scene with their new third album, Deep States. I say this because their style is disjointed and sometimes weirdly hard to capture in one setting. At times, their music gasps for air but still gets your notice as the band also has much to say from a political stance. For some bands, that “sit with me for several spins” and “political views” is a invite for fans to runaway but TFS keep your attention because every song on Deep States is unpredictable.

When the band is on they are on fire as the second track here is “G.A.F.F.” which is one of the catchiest tracks the band has released. Vocalist Gareth Liddiard is in full form on this song as he raps along the lyrics to the angular beats with pointed lyrics like “Nazis hate pinkos hate MAGAts in the park; When they’re killing one another, you can tell them apart” and “What else could go wrong? My black swan’s got fleas; I’ve got a nasty case of give-a-fuck-fatigue.” All of this with the female shout out background vocals and the machine gun style drumming that pops up throughout the song makes the track a must listen. Another highlight on the record is “The Donkey,” which finds the band building up the track from a crawl to a noisy mess conclusion that includes some scorching guitar during its last third and the Nick Cave like croon from Liddiard as he is the ringmaster of the chaos that completely works!

Deep States has plenty going on and in multiple directions. Some of the avenues did not grab my ear as much as others but I will say TFS is one band that can unbalance you from track to track but never makes you fall off. That is good but finding a bit more transition or connection from song to song would have helped me more especially as its 10 songs have a runtime of a lengthy 51 minutes. Considering the weird and bizarre place the world is right now, Tropical Fuck Storm present a legitimate viewpoint that will make you think for sure. The band also comes out of Deep States with their expected edge as this album will grow on you with repeat listens. That kind of energy will always keep my interest for what is next and Tropical Fuck Storm always tell you a story that you will want to hear when the next chapter is released!

Fire Track: Lily Konigsberg – “That’s The Way I Like It”