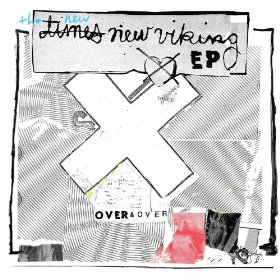 Fire Note Says: Times New Viking make a triumphant return to Siltbreeze with their new EP!
Album Review: You Can Never Go Home Again is the name of a posthumous book by Thomas Wolfe, in which he famously stated that once you have left your proverbial country home for the big city, you can never return to the simpler life you left behind. After stints on mega indies Matador and Merge, Times New Viking are proving that you can in fact go home again, and flourish while you are at it! In fact other than the label name, there isn’t much to differentiate their new ep, Over & Over, from any other of their work on those labels. After all, it’s not like they ever really cleaned up their sound on those albums, particularly Rip It Off [2008], which is probably the LOUDEST album I own. Now back on Siltbreeze, their home from 2005-2007, Times New Viking have put out this 6 song, 14 minute ep, and surprise, it’s maybe the most perfect thing they have ever released.
The Columbus, Ohio trio still sounds grimey and lo-fi, but their arrangements and songwriting have never been better. Maybe this stuff just sounds better covered in fuzz, I don’t know, but my ears are loving it. Adam Elliott’s singing has grown more confident over the years, and his voice now sounds strikingly like his brother, Kevin, who was the front man for late great 90’s band 84 Nash (find Band for Hire if you can). Beth Murphy’s voice is still as strong as ever, and their two voice’s mesh together well to give them a sound all their own. Musically, they owe a lot to the greats, Sonic Youth, The Clean, Yo La Tengo, and Guided By Voices, but never really sound like anyone of those bands, just a perfect hybrid of all of them.
The first track, “Sleep-In”, starts with a bang, bounding along at a fast clip, and has more of a New Zealand sound than I was expecting. The pairs vocals don’t quite match up, and the song is better for it, it makes it sound looser and a bit disjointed, more raw. “Middle Class Drags” has a really fat and catchy guitar riff, courtesy of Jared Phillips, and has a really great hook to boot. Over & Over sounds like what Dancer Equired [2011] would have sound like if they had left in just a bit more distortion in the mix.
Key Tracks: “At The Bars” / “Sleep-In” / “Middle Class Drags”
Artists With Similar Fire: No Age / The Clean / Yo La Tengo
Times New Viking Website
Times New Viking Facebook
Siltbreeze Records
– Reviewed by Kevin Poindexter