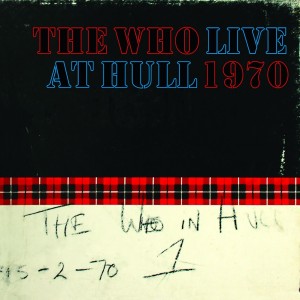 Fire Note Says: See Me, Feel Me, Touch Me, Release Me.
Album Review: Originally released as part of the Deluxe Edition of Live at Leeds in 2010, The Who-Live at Hull 1970, has finally been given its own standalone release! Recorded the night after Leeds, February 15th 1970, the Hull show stands on its own as a powerful testament to the ferocity of the Who at the absolute peak of their powers. In fact, if Hull had been released instead of Leeds, this would easily be considered one of the finest live albums of its era. However, due to problems with the recordings, this was never going to happen. John Entwhistle’s bass tracks were somehow not recorded on the first six songs of the night. Thankfully due to the fact that the setlist was virtually the same, and the performances were nearly identical, using modern technology, the producer was able to “airlift” in his bass tracks from the night before, and mesh them perfectly with the rest of the tracks. I never would have known this if it wasn’t in the liner notes, it sounds perfect.
I’m not going to dissect the music too much, odds are good if you’ve gotten this far, you know the songs and are familiar with Live at Leeds enough to be curious about this new Live at Hull. Instead, I want to talk about what makes this different and nearly as essential as Leeds, and why you need it. The most startling difference between Hull and Leeds is the drum work of the late great Keith Moon. For me personally, his drumming was always the highlight of Leeds. He is up front and center in the mix once again, almost as the lead instrument. What’s really interesting is that the fills he plays are completely different than they were only the night before. He is all over his kit, and at points you can hear his sticks hitting the mics as he is going ballistic. For me, the differences in Moon’s playing alone make this worth owning. The energy of the crowd is different, they are a bit more low key, and though it doesn’t affect The Who’s playing, it does affect their between song banter. They move from song to song without much dialogue. It’s BAM BAM BAM, hit after hit, whereas on Leeds, Pete Townshend was very talkative with the crowd.
There are two big differences on disc one musically, first, the band didn’t end the set with “Magic Bus”, which by all accounts was rarely played, so many think it was a reward to the wild crowd at Leeds, and two, “Shakin’ All Over” breaks down into the classic blues jam, Spoonful, in the middle, before coming back at the end. Other than that, the highlights are the same, a smoking version of “A Quick One While He’s Away”, The hit trio of “Substitute”, “Happy Jack”, and “I’m a Boy”, and the smoking 16 minute version of “My Generation”. All of disc two is devoted to a live rendition of Tommy. Tommy is where Roger Daltry’s pipes really shine. His voice is in excellent form here, and this is really his showcase. If you’re as big a fan of that album as I am, you need to hear this. It’s remarkable that these four guys can pull off a piece this complex in a rock concert setting and not lose any of the energy of their live show. They really nail it, particularly with “Overture”, “Amazing Journey”, “Sparks” and “We’re Not Gonna Take It”.
This is a great sounding live album, every bit the equal to Leeds in fidelity, and far superior to the Isle of Wight performance from later in the year in every way imaginable. I can’t recommend this album enough, to both diehard Who fans who are already familiar with this material, and particularly to newcomers, who really have no idea of the transcendent rock experience this set has to offer. Go check this out now!
Key Tracks: “We’re Not Gonna Take It” / “A Quick One While He’s Away” / “Amazing Journey”
Artists With Similar Fire: Guided By Voices / The Jam / Jimi Hendrix
The Who Website
The Who Facebook
Universal Music Group
– Reviewed by Kevin Poindexter