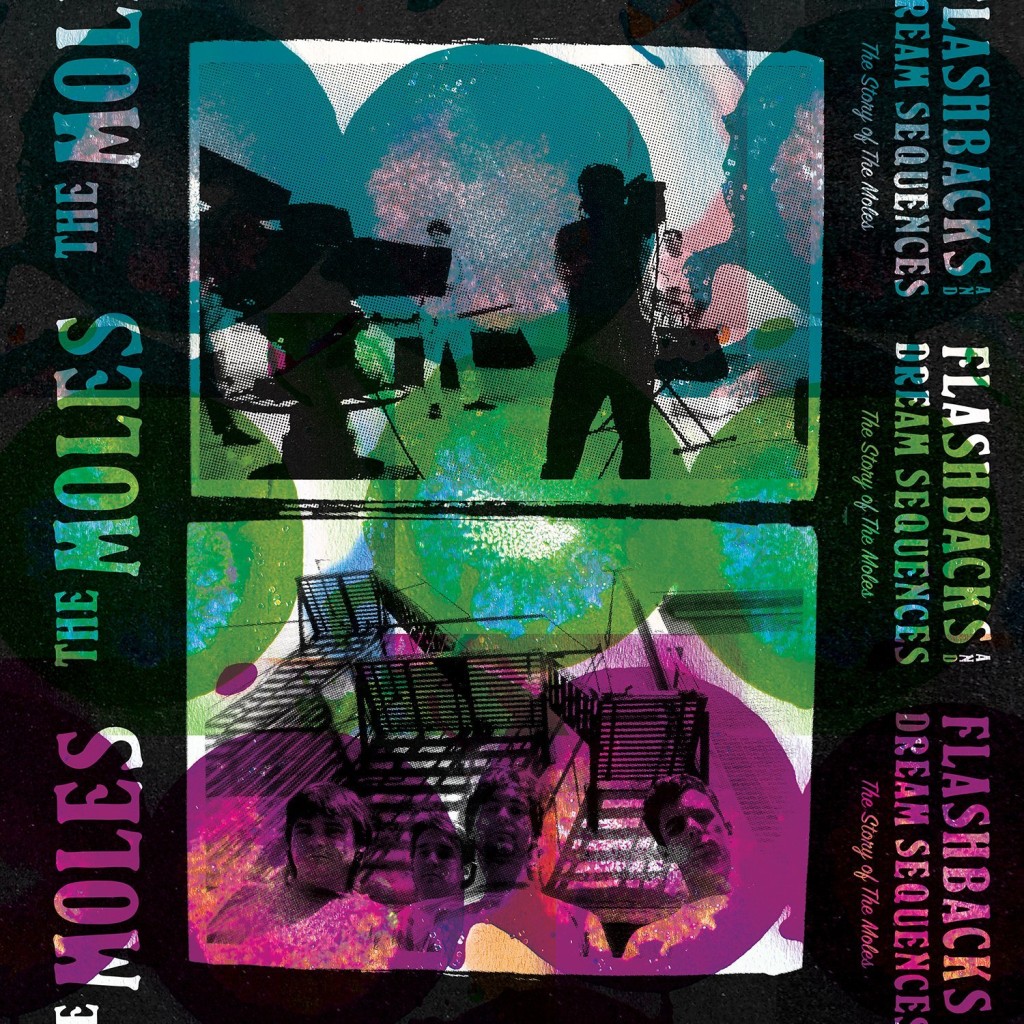 The Moles
Flashbacks And Dream Sequences: The Story of The Moles
Fire Records [2014]

Fire Note Says: Amazing career retrospective from one of the great “lost” bands of the 90’s.
Album Review: Are The Moles one of the great lost bands of the 90’s? Fire Records makes a strong argument for this with the release of Flashbacks And Dream Sequences: The Story of The Moles, a handsome double album and two cd collection of their entire recorded output. You may know Richard Davies from his stint in Cardinal or his 2009 collaboration with Robert Pollard as Cosmos (if you aren’t familiar with either of these, rectify that immediately!) Davies has a unique gift for melody and experimentation, which go hand and hand to form his signature sound, off kilter, catchy indie pop equally influenced by the Beach Boys and The Velvet Underground, making them contemporaries of bands like The Clean and The Bats.
The first album is a reissue of Untune the Sky, which had been long out of print. Previous reissues have added bonus tracks and messed up the original sequence of the album, here it is back in all of its original glory! This record is an eye opener. I had tracked down a used copy of the bands second lp Instinct a number of years ago, and while it is really good, this one is on another level entirely. “Wires” opens the record with a droney bagpipe and guitar and vocal. When the drums hit, it pulls the whole song together. This is perfect pop music in my world and it only gets better as the album goes along. This is like finding another Cleaners From Venus record, or what it felt like the first time I heard The Clean. How have I possibly lived this long without loving these songs? “Surf’s Up” is the first of two songs on the record that name check the bands influences without being cover versions, while it sounds nothing like The Beach Boys original, it’s nearly as ambitious. “Bury Me Happy” and “Nailing Jesus to the Cross” close the album with a striking one-two punch. One is a happy pop song, and the other is moody experimental soundscape. I’ll let you guess which is which. The price of this set is worth it for this album alone, but there is so much more here!
Instinct, the second album, is a bit more arranged and musically hints at the orchestral pop the Davies would explore deeper on the Cardinal lp. Instinct sounds like a more fractured take on Pet Sounds or Smile. The horns on “Minor Royal March” hint at the greatness to follow. They also serve as a notice that this is going to be a different sounding record by The Moles. This is more experimental arranged pop, and less guitar driven pop than Untune the Sky. That’s not to say that the guitar is not the primary instrument on the record, just that these aren’t chugging fist pumpers, these are more like moody, middle of the night pop songs. Alternating between sketches and full blown pop arrangements, it all blends together well to form a cohesive whole. This one isn’t quite as impressive as Untune the Sky, but it’s still quite good.

The ep tracks that are also included hold some of the real gems in the bands catalogue. “What’s the New Mary Jane”, the second song to name check one of their influences, is not a cover of the Beatles White Album outtake, but an attempt to claim the song title from the fab four, and make it their own. This one just might be the best song on the whole collection. In fact, the entire four song The Moles ep stands out as a highlight of their discography. Moving effortlessly from indie pop to experimental psych pop, to bizarre sound collages, it holds together remarkably well, it’s a wild ride, and one well worth taking. The Tendrils and Paracetamol ep is another set of 4 great songs. The Moles were unquestionably a great ep band, working well in 4 song runs. In fact, one could make an argument that you could listen to each side of their two proper albums as 4 song eps.
I can’t say enough wonderful things about this set. Flashbacks and Dream Sequences is a must own, it perfectly encapsulates one of the great lost bands of the 90’s in one nifty package. Though originally released on Record Store Day, this one has also seen a cd and digital release, so if you aren’t able to track down a vinyl copy, you should be able to easily get a copy in another format. This one is a jawdropper. Go buy it.
Key Tracks: “What’s the New Mary Jane” / “Bury Me Happy” / “Nailing Jesus to the Cross”
Artists With Similar Fire: The Clean / The Bats / Cardinal