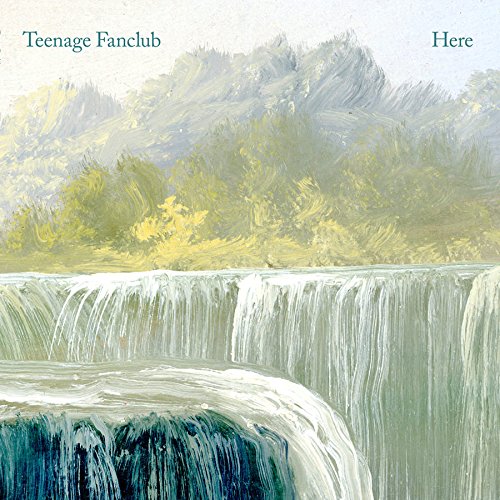 Fire Note Says: Teenage Fanclub return with a familiar power pop sound.
Album Review: Scottish alternative rockers, Teenage Fanclub, are best remembered for breakout albums like Bandwagonesque, Grand Prix, and Songs from Northern Britain, which all appeared in the band’s 90’s heyday when their brash power-pop instincts were in full flower. Here, well, on Here, two decades later, you can still hear echoes of Alex Chilton’s Big Star in the opening tracks “I’m In Love” and “Thin Air,” but much of the recording is dominated by singer/songwriter pop rock of the 60s & 70s reminiscent of David Crosby’s work with The Byrds, prior to Crosby, Stills & Nash.
It’s been six years since the last Teenage Fanclub album, but it’s worth pointing out that over the years, songwriters Norman Blake, Gerard Love and Raymond McGinley, who trade off lead vocals and blend their voices together elegantly in 3-part harmonies, have grown increasingly adept and focused, while moving in directions that are decidedly more subtle and thus, quieter. “Hold On” and “The Darkest Part of the Day” have a timeless quality, but echo 60’s rock’s roots right down to the chord progressions, and McGinley’s guitar solo on the latter laid over the symphonic orchestration that accompanies the track.
You can hear hints of psychedelic rock in the ringing tones of “I Have Nothing More to Say” and “Steady State,” and dreamy folk rock in “I Was Beautiful When I Was Alive” and one of the album’s strongest tracks, “First Sight.” Many of these new songs emphasize subtle melodies, nuanced production and the occasional soaring guitar riff. The guitars solos in “Live In The Moment,” another 60’s throwback, and “It’s a Sign” find McGinley leaning toward the fuzzy overdriven guitar tones of yesteryear, made all the more retro by the groups reliance on tried and true progressions and old school use of vocal harmonies.

And the consistency and refinement are not merely musical characteristics, but show up routinely in the band’s lyrical affirmations, many of which look back only to celebrate the current moment, to awaken the listener to the Here and now. The three songwriters whose creative energies give focus to Teenage Fanclub’s maturity and satisfaction with their place in this time of their lives. While there’s a rather direct romantic quality throughout, there’s case to be made that it’s not a cliché if the feeling expressed is sincere and authentic.
For long time Teenage Fanclub fans, there’s enough potent pop/rock here, but presumably you’ve aged and matured alongside the band, so these more focused, albeit somewhat predictable tracks will feel comfortable and familiar… alive in this moment, right here and right Here.
Key Tracks: “I’m In Love” / “Thin Air” / “The First Sight”
Artists With Similar Fire: Fleet Foxes / The Byrds / Crosby, Stills & Nash
Teenage Fanclub Website
Teenage Fanclub Facebook
Merge Records
-Reviewed by Brian Q. Newcomb