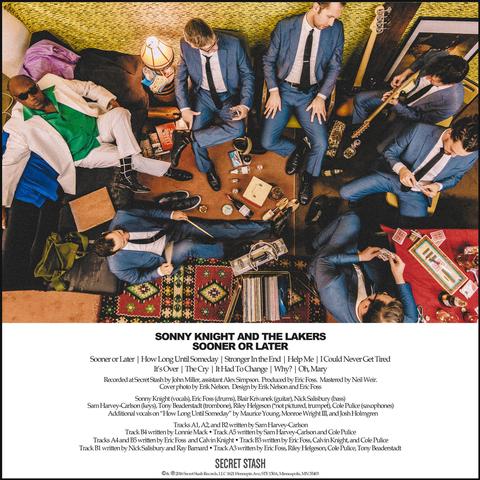 Who: Sonny Knight is a 68-year-old retired truck driver that sings his soul out on his sophomore record accompanied by his multi-talented 7-piece band, The Lakers.
Sound: Sonny Knight has a very traditional soul/R&B sound that is in the wheelhouse of Daptone talents like Charles Bradley, The Frightnrs and the late great Sharon Jones.
TFN Final Take: We sort of came into Sonny Knight & The Lakers a little late to catch his excellent 2014 debut, I’m Still Here, but we were super excited to find out (although late again) about this sophomore effort, Sooner Or Later which released near the end of last year. What you get is an even more confident record that oozes heart and passion from every chord, every lyric and every last breath. This is exactly what you want from this type of record because even though in band years – Sonny Knight & The Lakers are newbies, Knight brings a lifetime of love, loss, wisdom and rising above to the studio experience.
Sooner Or Later benefits from this expertise and the previous tour testing of these 10 tracks because they all feel and sound classic. The record also does not just survive on the more expected soul groovers but blends in a little country, gospel and blues. The latter being highlighted on their superb cover of blues/rock guitarist Lonnie Mack’s “Why?,” as The Lakers showcase their ability to simmer and then the song allows Knight to bust open his pipes at just the right moment.
I guarantee if you give Sooner Or Later a play, you will be hooked. This album makes you want more of everything. More horns, more vocals, more quiet, more crash and of course – more Sonny Knight. Right down to the last track, “Oh, Mary,” Knight pleads “Mary don’t you wait for me.” I will tell you though, Knight’s passion and delivery will not have you going anywhere!
Also – special shout out to Secret Stash Records for this one. They are a top-notch label that you should support!
Sonny Knight & The Lakers Website
Sonny Knight & The Lakers Facebook
Secret Stash Records
– Reviewed by Christopher Anthony

The Friday Fire Track: Tim Kasher – “An Answer For Everything”