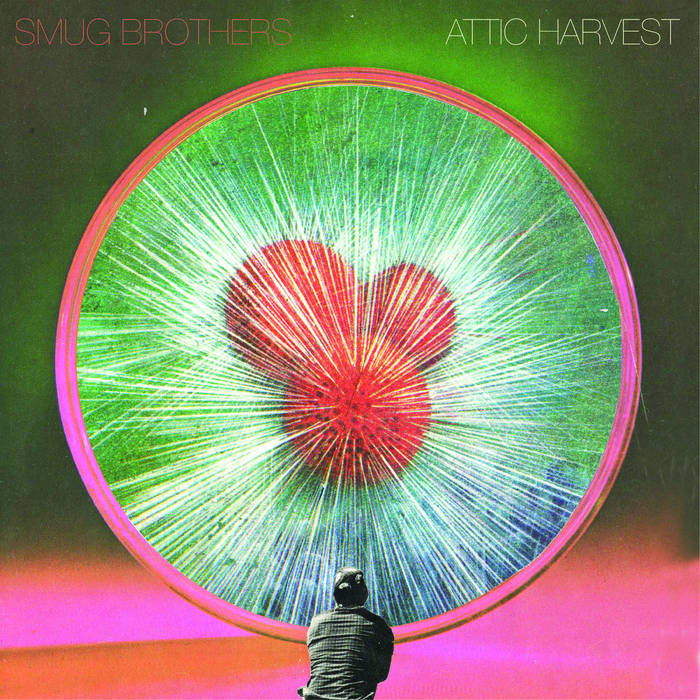 Who: Dayton, Ohio-based Smug Brothers make a dream come true and finally release an album on vinyl. Attic Harvest is a dream for us listeners, too.
Sound: Attic Harvest features a new lineup for Smug Brothers, but not to worry, Smug Brothers still showcase catchy and charming lo-to-mid-fi songs from Kyle Melton.
TFN Final Take: Attic Harvest sees some rather drastic changes for Smug Brothers. The lineup has shifted from a quartet, which last recorded Disco Maroon and the Stray Domino single, to a trio for this outing.
It is sad to see former band members, Larry Evans and Brain Baker move on to other things, but Don Thrasher (ex-drummer for Guided By Voices) and songwriter Kyle Melton are not ready to call it quits. Smug Brothers enlisted the help of newcomer Scott Tribble to round out the band and to be frank, the resulting album sounds fantastic. This version of the band has recorded some their best and unique songs for this record.
Smug Brothers work power pop magic much akin to Robert Pollard. Much of Attic Harvest has an early solo Pollard feel to it. The songs just float in and stick to your brain. Kyle explores a more psych-rock/pop side with tracks “Where It Got the Doctor,” “What I Knew When I Knew It,” “Operate the Pandemonium Register” and “We Never Gripes.” That exploration fits right into an era of Pollard music that includes Not In My Airforce, Kid Marine and Waved Out.
This also feels like one of the heavier Smug Brothers albums. It is a bit crunchier in places than most of their past albums. Album closer “Messing Around with the Butler” is not messing around when it comes to rocking out. I also think Kyle Melton might have a noise/punk rock record in him. If I can hear more tracks like the stunning ripper, “Globe Hunter Garden Practice,” I would be quite pleased.
At 18 tracks, Attic Harvest may appear rather long on paper, however, it clocks in at just above 35 minutes, making it a rather quick listen. Kyle gets you in and out of tracks on a brisk pace. He hits you with hook after hook, song after song.
I have been a long time follower of Smug Brothers, and it is heartwarming to see them accomplish their goal of putting out an album on vinyl and they picked a great set of songs to commit to wax. Attic Harvest may go down as my favorite Smug Brothers album. I still have a few more listens to go before I make that a definitive statement, but in my short time with this record, it feels vital and unique.
Expect to see Attic Harvest on my Best Albums of 2019 list. It’s a winner!
Smug Brothers Website
Smug Brothers Facebook
Gas Daddy Go! Records
– Reviewed by Daniel Taylor