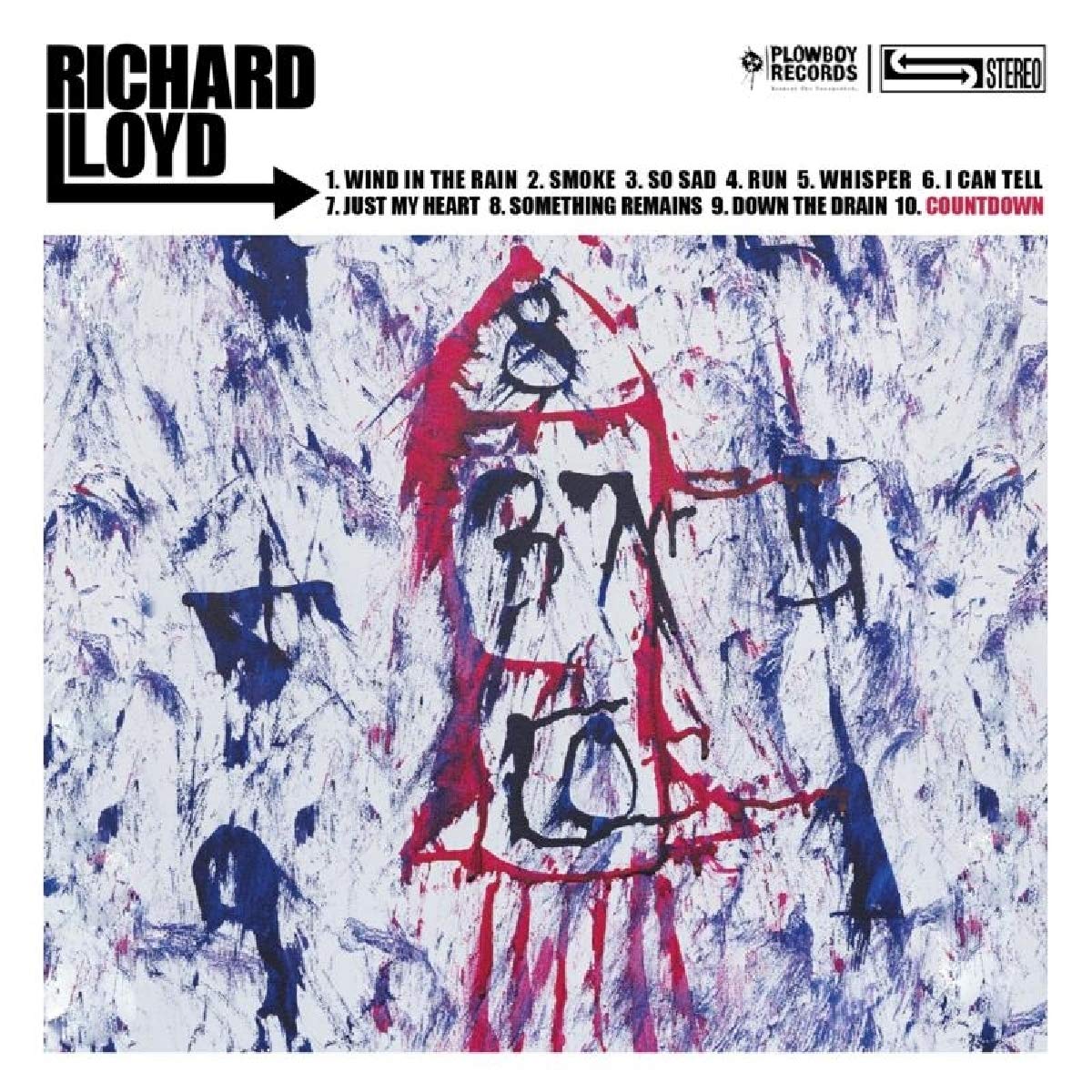 Fire Note Says: Richard Lloyd, formerly of the band Television, and guitarist for Matthew Sweet, as well as the author of one last year’s great rock star memoirs, “Everything Is Combustible,” has a new collection of songs that comes for free inside the just released paperback edition, a solid rock album, The Countdown.
Album Review: It’s a shame, really, that Richard Lloyd is not a household name, like other musicians currently with rock & roll memoirs on the market, like recent good reads by Bruce Springsteen, Elvis Costello, or even his CBGB’s contemporary, Patti Smith. Lloyd’s great book, “Everything Is Combustible: Television, CBGB’s, and Five Decades of Rock and Roll; The Memoirs of an Alchemical Guitarist,” is a smart, witty, fun read that “TimeOut New York” correctly described as “a sex, drugs and rock ‘n’ roll romp, chock full of wildly entertaining vignettes culled from a five decade-long career. I read the hardback version last year, and you’ll be glad to know the paperback version hit the streets just in time for gift receiving, oh and giving, season. And, quite importantly, the newly released version also includes both a new CD of songs by Lloyd, as well as a digital download card of the same album.
For those yet to recognize Lloyd’s name and significance in rock & roll history, you should start with the band Television, which included Tom Verlaine, and in the earliest years Richard Hell. Television was one of the first bands that put CBGB’s in NYC on the map, the punk rock club that gave the world Patti Smith, Ramones, The Talking Heads and more. And it’s worth pointing out that Television’s debut album, Marque Moon, is a must have for any and every rock music fan that appreciates guitar playing; In 2003, British music mag, “NME” declared it the fourth best album of all time, it was listed in “RollingStone” as one of the greatest albums of all time, and “Pitchfork” called it the third best debut album by any band in the 70’s.
Television recorded two albums then broke up, but reformed for another fine album and tour in 1992. Lloyd went on to have a critically acclaimed solo recording career, as well as deal with drug addiction & rehab, but notably played on one my favorite album’s Matthew Sweet’s Girlfriend, which is a great guitar rock album filled with amazing songs. Lloyd also played with John Doe (of the band X), the band Rocket From the Tombs. In short, Lloyd is a great guitarist, with a long and storied career, all of which is laid out in elegant prose in his book, which along with some great stories that give inside looks into some of our rock & roll heroes and the events that shaped them, as well as Lloyd’s whip-smart opinions and philosophical reflections on the nature of life, music, and the universe… I’m planning to re-read the new paperback edition, you should check it out.
As a companion to the book, this new ten song album, The Countdown, Lloyd’s 8th solo album, is a great companion piece, displaying Lloyd’s recognizable guitar sound, and amazing soloing prowess. At 67, Lloyd doesn’t have anything to prove song-wise, so these simple rock song numbers feel like solid bar band rock played by quality professional players: Lloyd on guitars and vocals, Steve Ebe on drums, Dave Roe on bass, Joe Bidewell on keyboards, the album co-produced by Lloyd and Ben Ewing.
Like rock & roll songs going all the way back to the beginning, most of these songs are about “girls,” the desire to connect with the person who is the object of attraction and affection. A song about the “Wind In the Rain” is an excuse to hold her close, the way life and relationship can drift off like “Smoke” is especially relevant because “I still love that girl.” A more philosophical reflection like “Something Remains,” is a reflection about a romance that is long past. This isn’t brain surgery, it’s rock & roll, although I will say it’s rock & roll from a very literate writer, I mean when was the last time you were “in her thrall”?
No, what matters here isn’t the songs, although they’re solid constructions, melodic enough, mildly catchy, so that if you walked into a club and heard this band playing these songs you’d immediately feel comfort in the knowledge that it would be a musically satisfying evening. But where Richard Lloyd’s music far exceeds those bar band expectations is his soloing, he’s a deft, emotionally vibrant and fluent player, a pleasure to hear again, still after all these years.
So, likely this will get published after Christmas, so let me suggest a gift for yourself, spend some of that cash you got from the ‘rents who aren’t sure what to get you. So order the book, “Everything Is Combustible” is a great read whether, like me, you grew up appreciating the bands that got their start in CBGB’s like Blondie, The Ramones, Patti Smith, but Lloyd also tells great stories about meeting Hendrix, Led Zep, John Lee Hooker, Keith Moon of The Who. In music critic Bill Flanagan’s forward he tells a story of a time when Lloyd met Keith Richard’s mother, who told him that his band Television would never be as good as her son’s band, The Rolling Stones. Lloyd agreed, saying “At the end of the day, Keith and I are organ grinders, and Keith has the best monkey.” Of course, you’re going to enjoy reading the book of a guy who thinks like that. But, get the version that includes this new CD, The Countdown, and for that matter if you don’t own Marque Moon, get that too. You’ll thank me later.
Key Tracks: “Wind In the Rain” / “Run” / “So Sad”
Artists With Similar Fire: Television / Matthew Sweet / Sonic Youth
Plowboy Records
– Reviewed by Brian Q. Newcomb