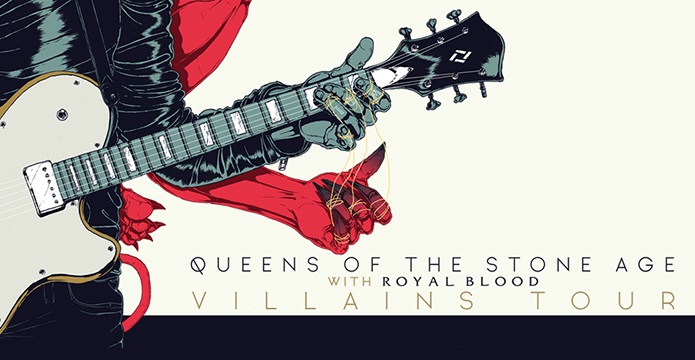 Queens Of The Stone Age: Express Live!, Columbus, Ohio – Sept. 12, 2017
Tuesday evening, as downgraded tropical storm Irma was making her way into Southern Ohio, the lawn and concrete pit of the Express Live! outside stage was filling up with Queens of the Stone Age fans. While it rained much of the evening, it was a light and steady presence that occasional let up, it had little impact on the fans gathered to hear the heavy alternative rock sounds of Josh Homme, and the latest rendition of the band, that in the past has also included luminaries like Mark Lanegan, Nick Oliveri and Dave Grohl.
Of course, there’s no doubt that Homme, the only original member, is running the show. He’s tall, with a rugged demeanor, and a bit of an Elvis-like swagger, and he dominates the band on the stage physically and with his guitar he dominates the band’s sound. Homme of course was also a co-founder of the Eagles of Death Metal, and played with Dave Grohl and Led Zeppelin’s John Paul Jones in the band, Them Crooked Vultures. Last year, wrote with and produced Iggy Pop for his Post Pop Depression album, and tour. 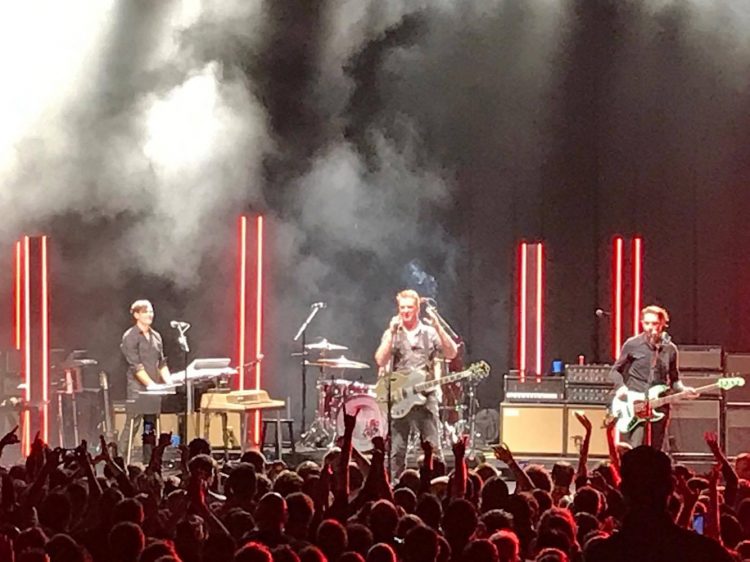 The band opened with “Go With the Flow,” a song from Songs For the Deaf, that on previous nights on the tour had been the song they used to close the set. They followed that with “Lost Art of Keeping a Secret” and “Feet Don’t Fail Me,” a song that they’d used to open on previous nights from the new album Villains. Queens’ music is characteristically hard and heavy, often structured around a bold riff that’s repeated, with Homme’s vocal and occasional guitar solos laid on top of the solid structure shaped by bassist Michael Shuman, drummer Jon Theodore, Troy Van Leeuwen on guitars, and Dan Fertita on keyboards, and on some tracks third guitarist.
Much of the rest of the band’s 18 song, 85-minute set, included songs from Villains interspersed with tracks from 2013’s …Like Clockwork, like “My God Is the Sun,” and “Smooth Sailing.” Highlights included “The Evil Has Landed,” a strong song from the latest; “Avon,” the one song from the band’s 1998 debut; “No One Knows,” which featured a brief drum solo from Theodore while Homme lit a cigarette; the goofy disco sex song, “Make It Wit You,” with Homme delivering his bluesiest guitar solo; the new “Villains of Circumstance” which was quieter and built on a strong bass line by Shuman, as Homme sang in a near falsetto; and “If I Had a Tail,” which the whole crowd appeared to know, and sang along with. They closed the set with “Little Sister.” 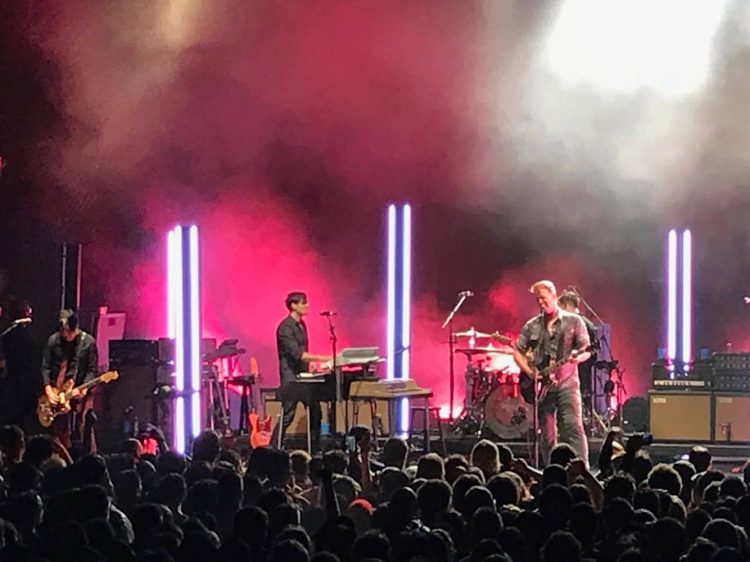 For the encore, they came back strong with the alternative radio hit (if there is such a thing), “The Way You Used to Do,” which had the entire audience singing along and imitating Homme from the music video, followed by a very heavy take on “A Song For the Dead.” But let’s be clear, Josh Homme is everything you want in a Rock God, tall, good looks, attitude with a touch of dark humor, you know the type: women want him, men want to be him. While he wants to rock and see the audience enjoy his music, he’s not a cheerleader, he’s not going to tell you to clap or sing along, if it’s important, if it’s real you’ll do it and he won’t have to ask. Or you won’t, it’s no skin off of him.
Homme had one message for the crowd, the past is gone, the tomorrow may not come, if you’re going to do something, be something, whatever, be it now. “Yeah, you want to give me the finger, go ahead and do it, but do it NOW!” Before he adds, “your finger’s too small to hurt me, anyway.” 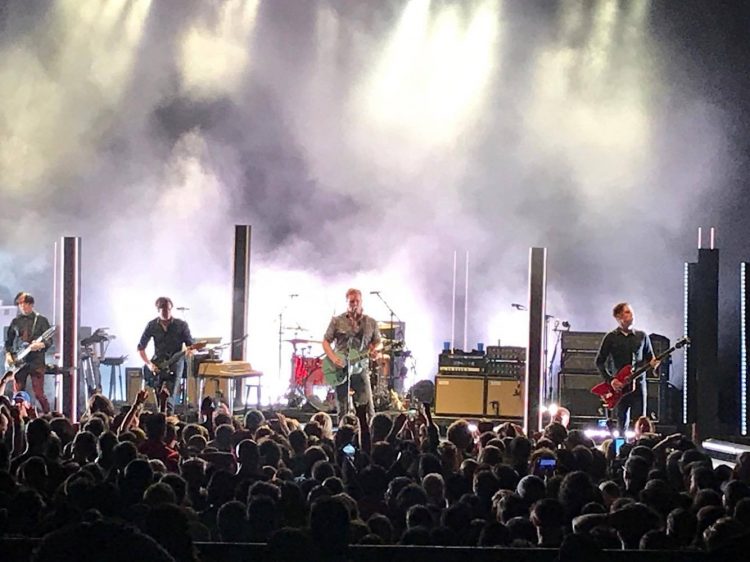 The opening band, Royal Blood is a British two-man blues metal band, where singer/bass player Mike Kerr plays a bass riff that each song hangs on, drummer Ben Thatcher does everything he can to make the rock beat interesting, and Kerr simulates guitar solos by playing the high notes on the thinner strings. For the first half of their 55-minute set, you had to marvel at their ingenuity and musicality to pull off such a big sound with only two players. But then I thought of the Black Keys and the White Stripes, and how much better that worked with a guitar player who knew what they were doing. So, for the second half, as it rained pretty solidly, I have to admit I kept wondering how much better their music would be if they were just willing to pay a decent guitarist to sit in.
-Review by Brian Q. Newcomb