Prince: Prince And The Revolution – Live 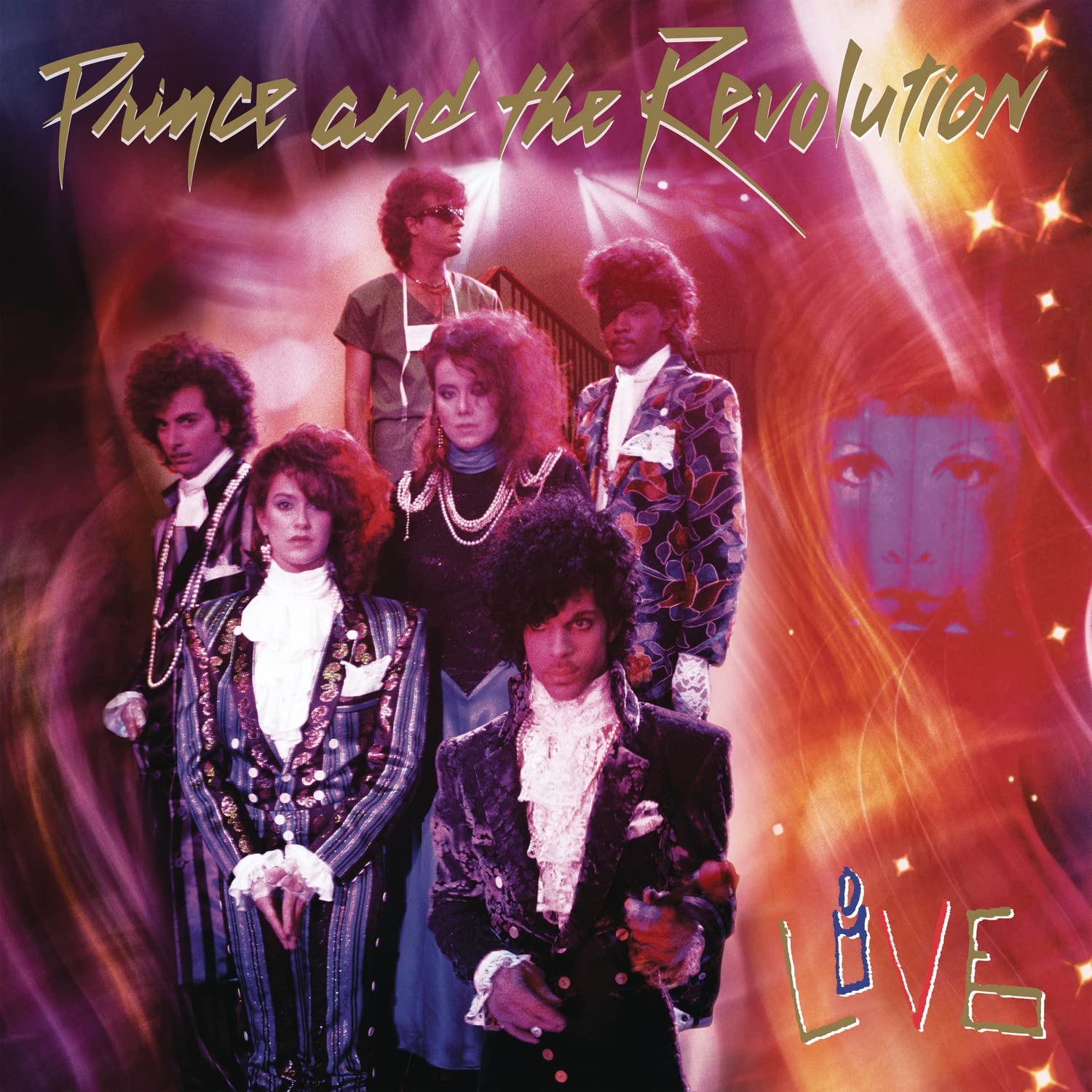 The word “genius” probably gets thrown around too loosely when referring to talented pop and rock artists. Even the most successful artists often flow in and out of fashion, often those who’ve produced a recognized “masterpiece,” suffer from the dreaded sophomore curse or move all too soon from immortality to irrelevance in this crowded media marketplace where very few have the skill, will, and capacity to survive beyond their initial 15 minutes of fame. It’s the rare multi-talented artist like Prince that seems most deserving of such high praise: someone who has written timeless hits; a multi-instrumentalist who is also recognized as one of the world’s finest rock guitarists (check out his solo during the performance of “While My Guitar Gently Weeps” at the 2004 Rock & Roll Hall of Fame induction ceremony playing with Dhani (George’s son) Harrison, Tom Petty, Jeff Lynne, and Steve Winwood, available on youtube); a tremendous singer with an amazing falsetto and vocal range; and one of the greatest live performers in rock and R&B (see his 2007 Super Bowl Half-Time show in the rain, also on youtube). Prince combined the styles and funk of James Brown in his dance moves and the spirit of George Clinton, the innovative guitar talent of Jimi Hendrix and the combined speed and fluid melodicism of Eric Clapton and Jeff Beck, and he did sexy in ways that made Tipper Gore blush, and that has to count for something. So, I’ll say it, Prince was a musical genius, and if he hadn’t died prematurely from a fentanyl overdose in 2016, I believe he’d still be filling arenas and producing music worthy of our attention and joy. As it is, if they ever settle his legal estate issue, I understand there are hours and hours of recordings enough for many fine releases of “new” music from Prince and his various bands.

All that said, near the end of Prince’s first arena tour following the huge success of his hit album and movie “Purple Rain,” the artist was eager to move on to new projects and although he could have spent another year on the road raking in record ticket sales grosses, he decided to record a movie of the concert and release the audio as a live album. Originally filmed a week before his tour ended, on March 20, 1985 in Syracuse, NY, with the VHS tape was released late, and the original recordings have languished in the vault for 30 years, with a deluxe DVD version surfacing in 2017. In June of this year, Legacy Recordings and NPG Records have gone back in and remastered the video, done some color corrections and remixing the audio in 5.1 Dolby surround sound for the Blu-Ray version, while releasing the audio live album in CD and vinyl formats. Looking at the online versions on youtube, the film looks and sounds impeccable.

But for our purposes here at The Fire Note, we’re dealing with the digital sound of the audio recordings, which is pretty phenomenal I have to say. First off, Prince’s band, The Revolution were amazingly tight having been out on the road for 5 months straight prior to the taping, and the tour, following on the heels of the movie and album, had been designed to reproduce many of the set pieces from their performances in the film each night on stage, complete with dancers, including Jerome Benton, who did his mirror shtick with Morris Day of The Time, a band the Prince wrote music for and produced. I remember seeing that show in St. Louis in the arena, late in ’84, after seeing Prince a couple years earlier in his native hometown of Minneapolis while I was up there doing grad school. The film had captured Prince’s live performances as well as those of The Time in the classic Twin Cities venue, First Avenue, and while that intimate club setting was hard to duplicate in a large sports arena with often less than great sound, Prince & Co. had designed the show to recreate that spirit from the film as much as it was possible, right down to Prince doing a bathtub scene.

But of course, what matters here most is the music, the performances, and the sound, and Prince and The Revolution: Live does capture the live energy of that concert very well. For the person listening at home, the one deficit is that on numerous occasions there are periods where the band is playing and the repeat the same music phrase for a lot longer than on the original recordings, often at the beginning of a song, either to allow for costume changes or on-stage dances or physical performances that would make sense to movie viewers, but feel a tad redundant if you’re just listening along. But that said, the show was full of great songs, and killer performances. Prince opens the concert with the same intro to the album, the “Dearly Beloved…” intro to “Let’s Go Crazy.” Then leads his fine 6-piece band through 3 songs from his previous album, “1999:” “Delirious,” the title track, and “Little Red Corvette.” While Dez Dickerson was the second guitarist on the studio album, and played that role in the film, he’d left the band to pursue solo endeavors and been replaced by Wendy Melvoin on guitar, recommended by her friend on keyboards Lisa Coleman. Dr. Fink outfitted often in scrubs, also played keyboards, and the killer rhythm section was Brown Mark on bass, and Bobby Z. on drums.

They returned to Purple Rain, for “Take Me with U,” which gets the crowd to sing back the title on the chorus. Then “Yankee Doodle” is a keyboard solo riff on the familiar melody, which functions as an interlude, that leads into the spoken word intro to “Do Me, Baby,” the one song that comes from Prince’s 1981 release, Controversy. The fast-talking, fun dance riff of “Irresistible Bitch,” which is just a couple minutes long, followed by “Possessed,” which is a strong funky number with some fun stop/start action that wouldn’t surface until a deluxe version of Purple Rain was released. This live version features a smoking sax solo from Eric Leeds. Next up was a B-side release, “How Come U Don’t Call Me Anymore,” which finds Prince teaching the crowd his high falsetto part, before diving into the A-side single, “Let’s Pretend We’re Married,” again with a sax solo, and a jazzy solo from Melvoin, “International Lover” is shrunk down to a minute or so, before Prince gets busy confessing to “God,” and I think this is where the bath tub came in. “Computer Blue” was a bit of new wave pop/funk, followed by the dangerously sexy “Darling Nikki” and “The Beautiful Ones,” with the backward taped intro, and Prince’s brief nod to “Jesus.” Finally, the played the set closing “When Doves Cry.”

The first encore featured “I Would Die 4 U,” and then a large extended jam on “Baby I’m a Star,” which included the show’s opening act Sheila E. who takes a percussion solo, members of the female trio Apollonia 6 doing backing vocals, and another fine sax solo from Eric Leeds. Finally, Prince and The Revolution deliver the title track of “Purple Rain,” the movie’s climax number, giving it an 18-minute version that never feels too long or over-burdened, with Prince doing numerous guitar solos, playing two of his guitars from the movie. Arriving at this late date, this concert movie and live album is a lovely reminder of a very special time to be a music fan, and a testament to those who missed it. Prince was at the top of his game, and this concert film and album captured his band in all their classic moves, in a concert setting that should be shared with future generations. A tribute to this amazingly gifted musician who had the ability to move a massive crowd with his songs, and that impressive guitar ability now fully displayed for all time.