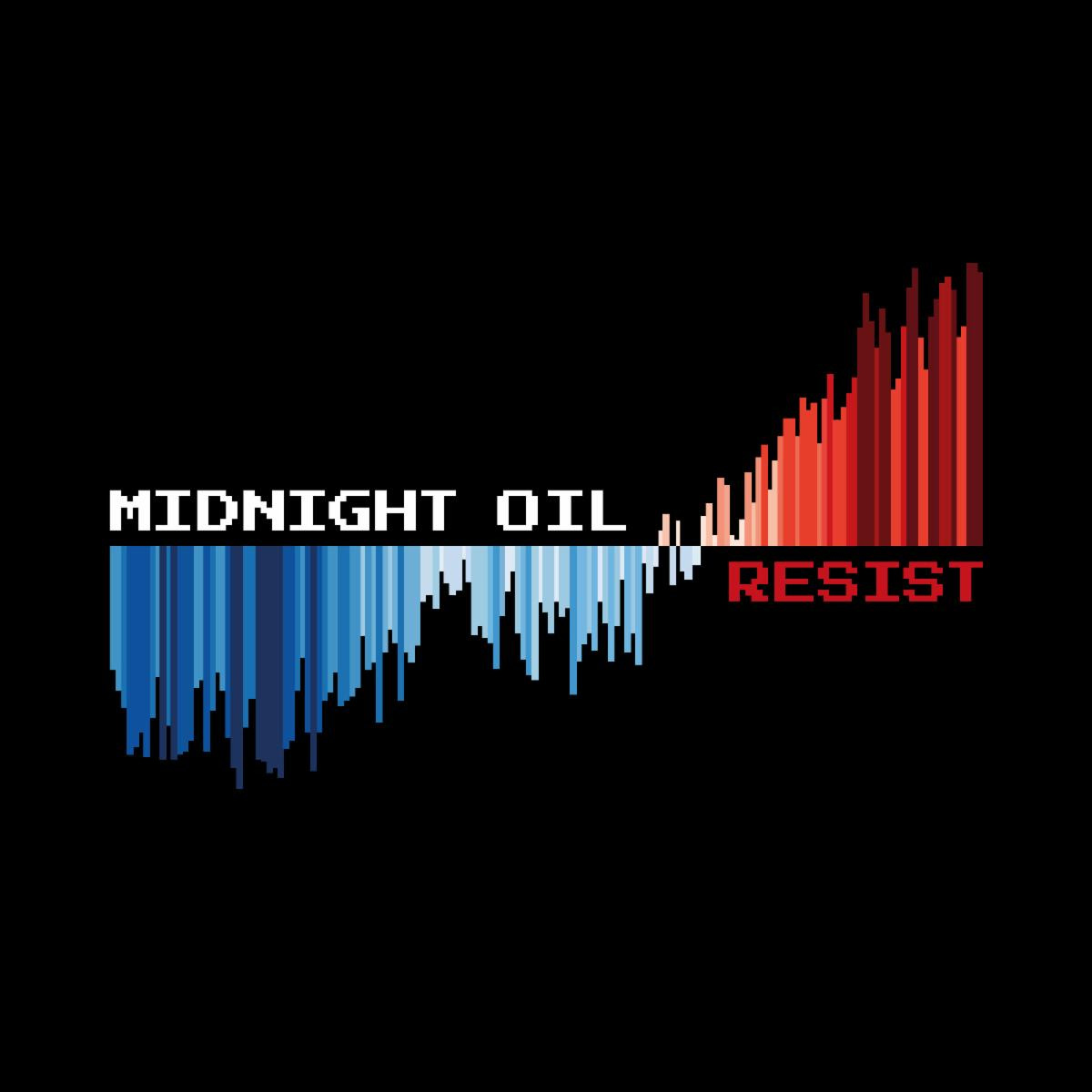 The standing joke among those of us old enough to remember is that the opening months of 2022 feel a lot like the 80’s, with new music from Elvis Costello, Tears for Fears, and now Australia’s gift to the alternative rock world, Midnight Oil. When the band returned after a long hiatus in 2017 to play an intimate pub gig in Sidney’s legendary Selina’s, vocalist Peter Garrett borrowed some lines from Dylan Thomas’ poem, inciting the sweaty crowd to “rage, rage, against the dying of the light.” Once the band finished their “Great Circle World Tour” that year, they returned to the recording studio for the first time in 18 years and the release of Capricornia in ’02. The first 7 tracks were collaborations with Indigenous Native and Aboriginal artists, which was released as The Makarrata Project in October 2020. The remaining 12 tracks make up Resist, the band’s 13th studio album, where they do in fact continue to rage.

Just like their biggest hits, “Beds Are Burning” in ’87 and “Blue Sky Mine” in ’90, Midnight Oil’s vision remains focused on the climate crisis and the issues of justice and fairness for the Indigenous peoples of our planet. “Rising Seas” opens the album with a meditative acknowledgement that the older generation has let the children who follow us down, Peter Garrett singing in his sweetest voice over an organ bed, that “we have to look you in the eye and say we sold you cheap… we did not act with serious urgency.” Then guitarist Jim Moginie kicks the track into high gear along with bassist Bones Hillman’s driving groove and the Oils are off and running, doing what they have always done best: rocking hard and steady, while ranting about “temperature rising/climate denying… nobody’s listening… we’re all refugees… open up the floodgates/to the rising seas.” And they carry that pub rock intensity into the next track, “The Brake” and on through to the end of the album.

Sadly though, on the same weekend that The Makarrata Project hit number one in Australia, Hillman died from cancer. Whether it is the loss of their bass player, who joined the band in ’87, or the fact that Garrett will be 69 when they hit the road this summer, Midnight Oil has announced that this will be their final tour. Moginie has suggested that “We’ve played intensely physical gigs since our humble beginnings in 1977 and we never want to take even the slightest risk of compromising that.” Well, given the sonic and social commentary punch of this new material, they offer every reason to believe they’re going to be leaving the stage in strong form.

As I mentioned, “The Brake-Darling River” begins with another brutal rock riff that reveals the Oil’s punk leanings, with Garrett spitting out the condemnation of “the Founding Fathers… There’s a fatal flaw/There’s a rule of law, written by the cotton masters,” aimed at the Aussie leaders to be sure, but applies equally to America’s own double standard and original sin. But the second half of this nearly 7-minute track, is a beautiful piano ballad, the lyrics focused on the misuse of the Brake-Darling River system are never as gentle as the melody, asking “Who left the bag of idiots open?” And asking to “shake some truth out of the jar,” because water needed to sustain First Nations’ people gets siphoned away for wealthy cotton growers.

“Tarkine” follows, a pop/rock track with a simple expressive guitar line, and a lyric that speaks of love for an Aborignal tribe that dwells in the rainforest at risk. The song includes a haunting violin by Evelyn Finnerty, echoing the commercial interests that threaten to leave a souvenir of the once great trees. “At the Time of Writing” confronts the failure to stem the tide of climate change in another punchy pop hook, while “Nobody’s Child” taps a bit of The Who’s synth-y prog rock moves while celebrating the Oil’s perpetual values of “Beauty, love, and compassion,” with smart guitars by Moginie and an impassioned vocal from Garrett. Following the environmental theme and the awareness that even if humanity were to wake up from our dream, we’d be “staring at screens” and likely still “choose apathy,” even though “every creature drinks from the same cup.” If we don’t make better choices, these songs suggest, it’s not going to end well.

“Reef” brings some bright acoustic guitar chording front and center, before the rhythm section kicks it up a notch, an up-tempo sounding anthem with a darker lyrical plot line: “Welcome to tomorrowland/Environmental injury/Trashing our ecology/So simply valedictory/coral reefs are history.” Since “The sky is a mirror of self-interest and greed,” our only hope is to “Vote them in and vote them out/Consign them to purgatory.” In “We Resist,” a floating pop number with one of Garrett’s sweetest sounding vocals, the remind those still listening that the only time we’ve ever seen meaningful change for the common good is when humanity organized resistance, whether it was “Free market and labor rights/Women’s vote and hunger strikes.” As the piano, strings and a dark cello cry out, “Please don’t say that nobody cares/Standing up to those who sell fear/With a polite insistence to hear.”

“Lost at Sea” is another pop song, like most things here written by Moginie, with a second lead vocal running alongside that of Garrett from co-writer and drummer Rob Hirst. It addresses their country’s failure to show compassion to refugees, treated shabbily by a military filled with “the sons of White Australia.” “Undercover,” written by Garrett, is another pop rock track about the way we’re left “pretending that everything is okay.” “We Are Not Afraid,” with Moginie bringing a smart nylon-stringed acoustic guitar touch before a lush string section and a brooding cello by Julian Thompson elevate the track musically, while the lyric speaks of overcoming fear: “The rights of those that follow and the living things that feed us/Are greater than the principles of those that lead us/We must be fearless, we must be fearless.” The disc closes with a final track that asks “Where is the soul, the substance and the whole/When you’re living on the last frontier every day,” another crisp, jaunty pop/rocker, with a heavy guitar hook underpinning and a strong melodic synth solo and sing-along chorus.

While there’s an underlying sense of somber resolve about the unsolved problems of our world and the cultural complacency and failure to rise up and do what needs to be done to bridge the gaps in our social contract, Midnight Oil is a band that looks directly into the abyss and chooses to rock out rather than succumb. That strong, compelling resolve to express resistance takes many musical shapes throughout this thoughtful band effort, somehow avoiding being redundant. For 45 years they have held a bold vision of life’s hard truths about political hypocrisies, longstanding injustices, and the looming ecological crises, and yet consistently turned their angst and open-hearted worries into serviceable, unrelenting rock & roll music. Resist arrives as they prepare for their final world tour, a strong statement of musical and intellectual vigor, worthy of their best work of the past. They remain unbowed, and rage on.

Key Tracks: “Rising Seas” / “At The Time Of Writing” / “The Barka-Darling River”

Artists With Similar Fire: The Tragically Hip / U2 / The Who