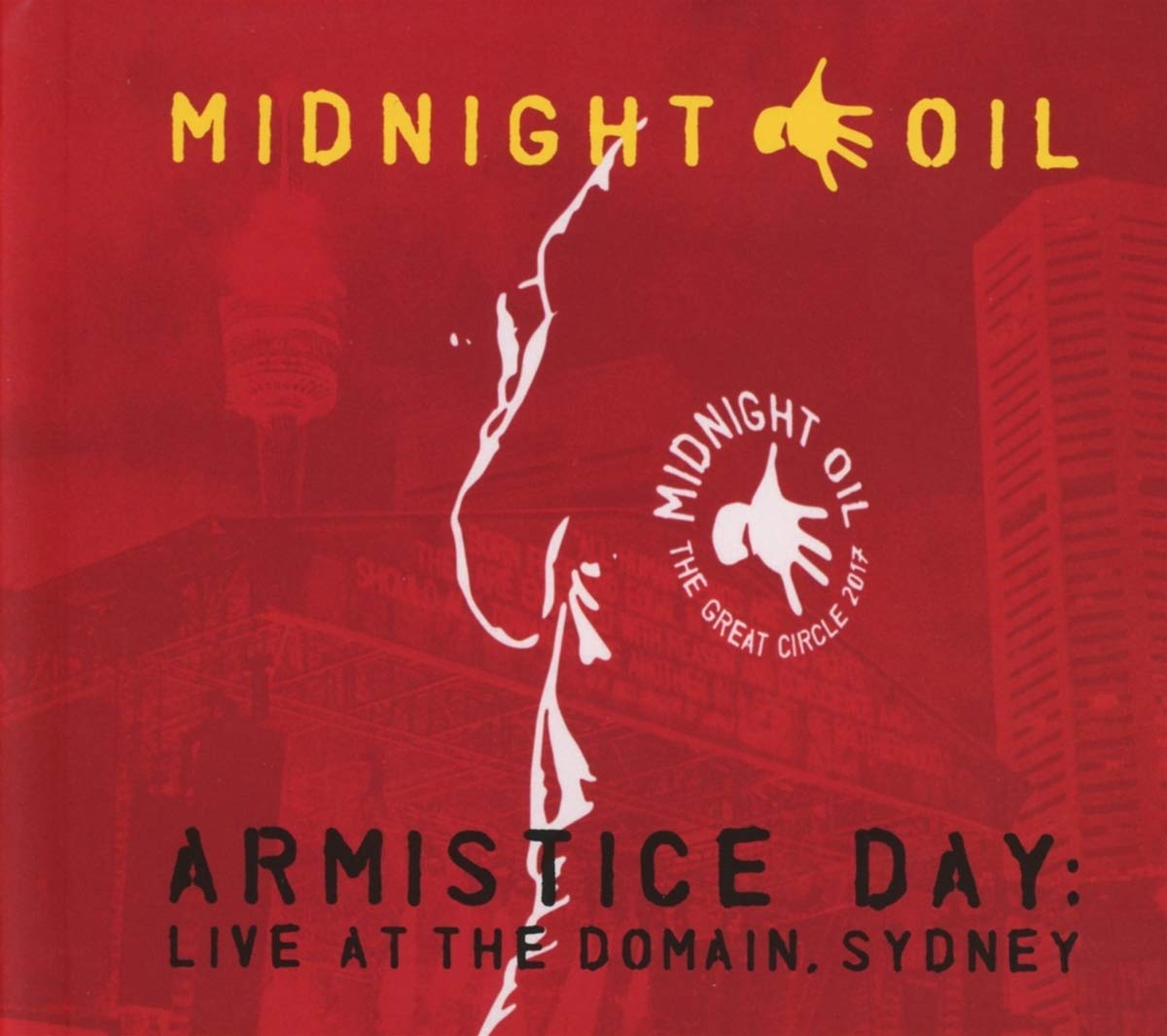 Fire Note Says: The “Power And the Passion” lives on with this new burning live set from Midnight Oil.
Album Review: One of the best bits of news early in 2017, was that Midnight Oil had reformed, and was planning a global tour, including 13 dates in the U.S. Although, Australia’s Midnight Oil had made a strong impression on alternative music fans in North America in the early 80’s with albums like 10, 9, 8, 7, 6, 5, 4, 3, 2, 1 and Red Sails in the Sunset, their commercial breakthrough didn’t come until 1987 and the release of Diesel and Dust, with it’s AOR hit song, “Beds Are Burning.” It’s unusual for a strongly political song to do so well on U.S. charts, even more so one about the abuse of aboriginal land rights in the Australian outback, but the song’s high energy guitars, undeniable beat, and sing-along chorus became a global anthem. The Oil’s led by singer Peter Garrett was often outspoken on other political issues, especially around the environment, and the band went on to further success around the world until coming to an end in 2002, when he decided to run for political office in Australia’s federal government, where he served in several roles including Minister for the Environment, Heritage and the Arts. So the announcement that the band would play 77 concerts on The Great Circle World Tour, playing on 6 of earth’s 7 continents was big news.
Thankfully, after 14 dormant years, someone thought that they should film and record one of the tour’s final dates, not just for posterity but also for those of us fans who were unable to get to city they were playing (speaking personally). Armistice Day: Live At The Domain, Sydney, was filmed for release both on DVD and Blu-Ray, and there’s an audio version, a 26 two-CD set (from which this review was written). One thing needs to be said right up front: this does not sound like a band of elder statesmen who once played in a rock & roll band, but took 14 years off to pursue other interests, and just got back together for a nostalgia tour, and to make some extra cash to cover their retirement. No, far from it. Midnight Oil in 2018 sounds just as potent, energetic and relevant as they did when I caught them on tour a couple times in the late 80’s. If anything, drummer Rob Hirst and guitarists Jim Moginie and Martin Rotsey are attacking these songs with brutal force for a hometown Sydney crowd, as if to prove the point that this has always been a band that embodied the spirit of one of their best songs, “Power And The Passion.”
And given the long time off, it’s important to point out that this is pretty much the original 5-piece band, with the addition of bass player Bones Hillman, who came on board in 1987, and an additional backing musician, Jack Howard of the band Hunters & Collectors, who added keyboards, trumpet and flugelhorn, and didgeridoo on tour and for this show brought along the H&C horn section for tracks like “Power And The Passion.” That last one is the long, wooden “drone pipe,” a traditional instrument of the Aboriginal people of Australia, comes in handing on songs like “Treaty,” where the Oils are joined by guest vocalist Yirrmal, an indigenous Australian artist.
Recorded on Armistice Day, November 11, 2017, and released a full year later, appropriately opens with the Midnight Oil song of the same name, the global celebration for the end of War to End All Wars, WWI, which is celebrated in the U.S. as Veterans’ Day. All the bands hits are here, as you’d expect, “Beds Are Burning,” “The Dead Heart,” and “Dreamworld” from “Diesel and Dust,” the title track from that album’s follow-up, “Blue Skiy Mine,” and it’s other singles, “Forgotten Years” and “King of the Mountain,” and a few other songs that got airplay outside of their homeland, like “Truganini,” “Redneck Wonderland,” and “Golden Age.”
But, of course, like most bands, Midnight Oil is most-loved and most successful in their native Australia, where fans are far more familiar with their complete 11 studio album catalog, so lots of the songs, lesser known here, got a great response from the hometown crowd, singing along with Garrett on “Power and the Passion,” “King of the Mountain,” “Ships of Freedom” and “U.S. Forces,” which of course is a song protesting U.S. policies, the CIA and “bombs and threats.” In many ways, the social justice themes of Midnight Oil’s music is captured in the lyrics of “Warakurna,” which state that “there is enough for everyone,” and an acknowledgement that the very land that they live on really belongs to the indigenous people who were there before the Europeans arrived, which is true in many places of the colonized world. While there’s no spoken commentary on the audio, no doubt one factor bringing Midnight Oil back at this time in the world’s devolution, is to speak out about concern over climate change, and the growing influence of nationalism, in that sense this band’s music is as timely and important as ever.
But finally, like any other rock band, it’s the music that matters, and Midnight Oil delivers. Much of the time this band rocks, and rocks hard, as heard in the brutal riffage of “Redneck Wonderland,” the torrential bass line of “Stand In Line,” the dominating combination of Hirst’s driving snare beat, and the interwoven guitars of Rotsey and Moginie, but they keep things interesting throughout with artful additions like Garrett’s harmonica on “Blue Sky Mine” and “Truganini,” “Kosciuszko,” which starts off like an acoustic folk song but then is taken over by drums, or the lengthy piano break in “Short Memory.” In 2017, Midnight Oil was as vital as ever, and they’ve announced more tour dates for summer of 2019, evidently that “Power And the Passion” lives on.
Key Tracks: “Beds Are Burning” / “Blue Sky Mine” / “Power And The Passion”
Artists With Similar Fire: U2 / The Tragically Hip / INXS
Midnight Oil Website
Midnight Oil Facebook
Sony Music
– Reviewed by Brian Q. Newcomb