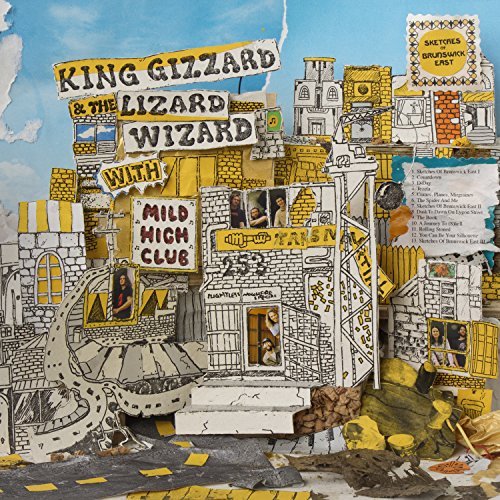 Who: Ever since our first review of 2014’s I’m In Your Mind Fuzz, The Fire Note has been big fans. Psychedelic Aussies King Gizzard and the Lizard Wizard is an expansive band that doesn’t shy away from musical challenge and experimentation.

Sound: King Gizzard has so many forms of expression from the spaghetti western album Eyes Like The Sky (2013) to Nonagon Infinity (2016) which plays like a tribute to Rush, Hawkwind, and Deep Purple. They’ve even recorded an album in microtonal tuning, 2017’s Flying Microtonal Banana. That seems to barley scrape that surface.

TFN Final Take: King Gizzard and the Lizard Wizard are indeed mad men that are slowly taking over the world. A promise was issued at the beginning of the year that said the band would record and release 5 albums by the end of 2017. Having released Flying Microtonal Banana in February and then Murder of the Universe in June, we now have the third album. Sketches of Brunswick East which is a jazz album in collaboration with Alexander Brettin, founder of the band Mild High Club. To pinpoint its closest relation, Sketches of Brunswick East plays loose like the flow of 2015’s Quarters with the airy whimsy of Paper Mâché Dream Balloon (2015) with a touch of muzak and Vince Guaraldi trio. Now that muzak relation isn’t a jab, but I feel it really helps describe what you might be getting into. “Sketches Of Brunswick East II” highlight the docile meander of Stu’s Flute along with swimmy keys and xylophones. Some of my favorite tracks include “Rolling Stoned,” “The Spider And Me,” and “You Can Be Your Silhouette’ and that’s because of the ease of listen. This is a chill album that paces oddly, an album that might turn off newly found Gizz fans. But, for those who have been on the ride for a while now, this is Gizz with Alexander Brettin experimenting and that’s not a bad thing.