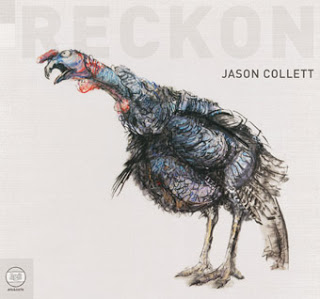 Fire Note Says: Reckon is a dark and angry record, wrapped in a pretty folk package.
Album Review: Reckon, the 6th solo lp from Broken Social Scene’s Jason Collett, is a protest album, but you might not get that from it on first listen, because Collett has such a gift for melody that it sounds too pretty to be protesting anything. By the third listen, it becomes pretty obvious, that this is in fact social commentary, and Collett is none too happy about the current state of economic affairs in his native Canada.
Sonically, at its best moments, Reckon conjures up the spirit of Townes Van Zandt. It’s a laid back folky affair, with some tasteful strings thrown in for good measure.  “Jasper John’s Flag” was the first song to really catch my ear. Much like the famous painting for which the song takes its name, there is more to this song, and more importantly to Reckon as a whole, than what is on the surface. Underneath the surface is where the statement lies. The real life Johns painted his famous American Flag overtop a collection of news stories and photos which were barely visible under the paint, they added to the mystery of the painting. What was he trying to say? What was just underneath the surface? That is where the true art lies. Collett is doing the same thing on Reckon, there is an anger and a general distaste for the direction things are headed in, but it simmers just below the surface, you can almost hear what it is exactly he is saying, but then it’s gone. It’s there but you can’t quite grasp it. That’s the art; it’s open to different interpretations by different listeners.
Collett is seldom as honest about his distaste as he is on “I Wanna Rob a Bank”. Written from the point of view of someone who has absolutely nowhere else to turn, it’s a catchy song with a dark message. Elsewhere, on “Don’t Let The Truth Get to You”, he explores the differences in social class and the exploitation of the working class by all facets of society.
Reckon is a multi-faceted record, operating on multiple levels at once. It’s a dark haunting record, wrapped in a pretty folk package.  The only real problem I had with this record, and one that kept it down a notch, is the fact that it the record loses a little of its potency due to it all starting to sound the same after awhile. For it to be truly effective, the record has to be engaging enough to really draw you in. I was easily distracted from it, which was unfortunate, because I was hoping to become completely absorbed.
Key Tracks: “Jasper John’s Flag” / “I Wanna Rob a Bank” / “When The War Came Home”
Artists With Similar Fire: Townes Van Zandt / Steve Earle / Ryan Adams
Jason Collett Website
Jason Collett Facebook
Arts & Crafts Records
-Reviewed by Kevin Poindexter

We Are The Physics: Your Friend, The Atom [Album Review]