Hurray For The Riff Raff: Life On Earth [Album Review] 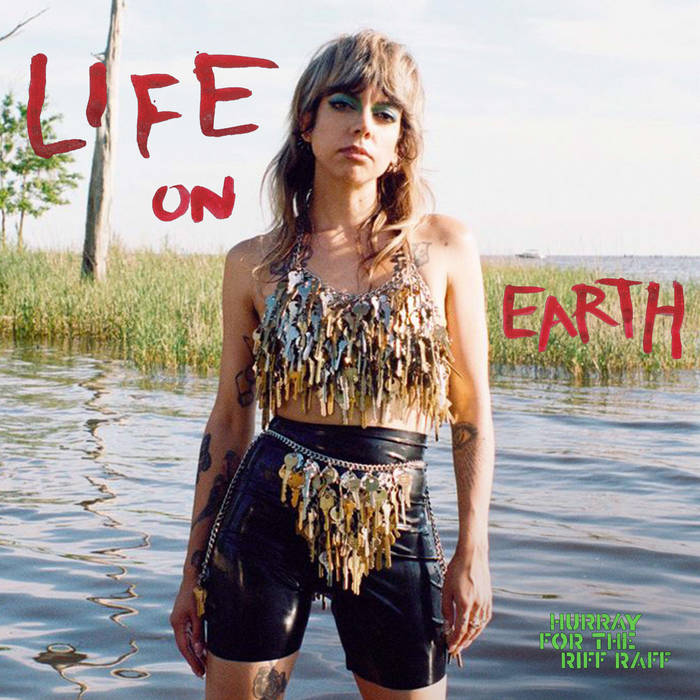 Hurray For The Riff Raff
Life On Earth
Nonesuch Records [2022]

While this is Hurray for the Riff Raff’s is its debut on the Nonesuch label, it’s the 7th studio album from singer/songwriter Alynda Segarra, who currently dwells in New Orleans and also fronted the “hobo band” Dead Man Street Orchestra. My first encounter Hurray was an all female triple bill four years back at The Warsaw, a large hall in Brooklyn that served polish sausages out of a window. The main draw was Waxahatchie, who played second, the folk act Bedouine opened the evening, but Hurray for the Riff Raff seemed to really bring this big funky, flowing folk rock party to the stage and everyone was invited to dance along, even if you were hearing the songs for the first time; they felt warm, accessible and familiar.

Segarra’s last album, 2017’s The Navigator gave Segarra a chance to explore their Puerto Rican heritage, but here Hurray for the Riff Raff weds a variety of folk music approaches that encompass a spectrum of street sounds that they lump together in a unique category as “nature punk.” But the overall vibe is a danceable street party folk rock from the jangly rock guitar feel of “Pointed at the Sun,” to the acoustic punk rhythm of “Rhododendron,” or the tasty hip hop groove of “Precious Cargo,” with Segarra rapping the fun poetic lyrics. The Hurray for the Riff Raff motif finds Segarra locking in on basic musical hook or rhythm, while the lyrics tend to embrace a earth friendly gathering of the human community, whether it’s a song about suffering for love, putting one’s faith in the gospel of vegetation, or telling the story of an immigrant’s travels, there’s a sense of longing, hope, and catharsis in most every track.

In the pristine modern pop meets new wave vibe of “Pierced Arrows,” Segarra looks at life’s tragedies but insists “that’s no way to die.” But that positivity is hard won, as there are “Wolves” so it’s “not safe at home anymore/you gotta run, babe, you know how to run.” In “Saga,” they decide their not going let a sexual assault become story of their life, so even though “nobody believed me,” they decide they are going to “make it through this week/and I’ll get out alive,” while the music drives forward with an insistent groove rooted in those warm NOLA horns. They return again at the end of the gentle meditative hymn that is the title track, with the reassuring confidence that “life on earth is long,” as if to make a funereal sound breathe with the possibility that only a Dixieland clarinet and bring home. At its best, pop music has engaged that strange alchemy that takes a sad song and makes it better, and Hurray for the Riff Raff taps a rich vein that tells the hard truths in a way that they land softly. Perhaps that’s the gift of the Buddhist wind chimes that toll out for a minute in the closing track, “Kin.”