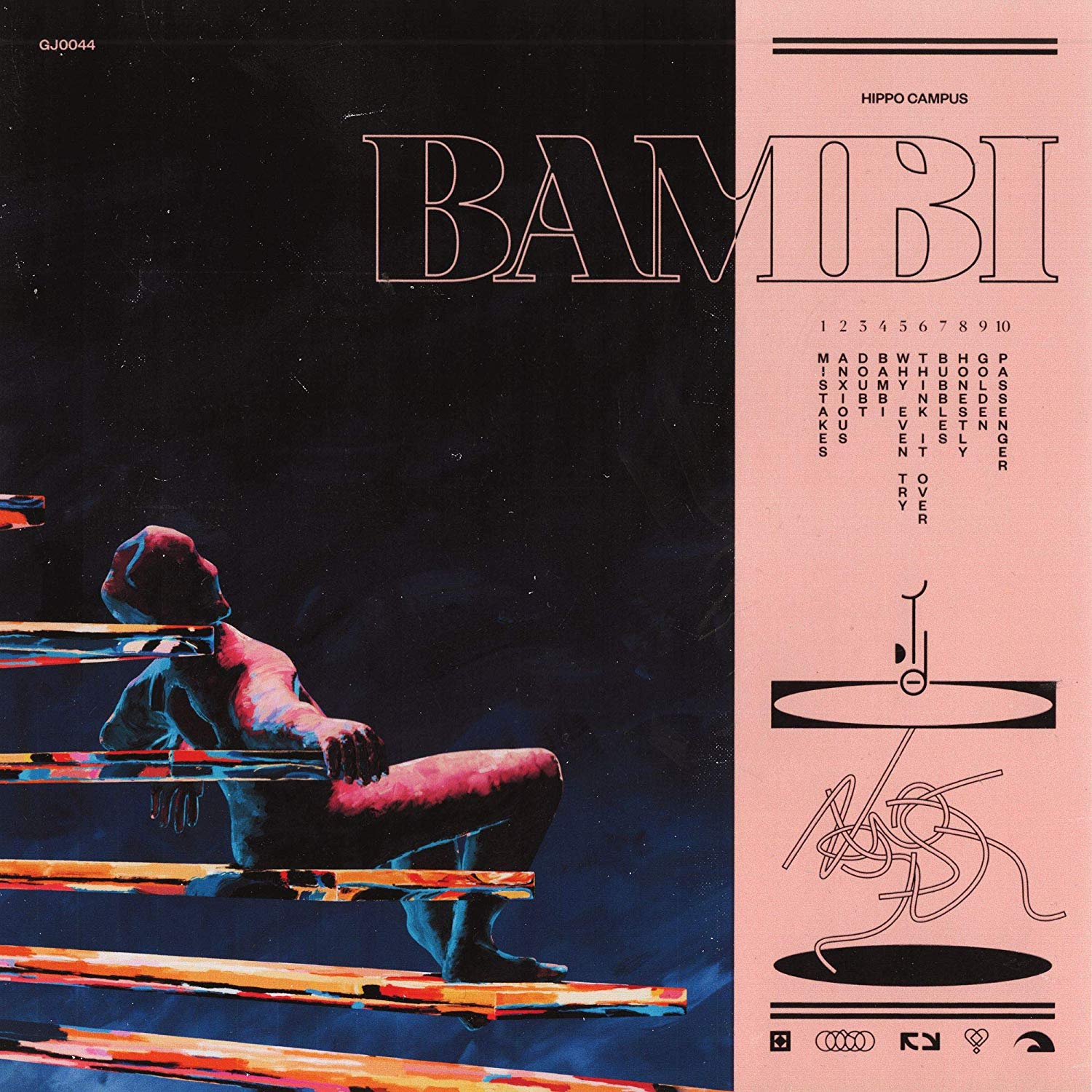 Fire Note Says: Hippo Campus’s sophomore LP is a stunning achievement.
Album Review: St. Paul’s Hippo Campus has emerged over the past few years on the strength of several singles and EP’s. Bambi is their second LP, and it is a revelation. Hippo Campus takes their base sound, which has a loose, funky/groovy feel, and layers so many new elements to it that it sounds like a new band. Almost. The band’s DNA is what weaves together an experimental, genre-defying collection of tunes.
When you start your rock album with what essentially amounts to a hymn, you’re swinging for the fences. It was disorienting when diving into Bambi the first time; this is not the campus jam band you’re expecting. Immediately following that ambitious opener is “Anxious,” with languid, cool vocals and lots of bleeps and bloops. It takes its times to build; you’re five minutes into the album, one and a half songs in, when a swelling chorus awards your patience. “Anxious” sounds like it would fit right on a Perfume Genius album, with its lovely restraint being broken to take the song to new heights.
Hippo Campus uses the same trick on the first song that sounds familiar, “Doubt.” It is a groovy, fun rocker with Jake Luppen’s lead vocals punctuating every beat. Synthesizer is surprisingly used effectively throughout Bambi, with “Doubt” showcasing that point. A huge chorus that will stick with you for days is another wonderful surprise. It is full of harmony and spirit. “Doubt” is the song that elevates Hippo Campus’s previous sound to a new level, laying the groundwork for the rest of the album to keep experimenting and evolving.
Then there’s the title track, “Why Even Try,” and “Golden.” “Golden” is a hidden gem on the album’s strong, yet not as lustrous, side B. It may take a few listens, but eventually its hooks will do their job and have you coming back for more. “Why Even Try” is my favorite Death Cab For Cutie song in years. “Bambi” is a cool slow jam that benefits from perfect album sequencing.
Bambi is brimming with stone cold classics that showcase a band hitting its creative stride. Whether or not Hippo Campus can carry this momentum with them is an exciting question to ask, but what is more important is that we have a fun, accessible album on our hands now. Miss is at your own risk.
Key Tracks: “Anxious” / “Golden” / “Why Even Try”
Artists With Similar Fire: Saint Motel / Young the Giant / Alvvays
Hippo Campus Website
Hippo Campus Facebook
Grand Jury Music
– Reviewed by Matthew Heiner