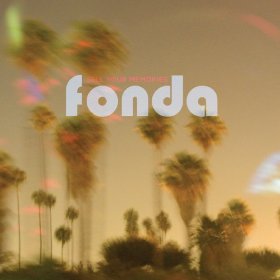 Fire Note Says: Fonda pretend like they never left the scene with their excellent return Sell Your Memories!
Album Review: The core members of Fonda, Emily Cook and David Klotz, emerged back on the indie scene two years ago with the Better Days EP which ended their absence of new material since the band’s third album, Catching Up To The Future was released back in 2003. That makes Sell Your Memories even more special as it has now been ten years since we last heard a full length from the dream pop shoegaze band Fonda.
Sell Your Memories does not disappoint as it is a solid recharge to a career that I honestly thought had slid away over the years as it brings plenty of riffing 90’s guitar and an abundance of sugary hooks. Opening track “Seeing Stars” puts to rest the question if Fonda will return in a different state as the track begins with a wall of guitar reverb as Klotz’s Dean Wareham (Luna) like vocals succeed in just rising above the noise. The next super peppy track, “You’ve Got A Life Of Your Own”, is another revved pop guitar number that gets your blood going and highlights that this is exactly the Fonda that you left in 2003.

It doesn’t take long for Cook to take over lead vocals as the swaying mid-tempo rocker “You And I” features her much softer textured voice that also changes things up because of her higher range. The top end of her vocals here just pierces the guitar in this track and makes for a very engaging listen. Her voice also has a calming factor that can make the more traditionally styled duet “She Is Real” become a quick album highlight.
The best track on the album though is the closing “Let The Sunlight Lead Us Home” which also is the album’s longest at over 5 minutes. It is a track that utilizes all of Fonda’s talents as it slowly builds from an acoustic beginning with Klotz’s vocals before handing off to Cook for a line. It is here that the singers unite on the chorus and the reverb base starts to come forward. Next the song just goes upwards and outwards as horns join the mix, spiraling guitar work peaks its head out and a wall of sound explodes before the track fades away. This is the kind of arrangement that shoegaze and indie fans alike love in a track as Fonda provides a perfect slice of what they do best here as they end Sell Your Memories on a high note!
If you were ever into past 90’s bands like Luna, Lush, Ride or Velocity Girl I think Fonda is a no brainer to check out (or for some revisit) as Sell Your Memories rekindles the energy from that era and sounds completely modern. This record is not only good on the first listen but is also a grower that keeps getting better. Will some people pass over Fonda because of their time away from the scene – absolutely – should you pass it over – absolutely not!
Key Tracks: “Seeing Stars”, “Let The Sunlight Lead Us Home”, “Summer’s Gone”
Artists With Similar Fire: Velocity Girl / The Dandy Warhols / Luna
Fonda Website
Fonda Facebook
Minty Fresh Records
-Reviewed by Christopher Anthony