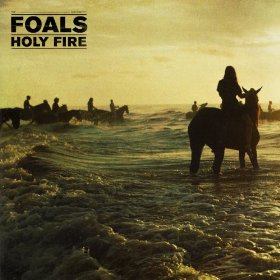 Fire Note Says: Foals are on the verge of breaking big with Holy Fire!
Album Review: Foals come out of the gate on their third album, Holy Fire, like an unholy alliance of Muse, Franz Ferdinand and Bloc Party. This is huge music with gigantic stadium sized hooks, and enough of a driving pulse to get 50,000 booty’s shaking in unison. Like their breakthrough second lp, Total Life Forever, Holy Fire isn’t a great record, but it’s a very good record. It drags in spots, and is a bit samey, but the highs are so incredible that I am willing to overlook the flaws. This is a record that needs to be experienced as loud as possible, and it’s guaranteed to lift your spirits.
“Prelude” is an interesting opener. It’s a mostly instrumental number that is full of dynamic tension and release. The guitars shimmer and spiral upwards. As the tension builds, all of the music drops away with the exception of the guitars, and all you are left with is the spacey guitars, before the drums come thundering back in. It’s an impressive enough display on record, and I’m positive that it will be devastating live. “Prelude” leads directly into “Inhaler”, a track that couldn’t be more different, it has a spikey dance groove that continues to add layers of guitars until the tension becomes intense, at that point the band drops it back down a notch, creating the feeling of the floor completely dropping out from under you, before building it back up again. Foals employ that effect throughout Holy Fire, and it never gets old. “My Number” is hands down the catchiest song on the record, if this song doesn’t catch on at some point and become a hit, I don’t know what will. It’s a cool dance rock number that immediately reminded me of that first awesome Bloc Party record, Silent Alarm. 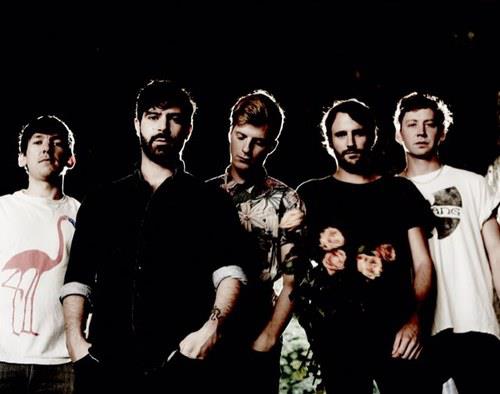 Holy Fire continues in this dance groove until we hit the last 4 songs on the record. Beginning with “Milk & Black Spiders” things begin to take a more ominous and introspective turn. The grooves are still there, but they are darker and more isolated, sounding as though they are designed to be the comedown after the intense highs of the first half of the record. “Providence” while more upbeat than its immediate predecessor is every bit as dark. This track is no fist pumper by any means, instead it’s a look at the darker side of the party, things have spiraled out of control and it’s a struggle to regain that control, the animal urges have completely taken over. By the time we hit the finale, “Moon”, the dance party has ended, and all we have left is introspection. “Moon” is a devastating haunting spacey jam. The party is over and it’s time to go, the Holy Fire has been extinguished until the next night, when you can start it all over again.
Key Tracks: “Inhaler”, “Moon”, “My Number”
Artists With Similar Fire: Bloc Party / Muse / Franz Ferdinand
Foals Website
Foals Facebook
Warner Bros. Records
-Reviewed by Kevin Poindexter

Billy Bragg Returns With New Video – “No One Knows Nothing Anymore”