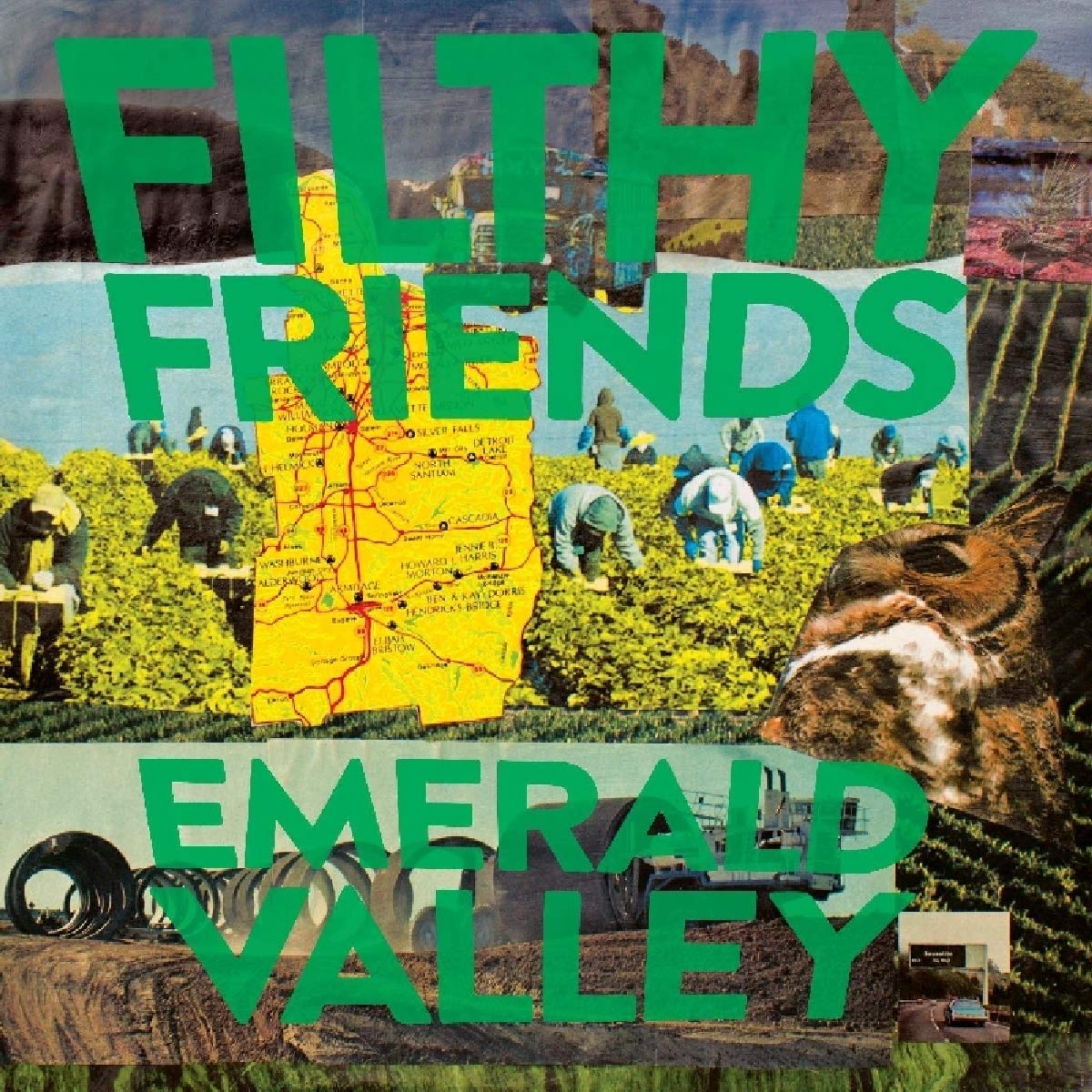 Fire Note Says: Sleater-Kinney vocalist Corin Tucker and R.E.M.’s Peter Buck take Filthy Friends out for a fun second round that takes on the President, the environment and other matters of substance.
Album Review: Filthy Friends, the alternative rock super-group of sorts, featuring R.E.M. guitarist Peter Buck and singer Corin Tucker of Sleater-Kinney, have returned with a second offering, following up on their strong 2017 debut, Invitation. This is especially good news, as it comes with word that bass player Scott McCaughey has fully recovered from the stroke that curtailed the band’s touring in late 2017. McCaughey, of course played with Buck in the touring version of R.E.M. and in The Minus 5, which also included Filthy Friends rhythm guitarist Kurt Bloch and original drummer Bill Rieflin. After recording the first album, Rieflin was replaced for the tour by Linda Pitman, who fills out the line-up on Emerald Valley.
Filthy Friends came together for fun at first, performing Bowie covers for a benefit, but reported writing their first song, “Any Kind of Crowd,” as a protest in response to Trump winning the presidency. The band’s first single here, “November Man,” takes him on directly: “Long skinny tie, hair of gold/You made your deal, our future sold,” before mourning, “We don’t have no words/we don’t have no songs/we don’t have no music/we don’t have no love/for November man,” given his apparent willingness to bow to Russia, calling him a “Moscow mule.” It’s an angry punk rant with potent music to support Tucker’s incisive vocal, edgy rock, with lots of growling, slide guitar.
The album’s opening title is a bluesy anthem that bemoans the way we have allowed capitalism to over use and eat away at our natural resources, while those who work the land rarely benefit. “Pipeline” follows which challenges the damage done and the risks of sacrificing the security of land and water resources, all for the profits of the oil and gas companies. In “The Elliott,” the lyrics celebrate the Oregon forest that had been threatened with sale and a vast majority of it clear-cut, to which Tucker sings, “Enough, enough, the land has given us enough, a balance must be struck.”
To match these potent lyrics of ecological and political protest, Filthy Friends have delivered equal vital rock songs, often rooted in classic rock chord progressions and simple hooky riffs, like the opening of “One Flew East,” or the familiar Pretender’s feel of “Only Lovers Are Broken” and “Break Me,” with Tucker echoing a younger Chrissie Hynde. The band delivers all ten tracks with a mix of jangly melodicism and punk determination, rocking on anthems that demand we move from complacency to activism, from self-interest to concern for the environment and it’s impact on all of life.
They close out the album, with two that sum up the record succinctly. “Last Chance County” is a full-on punk rant in the spirit of Patti Smith, full of grinding guitars, while “Hey Lacey” is the album’s only acoustic turn, where Tucker sings of the coming winter, and “the wind is stronger than before,” while the future is uncertain, and as yet unwritten. As elsewhere, Filthy Friends invite us to be moved by the music, and think about how we live, and its impact on the world and climate that we share.
Key Tracks: “November Man” / “Only Lovers Are Broken” / “Emerald Valley”
Artists With Similar Fire: Pretenders / R.E.M. / Sleater-Kinney
Filthy Friends Website
Filthy Friends Facebook
Kill Rock Stars
– Reviewed by Brian Q. Newcomb