It’s strangely comforting that the once famously “angry young man,” Elvis Costello can still surprise and challenge an audience at the age of 65, 42 years after his debut album. The very artist who got banned from “Saturday Night Live” for playing the forbidden song, “Radio Radio,” with the prophetic lyric “I want to bite the hand that feeds me,” could be playing a “greatest hits” repertoire and perhaps satisfy a cadre of his oldest fans, but Costello insists on continuing to push the envelope, introduce new musical ideas and promote new musical projects, even while delivering a great show that pleases his die-hard old school fans.

On Tuesday night, in the intimate confines of the sold-out Taft Theatre, Costello allowed his rebel side to show through. One example came half way through the two-hour “an evening with” performance, when Costello took off his guitar and moved to the piano, occupied most of the evening by his veteran sideman, Steve Nieve. By way of introduction, Costello told the crowd the story behind the musical he’s collaborated on based on the 1957 film, “A Face in the Crowd,” which starred Andy Griffith. In Costello’s telling, the 62 year-old film about the making of a political star from a “snake oil” salesman seemed profoundly relevant, as did the musical setting for the song of that name. Staying at the piano, Costello continued with the theme, playing a second song from the musical, this one an appropriate political campaign anthem, “Blood & Hot Sauce.”

Costello opened the show backed by his long-time band, The Imposters, Nieve and drummer Pete Thomas where both in his original band The Attractions in ’77, and bassist Davey Faragher, who joined them in 2002 (previously played in Cracker, and supporting John Hiatt), and the inimitable quartet were joined by two background singers, Kitten Karoi and Brianna Lee. Given the tour’s name, “Just Trust,” it’s no surprise that they kicked things off with two from “Trust” from 1981, “Strict Time” and the much bigger fan favorite, “Clubland,” both of which benefitted from Nieve’s early rock & roll boogie woogie on the piano. At the beginning of “Clubland,” Costello said how great it was to be back in Cincinnatti, and then asked for an honest response, “How many of you were at Bogarts?,” then saying they played two shows on the same night in 1978.

Costello played a fun guitar solo toward the end of “Clubland,” his effects giving his Fender Jazzmaster a sound similar to a burping saxophone, then dressed in a silver suit jacket and wearing a white Riverboat Gambler’s hat, he led the band into two from 1979’s “Armed Forces.” “Green Shirt” came with a driving beat with strong accents from Thomas, while keyboardist Nieve moved to his second tier of instruments to add a Hammond, played through a whirling Leslie speaker. Costello, seeming eager to narrate the evening, told a story of his younger self at a time when he was seeking to rid the world of alcohol one drink after another, in love with a taxi driver on his way to Mexico out of Tucson, even throwing in a lyric from the Beatles’ song “Get Back” as a tease. Costello wanted to listen to the Sir Douglas Quintet on the radio, “I Just Can’t Be Real,” but he split with the taxi driver because she preferred Pink Floyd’s “Dark Side of the Moon.” All of this led into “Accidents Will Happen,” which opened with Nieve playing majestically on the synthesizer.

Happy to name drop, Costello’s next song was “Photographs Can Lie,” one of three songs from his latest album, Look Now, which were co-written with Burt Bacharach. For this song, Costello showcased his crooner voice, something that has developed in his later years, ignoring his guitar until late in the song when he played brief buzzsaw bursts of solo between the “oooh’s” of his background singers.

Next, Costello returned to the “Trust” album for the textured tones of “Watch Your Step,” but then leapt into one of the evening’s highlights a rocking rendition of “Mystery Dance,” going all the way back to his ’77 debut, that built and built to a punchy climax on Nieve’s keyboards and Thomas’ drums, for which Costello brought a second, somewhat distorted microphone into play. They followed this fun, dance number with the evening’s hardest rocker, “Uncomplicated,” the lead track of his 1986 underrated album, “Blood & Chocolate.” Thomas fueled the song’s dense rhythm, while Costello’s guitar leaned toward intense tones on one of the evening’s most furious solos. Then, suggesting the next song came from South America, they played a more obscure track from the 2002 release, “When I Was Cruel,” which jived on a bit of a bossa nova beat, and again included Costello on a fiery guitar solo at the end.

For “Little Triggers,” a beautiful ballad that leans heavily on piano, from 1978’s “This Year’s Model.” That was followed by the evening’s most enjoyable production number, “Watching the Detectives” one of the many great songs on the ’77 debut, which featured film posters for crime noir movies on the large screens behind the band, while Costello was drenched in deep red or green lights while the song was extended to include several lengthy guitar solos. Then, he moved to piano to describe the storyline and play the two songs from his soon-to-appear musical.

Returning to the guitar, but this time with his two background vocalists moving to his right and left for the rest of the show, Costello continued his narrations, celebrating his collaboration with Carole King, again from his latest album, “Burnt Sugar Is So Bitter.” That he included a Joe Jackson reference in his description of the song’s intent, “Is he really going out with her?” did not go unnoticed by the audience, which hooted and hollered in response, and neither did the fact that Costello ended the song with yet another smoking guitar solo.

“High Fidelity,” from the 1980 album “Get Happy!!” came next, played with the fun, lively spirit of the original, and was followed by “From a Whisper to a Scream,” with all it’s lovely “oh, oh, ooh’s” from the background singers. And here it felt like Costello was beginning to pick up speed, as he launched into one of his most deliriously popular rockers, “Pump It Up.”

And again, this is where Costello’s rebellious nature reappeared. We’re 90 minutes in, and he’s just played one of the best fast, pump your fists in the air and pogo rockers in his voluminous repertoire and one assumes he’s going to play loud rockers the rest of the way out… but no… from “Pump It Up,” he stills the crowd to a quiet standstill, more or less against the collective will of the crowd, as one guy yells out “Radio Radio.” And like a gentle parent, Costello says, humorously dropping the name of the tour into place, “You’re just going to have to trust that we’ll get to that.”

And then in agonizingly slow, drawn out fashion he began to sing the intro to one of his most beloved, and intimate ballads, each line of lyric followed by a long pause. “It’s funny to be seeing you, after so long, girl…” “The way you look I understand that you are not impressed…” Then, agonizingly, “I heard you let that little friend of mine…” “Take off your party dress…” and sure enough, he invited us to join and sing along to “Alison,” and especially drawn out our voices for the debut album’s title, “My Aim is True.” Again, as with the Bacharach and King numbers, Costello drew on his crooner’s pipes, and got plenty of support from his two background vocalists. It was a lovely, almost spiritual moment.

And then, as if he’d not forgotten the ledge he’d left us hanging from at the climax of “Pump It Up,” he kicked the band back into high gear and started “Radio Radio,” which my now got some of the older, committed to sitting down fans, on their feet. That one’s kind of a sing along, too… but surely “(What’s So Funny ‘Bout) Peace, Love, & Understanding” is, and while it was clear throughout the set what a nice contribution the background singers were making, adding soulful screams and shouts as songs required, but you could really feel it on that lyric about the “sweet harmonies,” where Lee and Karoi really shined.

And here, I thought Costello was about to call it a night, but he surprised me (and plenty of folk who were reaching for their coats), by leading the band into “Heart of the City,” a cover of a song by the same author of “PL&U,” Nick Lowe, Costello’s earliest producer. He followed that with “Crawling to the U.S.A.,” a song all the way back on “This Year’s Model.” And then, at nearly 2 hours, Costello wrapped our evening together with a fine version of “Everyday I Write the Book,” which had been a true airplay/video hit for Costello from the 1983 album, “Punch the Clock.” Costello used the extended instrumental sections of the song to introduce his valiant cohorts, the wonderful band, two of which have been not far from his side in the 40 plus years of his recording and touring career. You can’t say enough about the mesmerizing keyboard talent of Steve Nieve, but on this night drummer Pete Thomas as well as bassist Davey Faragher shined brightly as the Imposter In Chief. 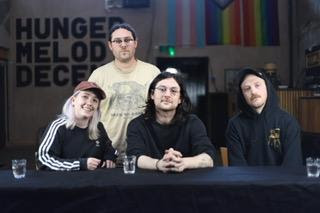