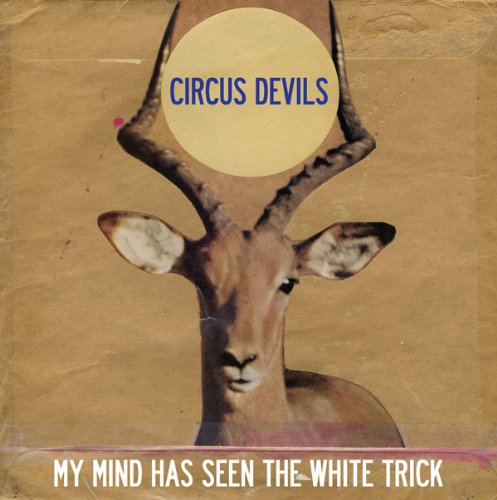 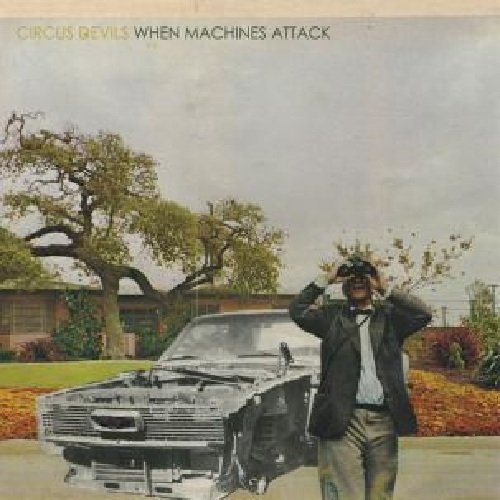 Fire Note Says: Two Circus Devils records – two completely different releases!
Album Review: It was just the other day that I was talking Robert Pollard projects and Circus Devils came up in the conversation. Of course, this is Pollard’s long standing collaboration with the Tobias brothers Todd and Tim. I was telling this friend that the Circus Devils are like the elegant sours of craft beer. Sour beers are delicious but they should never be the first style of craft beer that you start out drinking. The same can be said about Circus Devils. They should never be the first Pollard project that you start out with but a group that you need to hear and can’t appreciate until you have a full understanding of his vast catalog.
The simultaneous release of My Mind Has Seen The White Trick and When Machines Attack brings a little over 80 minutes of Devils’ music to you and finds the trio in prime form. The really interesting factoid surrounding these releases is their opposite writing styles. Trick had the vocals recorded first and then the music added afterwards and Machines had the music recorded first and the vocals added afterwards. It really sets up a test of the new style found on Trick compared to all of the Circus Devils releases of the past and more specifically Machines.

Just knowing that the vocal melodies were recorded first on My Mind Has Seen The White Trick will give you a little more appreciation for the record. I also think compared to the two, it flows just a bit better and I found the overall instrumentation to be more unique when looking back into the Circus Devils catalog. The second track on Trick, “It Floors The Jane,” is a just over four minute pulsing track that is not only the longest Devils track since 2009, but sizzles with a confident attitude that sets a tone upfront for this record. “Bird Zone” follows and stands out with its jazzy key backdrop and sway as it is one of the more memorable tunes in the bands catalog. Other things on this album help push Trick to the next Circus Devil level, such as the strong riff that drives “Deliver Ice Cream (You Must)” while combining with heavy drums and a guitar solo all give it a classic rock vibe which I really liked. There is the ballad “Great Orphan” which might not have happened with the normal writing style as it is really straightforward while “Subway To Human Nature” has this odd sing along capability to it, even though it is much more eclectic and dark. Its off kilter and somewhat out of tune chorus is Halloween catchy while the dramatic verse “we’re making breakfast food; for hungry nuns, dog meat de-boned to dust; come in get stoned with me” represents the complex wordplay you expect. The rest of the record has little surprises around every corner which affirms it’s a Circus Devils release while the music just continually enhances Pollard’s early vocal handy work.

When Machines Attack is a much darker record that kicks off with “Beyond The Sky” which features Pollard’s hovering spoken words coming at you from above. “You’re Not A Police Car” follows it with its peeling out and crashing car sound effects as the song maintains its edgy intensity. The album is full of vocal trickery which gives it a more robotic feel when it’s paired with the very deliberate sound movements that create the song structures. Looming large drums, chaotic excited vocals and injected sound effects sum up When Machines Attack. It is an engaging record that keeps you at arm’s length as its interesting soundscapes still give you a chill.
What I like about all Circus Devils material is that they always support a mood or theme that can be subtle and/or over the top. The jazz elements and new composing style on My Mind Has Seen The White Trick not only set it up a notch from When Machines Attack but also make it one of the more intriguing listens in the Circus Devils collection. When Machines Attack is not a bad record by any means as long time fans should still eat up its mechanical nuances. Together these records form a great picture of how diverse the Circus Devils can be and only encourage the listener to dig deeper into their catalog, which is never a bad thing!
Key Tracks Trick: “Bird Zone,” “Subway To Human Nature,” “Wizard”
Key Tracks Machines: “Idiot Tree,” “Craftwork Man,” “Doberman Wasps”
Artists With Similar Fire: Captain Beefheart / The Frogs / Scott Walker
Circus Devils Website
Circus Devils Facebook
Happy Jack Rock Records
– Reviewed by Christopher Anthony