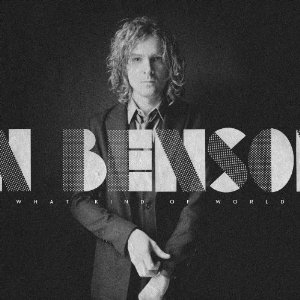 Benson is best known as the voice beside Jack White in The Raconteurs but back in 1996 he released a stellar debut called One Mississippi that was filled to the brim with a catchy guitar driven power pop and then he followed it up with the equally enjoyable Lapalco in 2002! Benson now comes at you with a much more mature and controlled pace on What Kind Of World.

It is an album that Benson recorded and self-produced in his current hometown of Nashville which made the entire process much easier for him. You can hear his relaxed self in the opening title track as its mid tempo slowly builds its intensity before transitioning into the sprawling ballad “Bad For Me”. These are shining tracks of what Benson does best.

Later in the record Benson once again beams when he kicks up the guitars and comes at you full steam like on “Here In The Deadlights” or the more crunching work in “Thru The Ceiling”. These tracks stand out as Benson is a true master of the big chorus. What Kind Of World suffers most though when Benson plays the singer/songwriter more straight up and does not add anything in to grab the listener. The issue for this is that I doubt What Kind Of World will grab many new followers but the good news for fans is that this does not happen that often and will still be a must listen for them. I don’t know if a power pop record can play it too safe but that is my overall feeling on the fifth long player from singer/songwriter Brendan Benson as it just does not have a consistent edge. Even though What Kind Of World does not reclaim Benson’s early mojo it does set a nice path for his future that is only one big hook away from big time success!