Black Rebel Motorcycle Club: Wrong Creatures Tour, Newport Music Hall, Columbus, Ohio – Friday, February 9, 2018
The Black Rebel Motorcycle Club, with it’s gloriously long moniker, arrived in middle America in support of their 8th album, Wrong Creatures (see album review HERE) on Friday night, playing the Columbus club closest to the Ohio State campus on High St. to a pretty full house made up of curious college students and a fair number of fans who were back to see the West Coast post-punk alt-rock trio’s return.
Eager to display their newest material they opened their 90 minute concert with 3 from their latest, sandwiching the album’s most obvious and promising single, “Little Thing Gone Wild,” between the disc’s opening tracks, “Spook” and “King of Bones.” Feedback drenched would prove to be an applicable descriptor throughout the set, while guitarist Peter Hayes and bassist Robert Levon Been traded vocals back and forth, often in the same song. The sound suitably spooky from the get go, and Hayes offering a screaming solo in “Bones,” while drummer Leah Shapiro rocked with solid authority throughout. 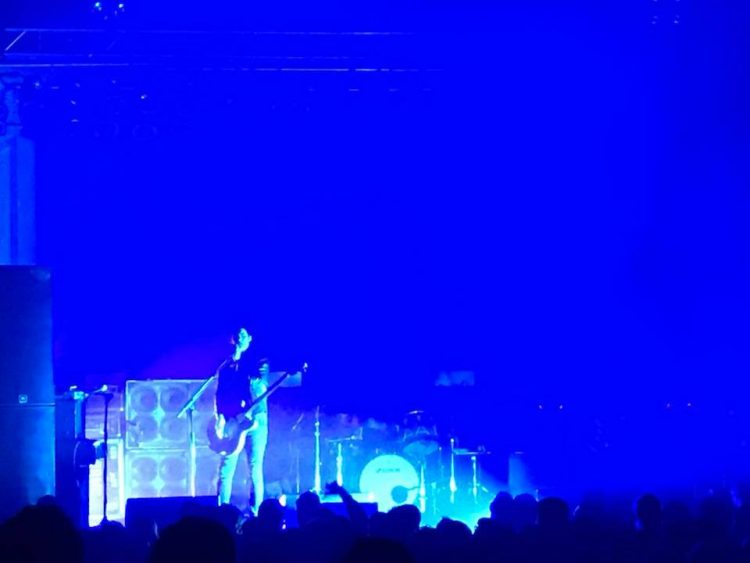 The pair moved to acoustic guitars for “Beat the Devil’s Tattoo,” an obvious fan favorite, and then Hayes added a reverb soaked harmonica to the mix on the demented Delta blues of “Ain’t No Easy Way.” Then it was back to their primary instruments, with Hayes adding a keyboard loop, and Been a solid bass line for the rocker, “Stop.”
Then they returned to the new one for “Question of Faith,” with the two vocalists switching instruments as well as sides of the stage, Hayes playing bass, and Been on guitar, who incidentally soloed like a bass player (a common malady). They returned to original positions, but not yet to their original sound. “Circus Bazooko,” with it’s “acid trip on a carousel” keyboard riff, proved more in keeping with the rest of the BRMC repertoire live than in the studio version, but I didn’t find it more enjoyable. 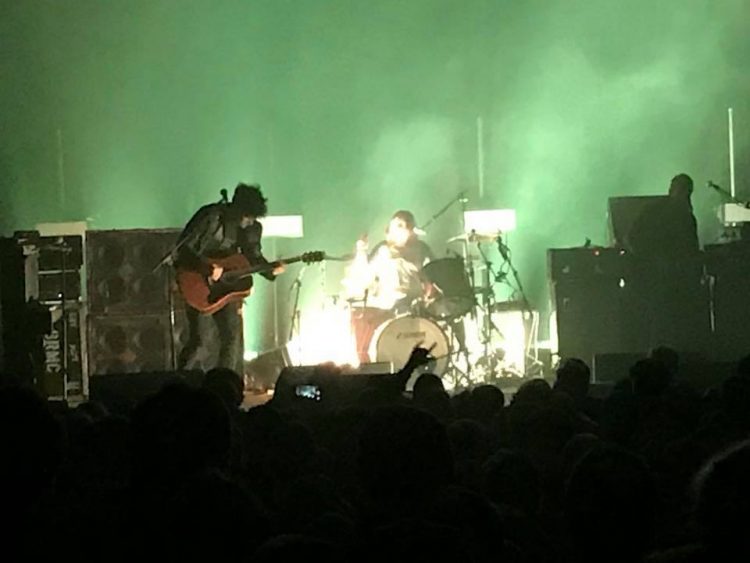 With “Berlin,” which dates back to ‘07’s Baby 81 album, the band recovered the set’s previous momentum with one of the strongest riff rockers of their set, and then continued in that direction with “Conscience Killer,” and followed up with “White Palms,” from the band’s 2001 eponymous debut, which they returned to more and more as the set moved toward it’s climax.
At this point, it’s probably necessary to remind you of the “feedback drenched” quality inherent in the loud, noisy processed guitars that came to define the post-punk and shoe-gazing movements that most inspired BRMC from the beginning. Nowhere was this more obvious on than in the dense, yet moving cover of John Lennon’s “I Don’t Wanna Be a Soldier,” where they ignored the rest of the lyrics and just repeated the refrain, “I don’t wanna be a soldier, Mama, I don’t wanna die.” 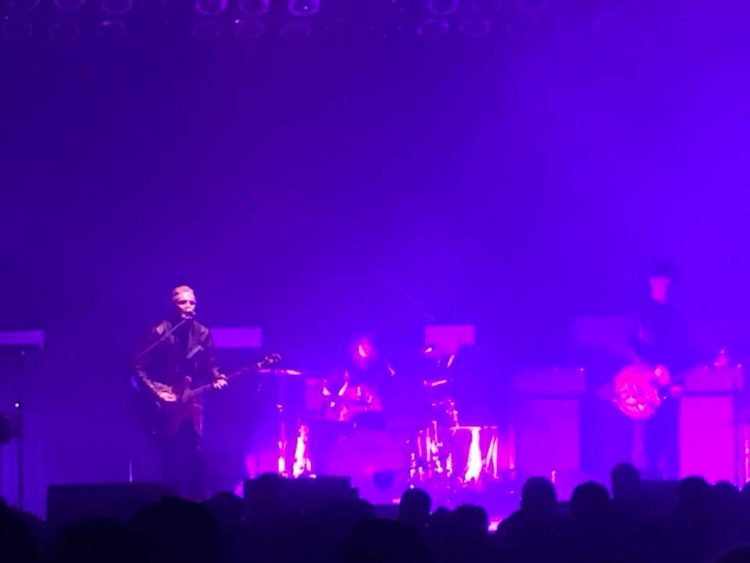 The returned to the new one for another of the album’s more promising airplay candidates, “Echo,” which struck a slow haunted groove, and was followed by another from Wrong Creatures, “Carried From the Start,” for which Been added a keyboard part, while Hayes played an extra tom-tom drum, that was set to echo in repeat. Hayes and Shapiro then left the stage, and Been sang an acoustic version of the Pogue (Ewan MacColl) classic, “Dirty Old Town,” after assuring the Columbus audience that he was sincere in saying how great it was to be back and playing new music.
The rest of the band returned for “Shuffle Your Feet,” a Dylanesque song that brought back the harmonica into the mix, and was followed by “Love Burns” and “All Rise,” which grew in musical intensity that was mirrored in the increased use of strong strobe lights facing the audience. It’s not uncommon for these club shows to avoid spotlights, and allow the musicians to get lost in the shadows due to the intense rear-lighting dynamics, but I’ve never seen a band embrace their on stage anonymity with the commitment of BRMC, they cast a bold profile nonetheless, with Been often holding his bass high like he was aiming a rifle and letting it hang low with his strap dangling behind his legs. 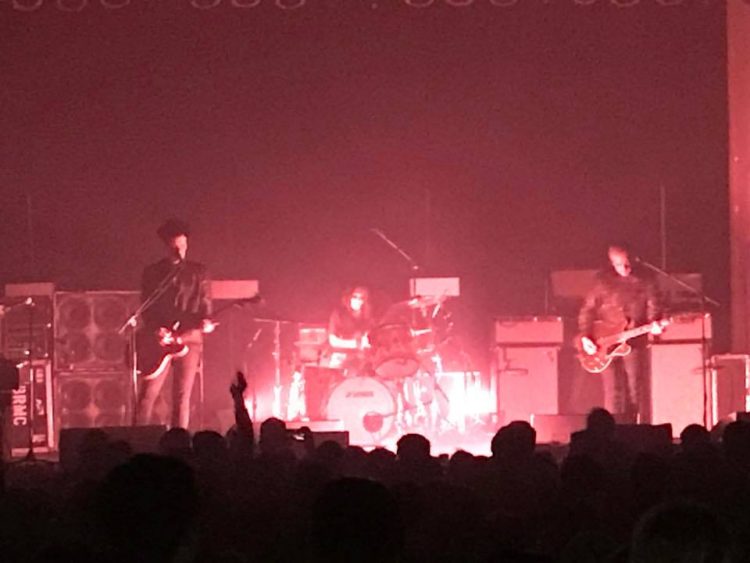 I had checked out a couple setlists from previous shows in anticipation of this Newport gig, and the one real surprise was the addition of “Awake,” another from the band’s debut, to the set. Been followed that, with a playful experimental thing, playing some high squealing notes on an echoing loop that he stopped abruptly about a minute in, saying “You’re not ready for that,” and then dove in the strong bold bass line of “Six Barrel Shotgun.” Here the music and the lighting moved toward the set’s climax with growing intensity, and the set closer, “Spread Your Love,” also from that debut album.
The band returned to encore on “Ninth Configuration,” from the latest, and then returning again to their earliest work as a band, closed out the evening with “Whatever Happened to My Rock ‘n’ Roll (Punk Song),” which answered it’s own question, but rocking with reckless abandon, loud, noisy, and yes, drenched in feedback and marked as silhouettes against the onslaught of strobe lights that felt like an obvious attempt to blind us all before we went deaf. Which is to say, like most of the evening’s music, it was a pretty stellar Black Rebel Motorcycle Club show.
-Reviewed by Brian Q. Newcomb