Bill Mallonee & The Big Sky Ramblers: The Rags Of Absence 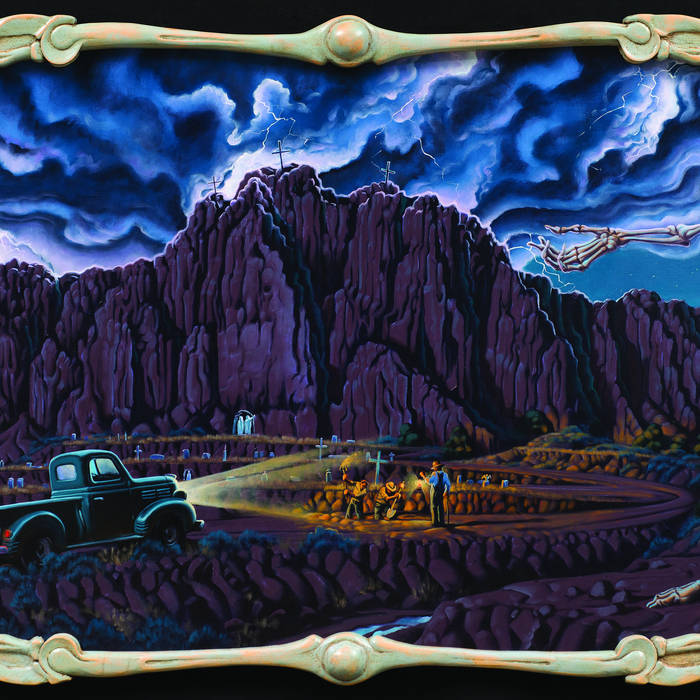 Fire Note Says: Mallonee’s literate poetic sensibilities matched by the music’s virtuosity and tone, produce another powerful concoction.
Album Review: The first time I heard songs by singer/songwriter Bill Mallonee was when his debut major label album with Vigilantes of Love arrived in my mailbox in 1991 with a bag of finishing nails. The album called Driving the Nails, featuring an aggressive blend of folk and punk sensibilities, released on short-lived Core Records, beginning a long history of brief alliances with promising recording/distribution companies that apart from the music tells the tale of the fine Athens, GA band.
Along with the changing allegiances of label support and promises, the band’s personnel had a way of evolving, with solid players moving in and out of the band at regular intervals, the one constant being the passionate voice and songs of Mallonee. I have many warm memories of seeing VoL live, the earliest being Mallonee backed largely by Billy Holmes on mandolin playing many of the songs from the largely acoustic classic Killing Floor, which had been co-produced by R.E.M.’s Peter Buck. By the time they had signed to Capricorn for four albums, they had morphed into an earthy rock four-piece including guitarist Newton Carter, bassist David LaBruyere (went on to play with John Mayer), and drummer Travis McNabb (who moved on to Better Than Ezra and country band Sugarland). The best of that period, in my opinion was Blister Soul (Capricorn, 1995).

Another solid musical period for VoL followed with Kenny Hutson on guitars and pedal steel, Kevin Heuer on drums and Jacob Bradley on bass, which produced the high water mark, Audible Sigh (2000), which was produced by Americana hero Buddy Miller, a surprising turn at a Brit-pop sound on Summershine (2001), and a fine live set captured on video, Resplendent (Audibly Live), (2002), which marked the end of the band as a moniker. (It’s worth noting, especially for vinyl fans, Mallonee has arranged for a limited edition two-disc version of Audible Sigh, produced by Buddy Miller, to be pressed later this year, and is taking pre-orders now).

It was never in doubt that Bill Mallonee would continue on as a solo act, and that he has and then some. Rags of Absence is something like his 77th full-length album’s worth of material recorded over the course of nearly three decades. There are people who write and play music because the love it and they can, and then there are those people who can’t do anything else. For them, it’s a calling, it’s a cross between journaling and therapy, and to lay down music and walk away would be leaving behind a part of themselves, probably the best part.

A decade ago, Paste Magazine placed Mallonee at #65 on their list of Best Living Songwriters, which was topped of course by Bruce Springsteen, Neil Young, and Bob Dylan. Like those greats, and having more in common with Woody Guthrie, John Prine and Merle Haggard, Mallonee writes songs that capture the vagaries of life and the struggles of the common working class person, like the long-distance truck driver in “I Pulled Into Reno (Cause I Could Not Make Salt Lake). Perhaps it was years of travelling the country from gig to gig in a van that inspired “Boom & Bust Towns,” with a vagrant’s insight that “most decent folk don’t want you around.”

A few years ago, Mallonee and his wife and touring partner Muriah Rose (see my review of her debut and Mallonee’s last album HERE), got off the road, and settled down in New Mexico, where the always prolific songwriter has become even more productive of late. Early albums in that process found Mallonee producing competent recordings—playing most all the instruments except for the piano and backing vocals that brought Rose into the mix—but at times his efforts felt stiff, limited. They would have benefitted from other players interacting with in a song’s arrangement, more of a live band in the studio feel, and even a guitar soloist with a more distinct phrasing.

On Rags of Absence you can hear what a few more years of woodshedding on his instruments has accomplished, as Mallonee has figured out how to record himself on drums, bass, various guitars and bit of harmonica and make it sound like a band playing live in the studio, bringing greater musical depth and dexterity to his arrangements. Most notable is Mallonee’s slide steel playing, and his more emotional soloing which is especially noticeable on “Nothing Here Was Ever Meant to Last,” where there are multiple guitars playing in various harmonies and some stellar moments where the guitar tones give voice to the song’s ache and sorrow. This is not flashy playing for it’s own sake, it’s just the kind of playing that marks the best recordings by the most memorable players where the song’s feelings flow through every aspect in the music. A couple times, I wondered how hard it must have been to play these parts separately, and imagined the hard work it must be to produce the effortless combo feel of the final recording.
But sounding good is one thing, writing really good songs is another, and once again Mallonee is able to bring it all together. There’s country gospel feel on “If You Pray (You’d Better Cry, Cry, Cry),” with Rose added a strong harmony. “Covering Ground” feels like a bluesy Neil Young slow rocker, where the guitars and Mallonee’s vocal manage to echo “the cries of the forgotten.” Mallonee’s literate poetic sensibilities matched by the music’s virtuosity and tone, produce another powerful concoction.
Key Tracks: “Nothing Here Was Ever Meant to Last” / “I Pulled Into Reno” / “Covering Ground”
Artists With Similar Fire: Neil Young / John Prine / Steve Earle