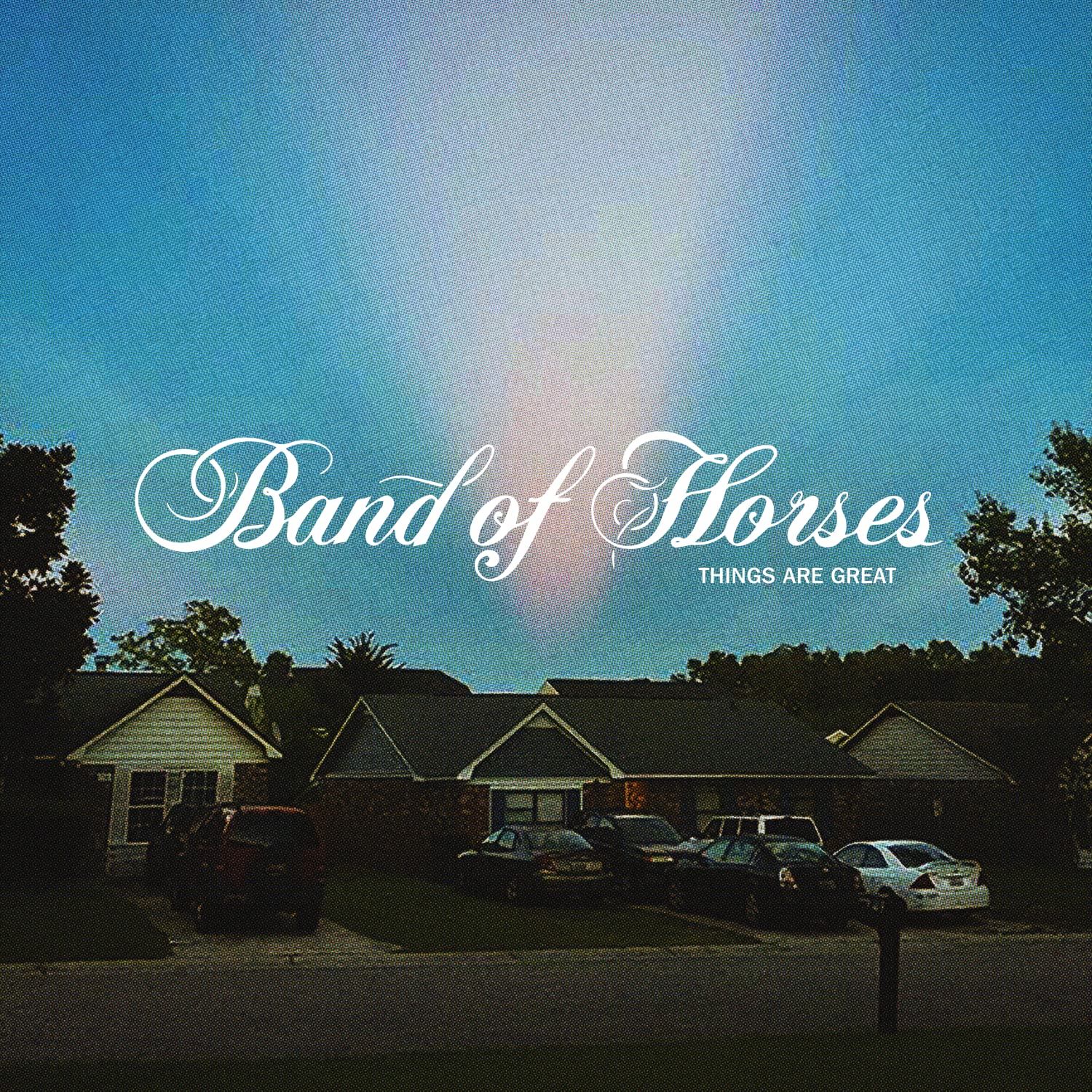 We all know, Things Are Great is what you say, when you don’t want to tell people that you’re really going through a challenging time. It’s the more grandiose version of “I’m fine.” And like many of the songs here by Ben Bridwell and his Band of Horses, the overall effect is uplifting and liberating, even if the underlying story feels painful or at best unresolved. Take “Lights” with it’s catchy guitar hooks coming from Bridwell and Ian MacDougall, and Bridwell’s high soaring vocal with the steady repeats of “Lights turn on, lights turn off, lights turn on.” It’s got that good time, bright rock & roll feel built into it. If you’re not looking too closely at the lyrics, you wouldn’t even realize the protagonist is “getting over the worst shit ever,” that the lights in question are security lights that come with guards and “cops in the yard,” and evidently, it’s taking place at a crime scene. How’s things? “Just great.”

Much of Band of Horses’ sixth album, arriving six years after Why Are You OK, feels like a return to the band’s early sound, when playing gigs with Iron & Wine in Seattle, from their early Sub Pop releases. The alt country turns and pop song pretentions of later years are played down to let the band’s jangly, echo-laden guitars, Bridwell’s high anthemic vocal melody lines, and folk rock storytelling come back to the fore, as we hear on singles like “Crutch” and “Warning Signs.” Bridwell seems to take pleasure in playing with words, or slight alterations to established phrases, like in the title to “Ice Night We’re Having.” “Crutch” is framed around the idea of having a crush on someone you fancy, and the idea that a person can come to lean on one’s relationship in unhealthy ways. But again, Bridwell hangs this curiosity about love becoming co-dependent in a fast, fun jangly pop rock chorus, with the repeated refrain that “I got a crutch on you,” which has the overall impact on the listener as uplifting and light.

In “Warning Signs,” Bridwell recalls a time when he lost his voice during a concert in Sydney, Australia and wept in front of his audience. In the song he’s telling the story to a nurse, hoping “not to cry in front of people at work,” while refusing help, therapy, even sympathy.” But again, those bright guitar sounds, as so often happens in rock songs as a genre, make it seem that just admitting the problem in a determined tone, gives the listener a feeling of overcoming an obstacle, having held on against the odds, even though the lyrics suggests that the outcome remains uncertain. In the slower “In The Hard Times,” the singer is coping with being deserted by a lover, while “In Need of Repair” finds that we “can’t do all the things that we used to do, and it sucks,” but the “ooh, ooh, oohs” and the big, echoey guitars can make you forget that “what you’re going through, it’s crazy.” Those “ooh, oohs” find their way into “Aftermath” as well, and throughout the album they work together with the band’s determination to affirm that “things are great,” even if you’re in a “cow shit smelling hellhole called `Coalinga.’”

Bridwell and the rest of his South Carolina bandmates – which includes drummer Creighton Barrett, multi-instrumentalist Ryan Monroe, bassist Matt Gentling, and Brett Nash who replaced lead guitarist Ian MacDougall since the album was recorded – have returned to the band’s strengths in a pleasing collection of conventional alternative rock sounds. Band of Horses heads out on a tour of the country’s summer sheds opening for The Black Keys, and no doubt things are going to be great.

Kevin Morby – “This Is A Photograph” [Video]