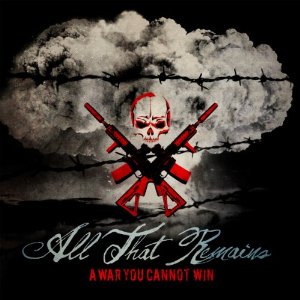 Fire Note Says: All That Remains seem to be fighting a war they cannot win.
Album Review: In 2008, All That Remains released Overcome; the album that I argue is their definitive masterwork. The problem in creating an album like Overcome is that all subsequent albums are going to be measured up to that standard. Therefore, when you released an album like A War You Cannot Win, which features a watered down, streamlined caricature of what makes the band really good, you can’t expect fans to really enjoy it.
I don’t want to hate on the record too much. It’s certainly not the worst thing I’ve ever heard (I reserve name-calling for things like Brokencyde or AxCx), but it does have more than its fair share of blandness. Many of the songs have nearly identical song structures, though for metalcore bands, this is a fairly common occurrence. But what made All That Remains different for me was their use of atypical chord structuring and chord progression. This record has sort of thrown that type of songwriting out the window. In fact, the song “Asking Too Much” could have been written by any pop-punk rocker who knows at least four power chords and “What If I Was Nothing” sounds like it was an unused track from a Five Finger Death Punch record. Lead guitar work seems virtually non-existent on the album, which I think is why so much of it sounds so bland. The lyrical content on the record has changed as well. Somehow, their older lyrics seem to have a bit more depth and substance than their more recent ones. 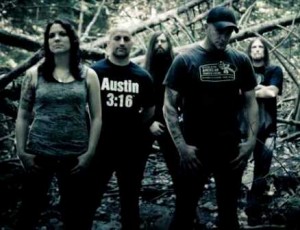 But for its flaws, there are still some bright points on the record. “Not Fading” features very good guitar work, including a solo worthy of inclusion on Overcome. The title track is another very well put together song on the album. Its harmonized guitar intro is part of what makes All That Remains worth listening. The chorus, which slows down from the fast-paced verses, provides a melody that will be stuck in your head.
Overall, though it might be their weakest effort to date, long-time All That Remains fans still might be able to get their head banging fix from it. But I wouldn’t recommend it to someone who has never heard of All That Remains, and certainly not as a starting point for getting into the band.
Key Tracks: “Not Fading,” “A War You Cannot Win,” “You Can’t Fill My Shadow”
Artists With Similar Fire: Bullet for My Valentine / Fiver Finger Death Punch / As I Lay Dying
All That Remains Website
All That Remains Facebook
Razor & Tie Records
-Reviewed by Christian Yates