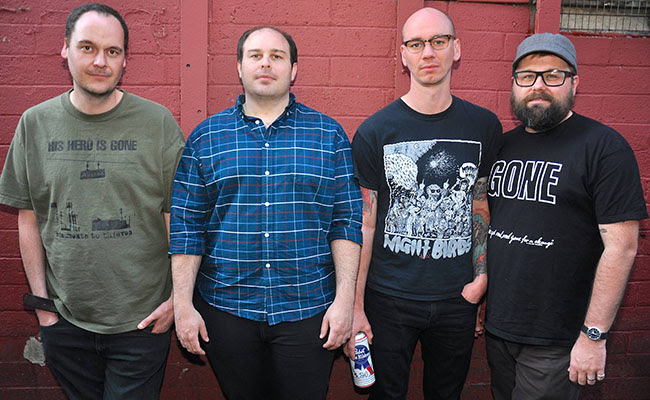 For those unfamiliar, Low Culture features members of Shang-A-Lang and Marked Men and they released their debut, Screens, in 2013. The band members keep up a busy schedule outside the group so it is exciting to hear new music from their sophomore effort, Places To Hide, which is out today via Dirtnap Records.
Things to know about Low Culture. 3/4ths of the band has relocated from Las Cruces, NM to Portland, OR, with the 4/4th soon to follow. They have released 7”s on Dirtnap, Dead Broke, and La-Ti-Da Records. They found a new bass player in Chicago transplant Jay Castaldi (MOTO, Lynyrd’s Innards, more). Half of the band has helped form a killer local hardcore band called Macho Boys. Singer/Guitarist Chris Mason has released tons of essential records on one of TFN favorite labels Dirt Cult Records. The group recently has done some touring, including high profile shows like the Dirtnap Records Anniversary, Awesome Fest, Ottawa Explosion, and more so it is time to discover them if you still have missed the boat so far.
Today’s Friday Fire Track highlights that the band has not missed a beat with this melodic punk tasty treat. “Comfort Zones” will have you singling along “you don’t care – I don’t know” at the same high energy tone as Low Culture quickly and we can tell you that the full length, Places To Hide, gives you 13 more quality tracks just like it!