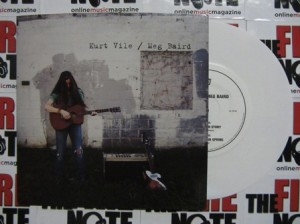 The December installment of Matador Records Singles Going Home Alone for 2012 brings us a collaboration between troubadour Kurt Vile and Espers’ Meg Baird. This pairing is not much of a surprise as the pair have toured together in the past and Baird sang on Kurt Vile’s 2011 record Smoke Ring For My Halo.
The 7-inch A-side finds Kurt Vile covering English folk legend Michael Chapman’s “Just Another Story” in a fairly straight up and solid version (You can see Chapman’s version below). Vile has the perfect hush but serious vocals as the song sounds complete with his acoustic electric guitar. The B-side here features Meg Baird taking on Kurt Vile’s “Classic Rock In Spring” which was on his 2008 solo debut Constant Hitmaker. Baird takes the same soft singing approach here on the track but with the female lead different points of the song seem highlighted like when she emphasizes the line “When you hear the Bob Seger song; You know I’ll be long gone” it has a completely different impact on the listener. I think this always is the test for a quality cover version and she succeeds!
The 7-inch comes in a full artwork cardboard jacket that features a plugged in solo Vile on the cover and a nice pic of Vile, Baird and Chapman on the back just sitting on a couch. The vinyl is a solid white wax and is limited to 750 copies. One small point of interest is that the label on the 7-inch has 45 RPM printed on the record but both sides play at 33 1/3 RPM.
Kurt Vile Website
Kurt Vile Facebook
Matador Records