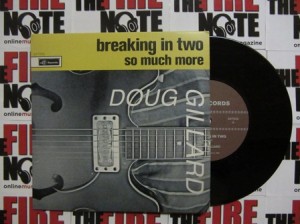 Doug Gillard is a talented guitarist and songwriter who has performed with a lengthy list of bands and artists with some of the most notable being Guided By Voices, Death Of Samantha, Gem, Lifeguards and Cobra Verde. He currently is the active touring guitarist with Nada Surf.
Most people probably don’t know that Gillard is also part of Bambi Kino which is an indie supergroup of sorts that put a record out in 2011 that covered 12 very early Beatles tracks. This love for a pure classic sounding rock and Doug’s solo career are all highlighted on this 7-inch. The A-side “Breaking in Two” is a nice mid-tempo rocker that brings back this 60’s spirit with a modern clarity. The B-side, “So Much More” is another song that pays its respect to the past with its warm harmonized chorus that lets the song just flow. The most interesting thing about the record is that the release allows for Gillard to let his superb guitar skills take a back seat and showcase his vocal and songwriting strength.
The packaging here is a sturdy front art cardboard jacket with the back featuring a picture of Gillard. The wax is a standard black and still available from his website. Doug Gillard is an excellent guitarist and if you like what you hear I would recommend picking up any of his solo albums.
Doug Gillard Website
Doug Gillard Facebook