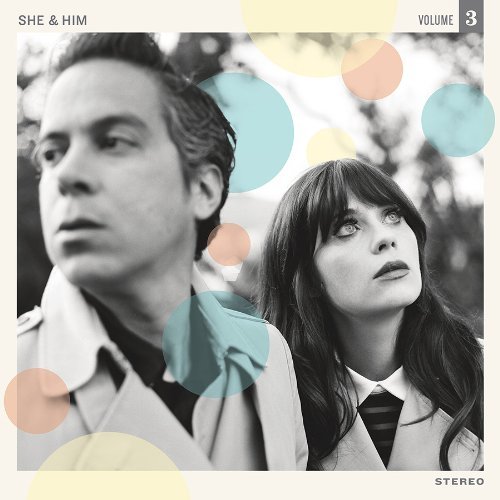 She & Him, aka Zooey Deschanel and M. Ward, will release their third album of original material, entitled Volume 3, on May 7 (May 13 in UK/Europe).
The first 500 LP pre-orders will receive Volume 3 on limited edition robin’s egg blue colored vinyl! Preorders will include a poster and will ship to arrive on our around the release date of May 7.
You can pre-order the record HERE.
With fourteen songs—11 Deschanel originals and three covers—Volume 3 is an effortlessly effervescent, bleached-out-in-the-sun pop record. The album features some of the most dynamic, complex songs Deschanel has ever written, allowing for tempo shifts, disco grooves, string arrangements on multiple tracks, and horn flourishes that perfectly suit the She & Him sound. Written by Deschanel during downtime while filming New Girl, and produced by M. Ward, Volume 3 features guest contributions from NRBQ’s Joey Spampinato, Mike Watt, Tilly and the Wall, Pierre de Reeder from Rilo Kiley, and Tom Hagerman from Devotchka.
Track listing for Volume 3:
1. I’ve Got Your Number, Son
2. Never Wanted Your Love
3. Baby
4. I Could’ve Been Your Girl
5. Turn to White
6. Somebody Sweet to Talk To
7. Something’s Haunting You
8. Together
9. Hold Me, Thrill Me, Kiss Me
10. Snow Queen
11. Sunday Girl
12. London
13. Shadow of Love
14. Reprise (I Could’ve Been Your Girl)

Billy Bragg Returns With New Video – “No One Knows Nothing Anymore”