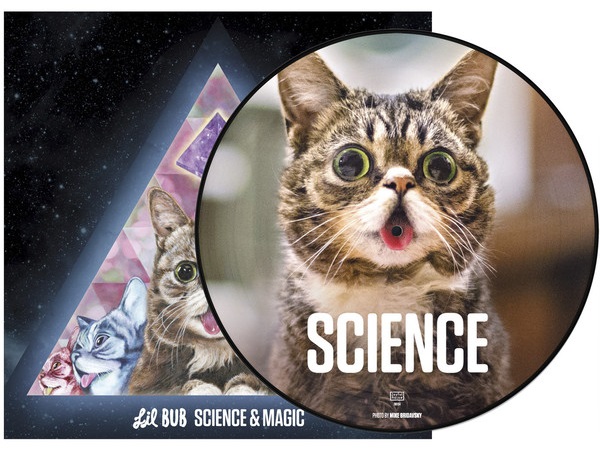 I am not sure what to say about this except “it is what it is!” Per the press release, Lil BUB apparently is tight with Steve Albini, has collaborated musically with Andrew W.K., produced a single for Kelley Deal, had a song written for her by Kimya Dawson and Aesop Rock, appears on Run the Jewels’ Meow the Jewels, has worked closely with David Yow, spearheaded 50 Bands and a Cat, has been held by Jonathan Richman, enjoyed Thanksgiving dinner with Murder by Death and more. Now, BUB has announced her own debut album, Science & Magic, to be released December 4th on Joyful Noise Recordings.
As you would guess, Joyful Noise has pulled out the stops to make this one special. The VIP variant of Science & Magic is currently available for pre-order, with 500 hand-numbered copies on picture disc. The limited vinyl also comes with special artwork and a signature by BUB, herself. There is also the “Cat Eye” Colored Vinyl that is Black inside green plus a standard Black variant if classic is your style. You can pick up all three copies HERE.
25% of net profits from the sale of this album will be donated to Lil BUB’s Big FUND for the ASPCA to benefit special needs pets.

Buck Biloxi And The Fucks: Streets Of Rage [Album Review]