Yola: Stand For Myself [Album Review] 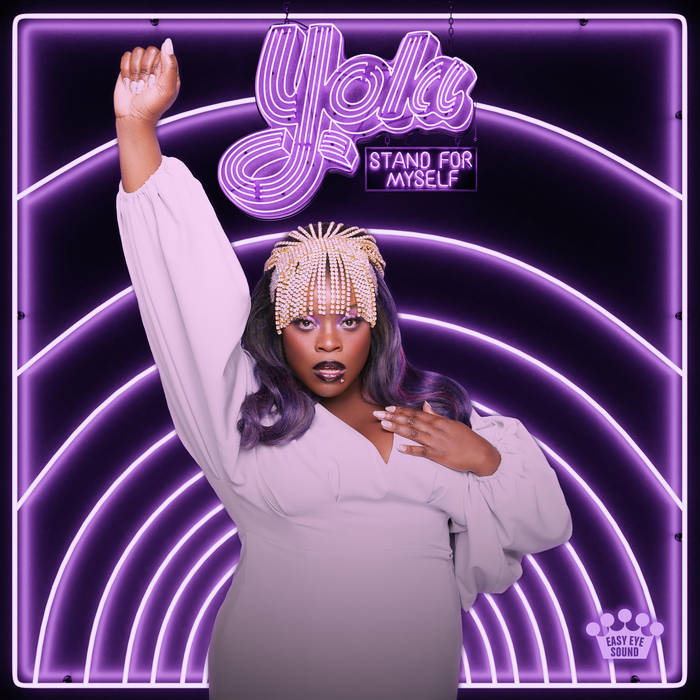 2019 was a great year for British singer/songwriter, Yola, who’s debut solo album Walk Through Fire earned her a Best New Artist nomination at the Grammys. Born Yolanda Quartey in Bristol, England, the expatriate currently living in Nashville spent that summer on tour opening for Sheryl Crow, and contributing to the Highwomen’s self-titled album, sharing lead vocals on the title track alongside Brandi Carlile, Amanda Shires, and Natalie Hemby, some of country music’s best known female artists. Going into 2020, Yola had secured an opening slot on tour with Chris Stapleton, and had been cast to play Sister Rosetta Tharpe, one of rock & roll’s unsung pioneers of the electric guitar, in the Baz Luhrmann’s Elvis bio-pic, but then everything shut down. Yola used that time to write new music with her producer Dan Auerbach, and the result is a sophomore album that expands far beyond the country/Americana stylings of her debut.

At her concert here, two summers back, Yola hinted at her vocal aspirations and influences when she covered Elton John’s “Goodbye Yellow Brick Road,” and closed her set with Aretha Franklin’s version of the Jerry Leiber & Phil Spector standard, “Spanish Harlem,” pulling out the stops and letting her soul singer pipes soar. On Stand For Myself, Yola may start off remembering her hardscrabble early days in “Barely Alive,” but by the time she reaches the album titled 12th track, she’s acknowledged that she’s “still a dreamer,” and Now, I’m alive,” on her own terms. Yola’s country leanings are still present, most notably on “Be My Friend,” which features a harmony vocal from Brandi Carlile, celebrating the value of allies in the struggles of life. In the “Great Divide,” Yola reveals both the depths and heights of her vocal range on then R&B ballad that acknowledges the breaks in the social fabric that binds us together, without naming the issue as racial, gender, or class, but in the funky country/Gospel shouter of the first single, “Diamond Studded Shoes,” she knows that economic injustice is why we have to “fight for the life and soul of the world we know,” because “it ain’t gonna turn out right,” since “a promise is never enough.”

Now, Yola may be on the cover with her fist in the air, but she’s been around long enough to know you make more progress winning people over with soulful melodies and danceable rhythms than with verbal diatribes, and she has what it takes in the golden pop vibes of “Starlight” and “If I Had to Do It Again,” where her mercurial vocals remind one of Diana Ross. The move from the Americana country roots on her debut to a more sophisticated R&B flavored pop feel, relies on Auerbach’s smart use of keys that suggest orchestrations, and a back of solid. Backing vocals. The rhythm section of Nick Movshon, the Dap-King bassist, and drummer Aaron Frazer soften the edges on big countrypolitan numbers like “Whatever You Want,” where she gives those “good old boys” a pass. There’s still a bit of pedal steel in the mix, but Auerbach’s guitars match the brass in the funky “Break The Bough” and lean toward the bright, jazzier tones that fit the move to R&B feel throughout, leaving the screaming and squealing for Yola’s vocals.

Stand For Myself is a declaration of independence from the genre-bending, soulful British transplant, it’s Yola deciding that she can make music that fits her strong vocals, mixing pop, blues, Gospel, soul and R&B freely with the country vibe that first brought her to the party. There’s a handful of strong pop singles here, so in 2021, Yola can take this music as far as she wants to take it, and lots of listeners are likely to come along for the ride.