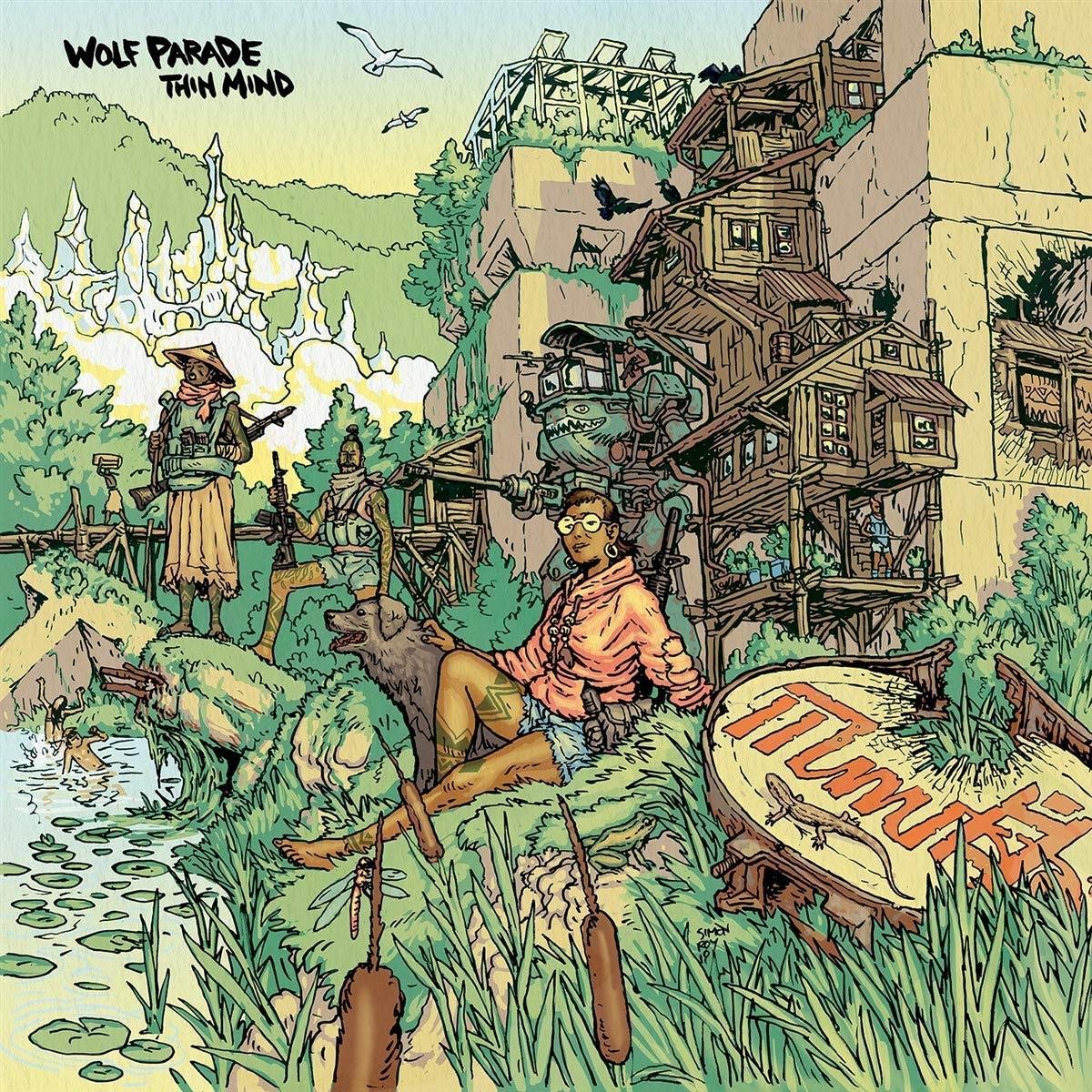 Fire Note Says: Wolf Parade, stripped back to the original Montreal power trio, create a strong mix of 80’s new wave sounds and forward-thinking modern rock on Thin Mind, their 5th album.
Album Review: Thin Mind, the fifth full-length album from Montreal’s Wolf Parade, arrives with the sonic impact and energy of post-punk/new wave acts from the late 70’s thru mid-80’s like Psychedelic Furs, Graham Parker & The Rumour, and Elvis Costello & The Attractions. With the departure of multi-instrumentalist Dante DeCaro following the tour for their 2017 release, Cry Cry Cry, the remaining trio—Dan Boeckner on guitar and vocals, Spencer Krug on keyboards/synths and vocals, and drummer Arlen Thompson—regrouped in a barn-turned-studio on Vancouver Island and ended up woodshedding the songs for an entire new album. While the music strives for a fun balance between forward thinking sounds and the textures of 80’s new wave synthesizers, conceptually they explore the desire to stay present and connected as humans in the increasingly oversaturated world of media, screens and content.
Our attention spans are decreasing, while we are inundated with mountains and mountains of media crying out for our focus. As a culture we’ve become so media-drenched by influencers on Facebook, Instagram and the like, so that we’ve quickly lost touch with what is real in the here and now, so much so that they sing the repeated refrain that “nobody knows what they want,” in the opening “Under Glass.” Musically, the trio craftily connect their ideas to smart melodic hooks, that find echoes in the guitar and synth lines that follow, while the up-tempo rhythms maintain a solid beat. “Julia, Take Your Man Home” takes a humorous poke at toxic masculinity, in a song that demonstrates the band’s musicality in soaring guitar runs and pulsing synths and drums.
“Forest Green,” set to a faster, punk/pop beat accented by electronic drum sounds, while describing the tension as nature’s profound beauty is eyed by real estate developers, and what is lost for many so that some can cash in. Those electronic drums show up again later in the disc, on “Against the Day,” which again features those big sweeping walls of synth sounds. If Wolf Parade is an apt example, along with the recently reviewed of Montreal albums, we may be on the horizon of a bit of an 80’s new wave revival, sound wise, which in the thoughtful hands of these artists is a good thing. Cycles repeat, the world goes around, and somethings arrive at just the right time.
Wolf Parade has taken in and put to use a host of sounds and vibes from that powerful, past era, and yet found a way of expression that is consistently forward looking both musically and artistically. This is accomplished on Thin Mind, with such elegance that as you listen to the album’s 10 tracks, you don’t hear a pale imitation of a previous time, but creative musicians with the good sense to expand their musical vocabulary without losing their own identity. You’ll hear sound in the sonic anthems of “Out of Control” or “The Static Age” that recalls that previous era without sacrificing its currency. The result is fun, smart music that comments on our current cultural climate, while giving us music that is full of innovative grooves. It’s got a strong beat and you can dance to it. It’s a win-win.
Key Tracks: “Wondering Son” / “Forest Green” / “Against the Day”
Artists With Similar Fire: Arcade Fire / New Pornographers / Psychedelic Furs
Wolf Parade Website
Wolf Parade Facebook
Sub Pop Records
– Reviewed by Brian Q. Newcomb