Ty Segall & The Muggers: The Man Behind The Mask [Concert Review] 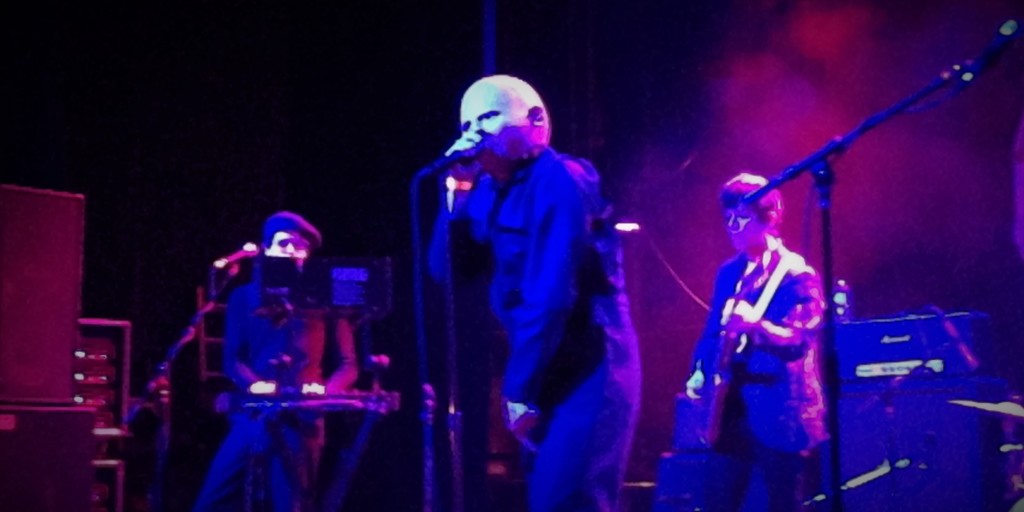 Ty Segall & The Muggers: Majestic Theatre, Detroit, MI – March 5, 2016
If you saw Ty Segall and some of his band mates bowling next door before the show in Detroit Saturday night, you wouldn’t think twice about going to their concert. Just regular guys hanging out, not caring about their score and generally having a good time before taking the stage. Now – fast forward to show time and when some of the band hits the stage in what some would say “different” costume attire, you might be a little more concerned. This fright will increase as soon as the lead singer walks out in a freaky bald baby mask (which he didn’t keep on the entire time) and cranks into the first tune.
Luckily fans, like myself, had some idea that the Emotional Mugger tour was going to be a little different, so you expected some nutty antics which Ty and the band provided much of the night. The other expectation coming into Detroit was that Ty and his talented group would rock the house down and when your supporting cast consist of guitarist Kyle Thomas (aka King Tuff), Cairo Gang’s Emmett Kelly, Wand’s Cory Hanson and Evan Burrows and longtime friend Mikal Cronin – this was no problem.
The focus of the night was the most recent record, Emotional Mugger (2016), as just about every track was presented in order. And when I say presented – I mean blown up and out with more muscle than the studio versions. “Squealer”, “Candy Sam” and “Diversion” were all memorable and explosive, which was no surprise with all the talented musicians on stage.
I think if Ty only gave the nearly sold out crowd Mugger tracks, everyone would walk away disappointed. Luckily, he broke out some staples from his catalog like “Thank God For Sinners,” “Feel” and a scorching “You’re The Doctor” plus a handful of others. All the tracks came fast and strong with the band never missing an opportunity to crank the amps up while Ty’s enthusiasm never wavered.
Some highlights from the show included Segall’s ease with his fans being on stage with him for brief moments at a time, before they surfed back off the stage. He never seemed annoyed with the consistent eager concert goers and even stopped for a second to make sure a dude was ok because he gave him a “nudge” and was afraid the guy landed on his head. Everyone was fine and Ty simply said, “please just be careful.” Mikal Cronin always brings the professionalism in his dress and playing, as he kept on the bass for most of the night but also broke out some superb sax near the end. Ty in the mask brings some awkward and weird dancing to the event, while later a man in the baby mask and diaper crawled on the stage as he was drinking some grown up milk (beer). At the end, this crawling even had some baby crying over the pa system to assist his movements – yeah it was weird – but not shocking – just weird!
If you have been missing Ty on tour, don’t be scared by this slightly different presentation. He will still impress and rock your earplugs out. I will warn you that he never picked up a guitar, which was my only disappointment for the night. He can shred and not getting to see it live was a bit sad. This doesn’t knock his supporting cast because the band is solid, but I would have loved to see Ty lead “Feel.”
There is one thing for sure that I walked away thinking, which was the man behind the mask is a pure talent that more people should see. His stage presence, his songs, his energy, and his report with his fans represents the real package. For every different project he puts out, for every record he produces and for every weird mask he puts on, Ty Segall backs it up with a fiery live show that shouldn’t be missed nor can be extinguished.
-Review by Christopher Anthony