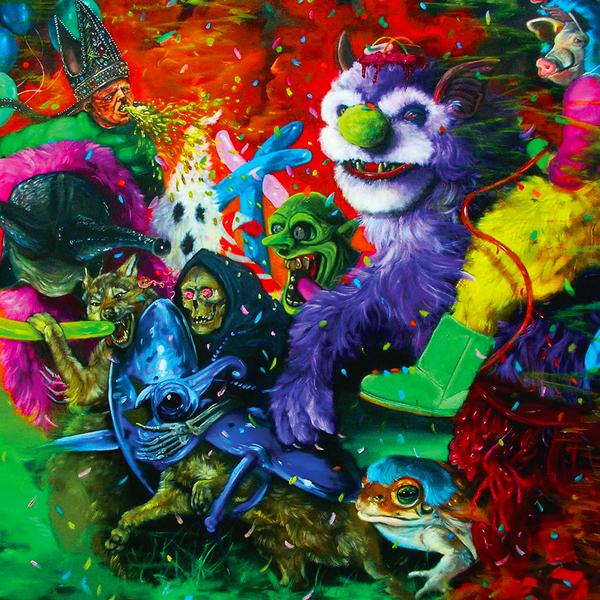 Album Review: Australia has really been a hot bed for what’s good in music these days. Bands such as: King Gizzard and the Lizard Wizard, Stonefield, Wolfmother (more or less), Methyl Ethel, The Vines, ORB, Amyl and the Sniffers, Tame Impala, POND, and now Tropical Fuck Storm. Tropical Fuck Storm is more or less a supergroup consisting of x-The Drones’ Gareth Liddiard and Fiona Kitschin with Lauren Hammel (High Tension) and Erica Dunn (Harmony/Mod Con). Their debut album, A Laughing Death In Meatspace is a twisted universe that deconstructs its’ rock n roll with flares of psychedelics and post punk.

What makes A Laughing Death In Meatspace succeed is its’ “emotional” yet apocalyptic view of modern times. Opener, “You Let My Tyres Down” hits the nail right on the head as a snapshot for the entire record. Gareth Liddiard’s vocal prowess balanced with the instrumentation and harmonies of his female counterparts is a real start the show with a showstopper moment. “Antimatter Animals” goes from abrasive, Mars Volta like slink to rally cries, “You’r politics ain’t nothing but a fond fuck you.” The album it’s self always feels off-kilter, topsy-turvy with the stringy and wiry “Chameleon Paint.” “A Laughing Death In Meatspace” is a dark take on Silicon Valley being overtaken by Kuru, which in short is a disease that is transmitted through cannibalism that induces trembling and pathologic bursts of laughter. It’s these moments that elevate the album. The wit, symbolism, and slang that went into this album make every decipher and discovery satisfying. This is an album that you want to pour over the lyrics.

The review might be a tad brief but, it’s for good reason. The album plays like a philosophical fun house. To go any deeper then that could ruin the surprises. Tropical Fuck Storm’s A Laughing Death In Meatspace is not only one of my favorite albums to come out of Australia but, one of my top ten albums of the year. If the rumors are true then the follow up is being written as we speak and I couldn’t be more excited for what comes next.

Key Tracks: “You Let My Tyres Down” / “Chameleon Paint” / “A Laughing Death In Meatspace”

Artists With Similar Fire: Grinderman / The Mars Volta / The B52’s

The Beths: Future Me Hates Me [Album Review]