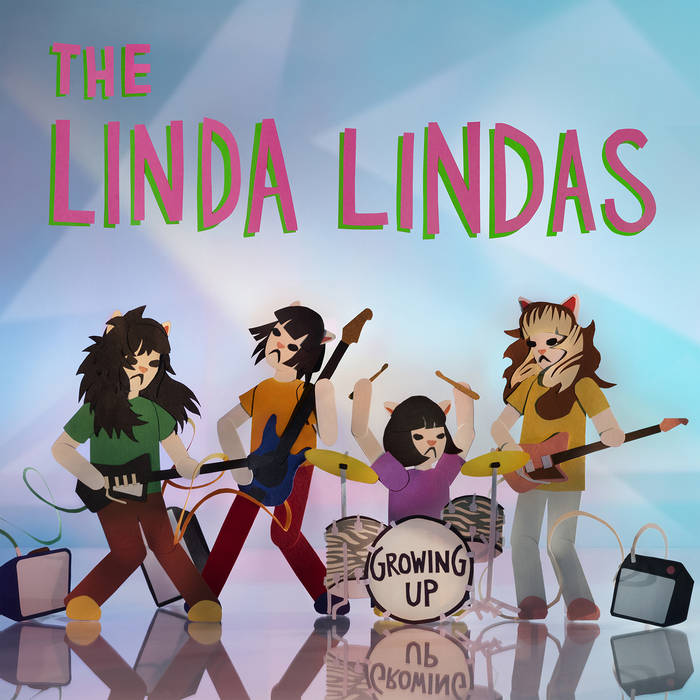 Two sisters, a cousin, and their close friend with an average age of 14. That is the make up of L.A.’s The Linda Lindas which caught fire last year when their performance of “Racist, Sexist Boy” for the Los Angeles Public Library went viral. They quickly were signed to Epitaph Records and now almost a year later their debut album Growing Up is upon us.

The group holds true to their initial sound here with 10 tracks of catchy punk pop that channels both sides of that coin with the directness of Bikini Kill and muscle of L7 but also contains plenty of sunny hooks that fit right in with a Best Coast track list. The album also really shouldn’t be this good because it is very easy to dismiss The Linda Lindas as a novelty act. From the Josie and the Pussycats cover to their young age, I could see this record falling into what we used to call the cut out bin without getting any spins. That of course would be a huge mistake especially if you are a fan of the genre.

Sisters Mila de la Garza (drummer, now 11) and Lucia de la Garza (guitar, 15), cousin Eloise Wong (bass, 14), and family friend Bela Salazar (guitar, 17) bring a slightly unexpected maturity to their songs which cover what they know; loneliness, youthful anxiety and the normal self-questioning of everything they do! This is exactly what you want to hear because its authentic. It is also helpful that The Linda Lindas know how to write a hook. Lead off track, “Oh!” hits with a thump with its group call out of the title paired with the strong guitar and mid harmonies. “Growing Up” has a pleasant upbeat sway that still has a punk foot tapping pace. The Spanish-language “Cuántas Veces,” is a slower track that works and offers a depth to The Linda Lindas that you would not have guessed was there without taking a listen.

Growing Up was produced by the de la Garzas’ dad, Carlos de la Garza (Paramore, Best Coast, Bleached), so the sound totally makes sense as he would be the perfect choice even if he wasn’t related. Throughout the album, The Linda Lindas sound older than they are but you never lose their youthfulness on the record. Especially as “Racist, Sexist Boy” closes the album with just as much venom and punch that it had a year ago. Growing Up is the perfect balance of punk and pop and repeat listens only makes it that more addicting. I also wouldn’t be surprised if its charm and memorable moments doesn’t find its way into our years end best of list because The Linda Lindas are the real deal!