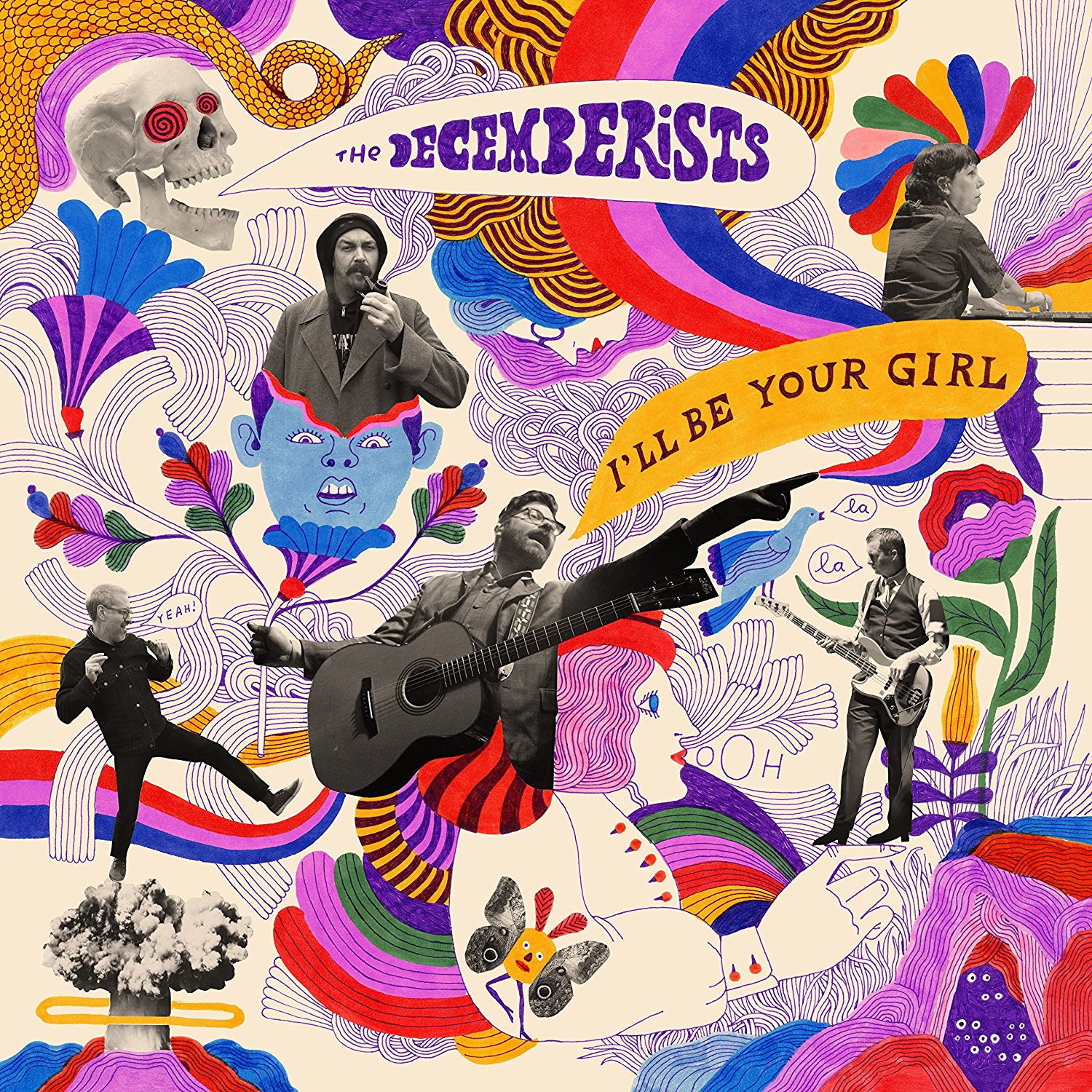 The Decemberists
I’ll Be Your Girl
Capitol Records [2018]

Fire Note Says: This one is a keeper.
Album Review: When The Decemberists’ first single for I’ll Be Your Girl, “Severed” showed up on the appropriate alternative-friendly satellite radio stations a few weeks ago, I bet I wasn’t the only fan to begin worrying that the more modern Brit pop leanings of 2015’s What a Terrible World, What a Beautiful World had led the Portland, Oregon-based alt rockers down an 80’s synth rock rabbit hole never to return. I mean it wasn’t a bad song, and I even enjoyed it, but I worried that we’d lose all those other things that we loved Colin Meloy & Co. for, their ability to echo the moody retro British folk renaissance of the 70’s with all it’s guitars, and storytelling and sorrow-ridden angst which they often managed to make fun and entertaining.
So, I’m happy to report that yes, “Severed” is as we thought, a pure 80’s new wave synth pop delight, with the hilarious warning, “Don’t you get clever,” but the 10 remaining tracks of I’ll Be Your Girl cover all the usual musical territory from the old world folk song leanings of “Cutting Stone” and “Rusalka, Rusalka / Wild Rushes” to more traditional rock and alternative sounds, often with Meloy’s unique lyrical twist of the knife.
“Once In My Life” opens the album asking the immortal question, “could just something go right?” Meloy starts out solo on acoustic guitar, and when the band comes in Jenny Conlee’s synth and echoing background vocals add to the mix, but don’t dominate. “Starwatcher” and “Tripping Along” touch on familiar Decemberists themes, the first in the Irish folk song vein, the second recalling Morrissey in an acoustic mood with The Smiths. “Your Ghost” gallops along, while the background vocals haunt the harmonies and the electric keyboard feigns a harpsichord sound, and guitarist Chris Funk leans into a solo with a retro overdrive sound that gives the whole thing a 50’s feel right down to the “la, la, la” girl group vocals at the end.
Now, nobody knows how to make feeling really bad feel really fun with quite the gusto of Meloy, and he’s at his most humorous and depressed on “Everything Is Awful,” and “Sucker’s Prayer,” with it’s mournful yet catchy sing-along hook, “I wanna love somebody but I don’t know how.” It’s a classic line, and a moment that drips with melancholy in the most lovely way, you’ll never be so happy to sing the words, “I wanna throw my body in the river and drown.” And again, Funk finds just the right guitar sound to express that painful wail.
Given the larger context, “Severed” feels less and less like an aberration, while “We All Die Young” feels like Meloy’s response to the Eagles’ “Heartache Tonight,” with the girl group vocals back with The Decemberists’ less than cheery answer to our culture’s worship of youth, while Funk lays into a soulful sax solo. I get that for some Decemberists fans, the band reached its pinnacle on old world focus ofThe Crane Wife and the majestic song cycle of The Hazards of Love, a need that the lush 8-minute Euro-folk of “Rusalka, Rusalka / Wild Rushes” is more than adequate to fulfill.
I’ll Be Your Girl closes with the title track, a 2 and a half minute pop song that unpacks gender role expectations with simple poetic ease, closing out an album of strong Decemberists songs that deliver all the many sides of their music that make this a truly great band. This one is a keeper.
Key Tracks: “Sucker’s Prayer” / “Everything Is Awful” / “We All Die Young”
Artists With Similar Fire: The Shins / The Mountain Goats / The New Pornographers
The Decemberists Website
The Decemberists Facebook
Capitol Records
– Reviewed by Brian Q. Newcomb