The Dandy Warhols w/ The Cosmonauts; 25th Anniversary Tour; First Avenue, Minneapolis, MN – Sunday, May 12, 2019
Before The Dandy Warhols took the stage at the historic First Avenue nightclub, it was obvious that the band viewed this 25th anniversary as a great excuse for a celebration. The first giveaway were the large balloon “2” and “5” at the back on the stage and again on each side, and the pile of white balloons hanging directly above the audience on the main floor. The Cosmonauts, on tour opening played a solid 45 minute set of noisy originals, but I think most of the crowd was trying to get a good photo of those “25”s.
The Dandy Warhols opened in relatively obscure stage lighting with the rather dense spooky synthesizer tones of “Forever,” their single/video released earlier this year, interestingly with lead singer and primary composer Courtney Taylor set up standing at the back of the stage near the drums, playing in relative shadows. “Holding Me Up” followed, with Taylor playing the folk rock guitar chording at the center of the song’s structure to the rock beat established by drummer Brent DeBoer, with guitarist Peter Holmstrom playing through so many effects, echoes and loops along with Zia McCabe adding keyboard bass and a variety of synths that created the sonic noise that occasionally got the Warhols linked to the shoegaze movement. 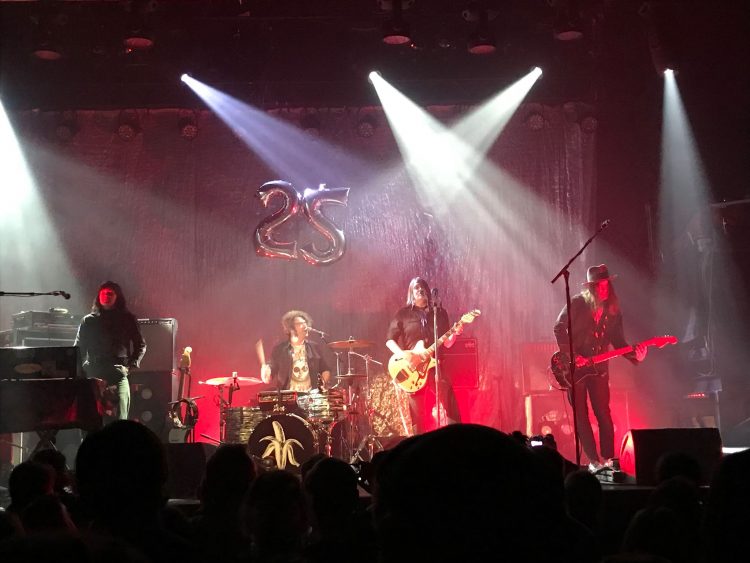 Late in that song, Taylor’s vocal melodies falls into a sing-along “da, da, da” pattern, something that showed up as well in the next song, “STYGGO (some thing you gotta get over),” which started to bring the audience into the proceedings, although here it was more “do, do, do, do,” a melodic device that also got the band flagged as inspired by Brit-pop acts like The Police. The Portland, Ore. band’s strongest pop inclinations were fully exposed on “We Used to Be Friends,” played with more aggressive rock energy that completely pulled to the crowd into the moment, singing along. But still, and throughout the night, The Dandy Warhol’s live sound was drenched in guitar effects and echo.
McCabe strapped on an actual bass guitar for “Motor City Steel,” the band’s celebration of Detroit’s auto industry, adding a nice low-end punch to the sound. That was followed with the pop/rock anthem “Get Off,” which allowed the audience to chant along with Taylor’s chorus of “hey, hey, hey’s.” But the audience response grew 100% louder with “Minnesoter,” a song with local resonance that had the entire crowd singing along. Following that, Taylor spoke about the special place he and the Dandy’s hold Minneapolis and its alternative radio stations. The city, he said in a rare moment of engagement, “is a big deal for us.” then he struggled to name local points of interest, Hennepin and Nicolet, but then when stumped for the name of something he remembered, he joked, “I just want to reminisce,” before laughing and starting “The Last High.” 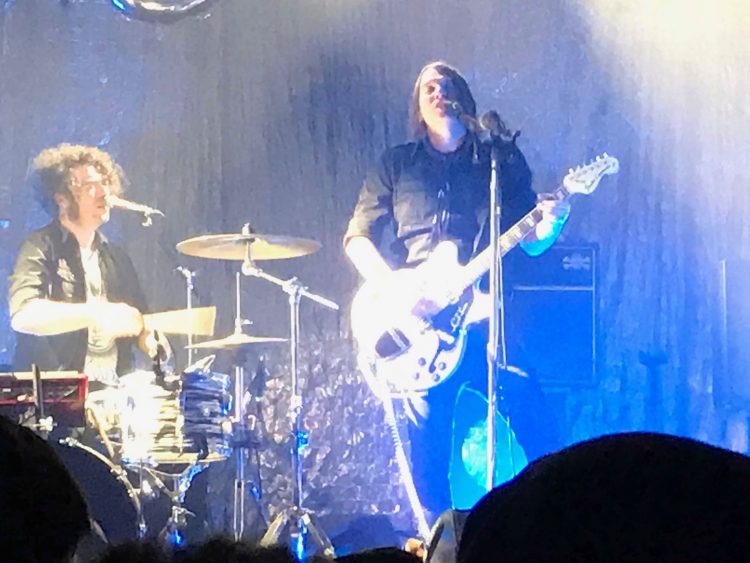 That followed naturally into “Highlife,” which features McCabe singing the lead on the strange playful rockabilly feel to the melody, which feels like a strange fit for the Dandy Warhol’s until Holstrom kicked in with one of his space out guitar solos. The synth pop of “Terraform” was up next, with the longer jam stretching out into psychedelic territory, with Deboer’s solid, groove based drumming keeping the proceedings grounded and the crowding bouncing to the beat. And while the effects laded approach of the Dandy’s most of the way through their set, with Taylor switching between two microphones, one the obscured his vocals even more than usual, it was noticeable in the sonic blur of the mix that DeBoer was also adding vocals to the thick combination of loops and sound effects.
“Mohammed” followed the psychedelic leaning, which continued into “Godless,” which brought waves of recognition through the crowd, once Holstrom started playing the recognizable sliding guitar riff opens the track. The songs move through some deep melancholy, which at one point had Holstrum using a violin bow across his guitar strings. And speaking of unusual instruments, McCabe, who stuck mostly to keyboards and tambourine, but played bass guitar on 4 tracks, also played one of those handheld keyboards that you blow through a tube to produce sound, for a fun, almost comical effect. 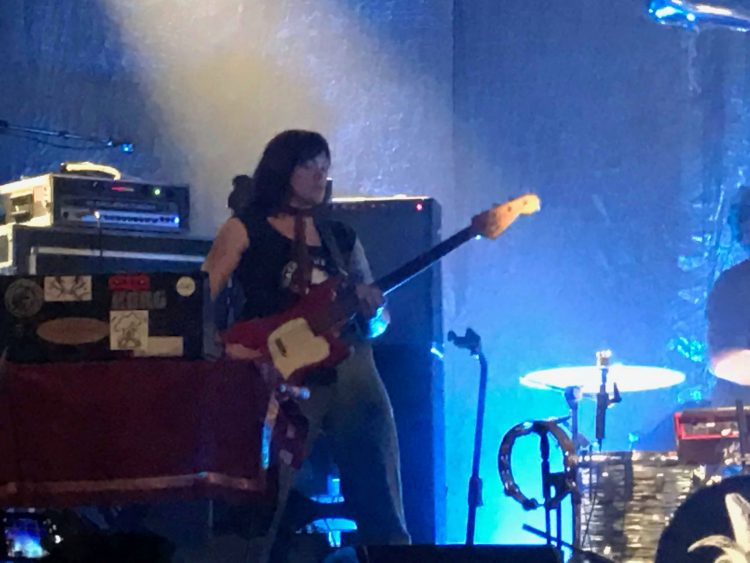 Next up was “I Love You,” which leaned toward that spooky musical ambience with Taylor and McCabe singing harmony on the choruses, while Holstrom leaned into a feedback overdriven solo, the sonic intensity enhanced by a strobe light as everything in the band seemed to be building in musical intensity. With no place left to go but to their bigger hit, Holstrom, who often leaned toward effects laden noise while Taylor played songs’ rhythmic core, started cranking out the big guitar chords of the band’s biggest hit, “Bohemian Like You,” and again the crowd eager jumped in to hoot along on the band’s “woo, woo, woo’s.”
Obviously at the show’s climax, the band added to the party flavor playing the fast guitar chord opening to “Every Day Should Be a Holiday,” as the balloons dropped on the crowd from the ceiling, as predicted. Balloons flying everywhere, the band rocked on another obvious crowd favorite. Then dipped back into their sonic psychedelic handbag for the haunting noise of “Pete International Airport,” which relied heavily on Holstrom’s effects and loops, before closing out the show with the rocker “Boys Better,” which had everyone playing aggressively, especially Holstrom who served up some Pete Townshend style windmills while playing his flying V guitar. 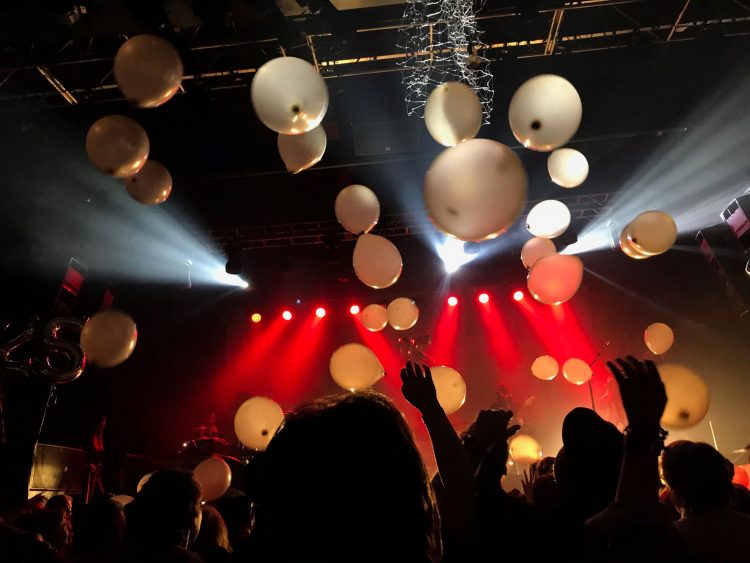 “Wow, twenty-five years,” said Taylor as the set came to an end. Then wanting to affirm this particular First Avenue crowd, assured the fans that their city had been important to the Dandy Warhols, saying, “You’ve been a huge part of our lives.”
-Reviewed by Brian Q. Newcomb