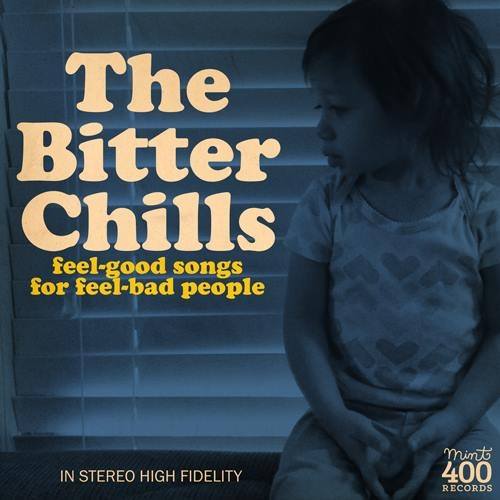 Fire Note Says: The Bitter Chills take a big step forward, on their witty, often funny folk rock songs.
Album Review: If you’re like me, and who isn’t, perhaps you’ve been taking life a little too seriously of late, maybe you find yourself watching cable news channels and wondering if this new President will destroy the environment or the economy, or introduce Martial Law or bring on a nuclear apocalypse first. So, like I just did, you should turn off the TV and give a listen to the sophomore recording from New Jersey folk/rock band The Bitter Chills, Feel-Good Songs for Feel-Bad People, which actually lives up to its title.
While the band’s 2013 debut was largely an acoustic folk effort with low-fi production values, still Birth of the Cold found The Bitter Chills winning over fans with their catchy melodies and the funny lyrics in songs like “I’m Ready for My Mid-Life Crisis” and “You’re Not the Girl of My Dreams (But You’ll Do).” For this second album, singer and acoustic guitarist Matt Cheplic and mandolin player Pietro Ciliberto have added lead guitarist Clint Morris and the rhythm section of bassist Chris Bobbins and drummer Christian Kisala, and stepped up their production values thanks to their label head, Neil Sabatino.
In a folk rock style that offers up smart, witty lyrics, The Bitter Chills will remind listeners of British folk/rock talents like John Wesley Harding or Nick Lowe, our American folkies Loudon Wainwright III or Todd Snider. The Chills’ funny lyrics tape a similar vein of irony and self-deprecating humor that you hear in early Fountain of Wayne songs.
The opening track offers this remedy to the demanding challenges of modern life: “If your life is full of lists of things you wish you could resist… at a much too early hour… when you’re standing in the shower, when you can’t remember how or where or why or when your troubles began” then you should “Folk It Down.” The melody is so catchy, the lyrics so witty that it would work in Cheplic’s old acoustic format, but Sabatino adds a supportive keyboard bed for a fuller sound, and Morris’ crisp, melodic guitar solo adds the needed “rock” element to make it “folk rock.”
And that formula holds through in funny songs like “My Lady Lacks the Energy (To Find Somebody New), which celebrates how laziness can help maintain relational stasis. “Nothing But Love Unfortunately” and “Girls Like Guys” share a common understanding, in the first the singer has nothing but love but his intended also needs money. In the second, the singer acknowledges that girls are drawn to guys that take risks, that have cars and careers, which explains why he sits in the “safety of my lonely room.”
The best pop song here, “Why Not Us,” also has a lyric that will keep it off the radio, but it’s a gem of thoughtful verses before concluding that “everything gets fucked up, why not us?” Cheplic is quite capable of serious reflections, in fact the underlying emotions of even his funniest songs find a root in the deeper human longings we all share, which comes through most obviously on “The Struggle In Here” and “Power of Love.”
The Bitter Chills have taken a big step forward on this second album, the songs are delivered in a production that raises the bar, yet the emphasis remains on the band’s quirky, comical persona, and innate musical touch. These are pop songs that engage the mind and entertain the spirit.
Key Tracks: “Why Not Us” / “Folk It Down” / “Nothing But Love Unfortunately”
Artists With Similar Fire: John Wesley Harding / Loudon Wainwright III/ Todd Snider