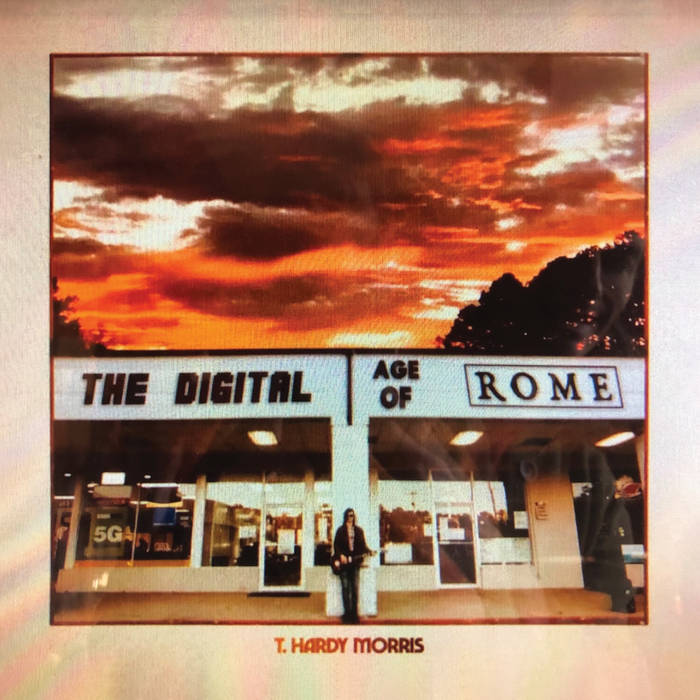 Sometimes an artist or musician taps a universal theme of love, hope, or purpose that transcends the everyday, and feels relevant in any context in which it is experienced because it’s not specific to any event or era. Classic rock songs may suggest a specific sound or influence, but often the language is broad enough to speak to any moment in time and can feel welcome and relevant every time you hear it, at random on the radio, or in some movie or TV show’s soundtrack. Other times, an artist is writing about some specific moment in time, and feels intimately connected to the events that inspired it, the way John Fogerty’s “Fortunate Son” is rooted in the Viet Nam War and the draft. In The Digital Age of Rome, singer/songwriter T. Hardy Morris has produced a rock album with profound connections and observations that have grown from this current pandemic crisis.

Morris was a member of Athens, GA-band Dead Confederates in the last half of the 00’s, breaking up in 2015, when he formed a “supergroup” called the Diamond Rugs, with Ian St. Pe of Black Lips, John McCauley of Deer Tick, and Steve Berlin from Los Lobos, and he’s released 3 previous solo albums. Coming off the 2018 release of Dude, The Obscure, and subsequent tour, Morris was ready with material for a follow-up in February of 2020 and was about to go into rehearsals with his band when everything shutdown. This long pause resulted in a time of required reflection that become the source of another album’s worth of songs. Morris writes melodic if often moody pop/rock, with a dreamy, otherworldly quality in the mix of guitars and reflections on the current zeitgeist that arrive dripping with a certain cynicism and a sprinkling of irony. Morris isn’t the first person to compare the crumbling American dream to the decline of the Roman empire, as he does in the title track, but in a few succinct couplets in the title track, he cuts through to a poignant truth: “Back when nobody cared/And a smokey bar was fresh air/Well enough left alone/Capital eating its own/The digital age of Rome/Subliminal views of home/ The digital age of Rome/Criminals on our thrones.”

Painting a picture of a culture that’s trending “Down and Out,” rarely sounds as catchy as Morris’ songs make our often bleak reality feel. We may be blinded by the new shiny object in “New New New…Next Next Next,” but experience should have shown us that all that glimmers is likely “Fake Gold.” We may have to settle for “Shopping Center Sunsets,” to helps us cope with our “First World Problems,” as we “Just Pretend Everything Is Fine.” But all is not lost, as Morris testifies that “I Assure You (An Ode),” “Love Takes (You Anywhere You Wanna Go).” And Morris does all this without actually mentioning the virus, which turns out to be the presenting symptom, but not the underlying disease. Which is what gives, Morris’ punchy rock anthems a certain universal relevance, as we’ve been through difficult times before, and will inevitably face them again because, as the saying goes, history may not repeat but it does rhyme. Morris has delivered a number of songs that will appeal to any rocker who’s not a Millionaire’s or a Senator’s child.