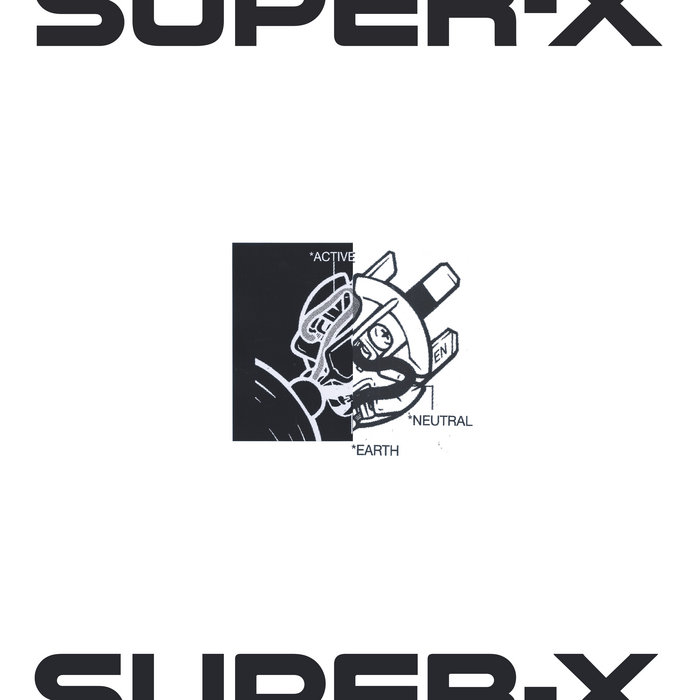 Melbourne’s SUPER-X is propelled by brothers Harrison and George Ottaway on muscle flexed guitars while being glued together by Kaelan Emond’s roaring drums. Their self-titled debut has been in the works for 5 years but the fantastic wall of fuzzy post-punk war they wage here was 110% worth the wait. The best part about SUPER-X is that the trio is unpredictable. It would be easier to blast through 10 tracks with an ear bending curdle and call it a record but the groups key to excellence is their attention to detail and not being afraid to take a risk with several music experiments.

The group actually begins and ends the record with take off ambient noise that successfully transcends you into the world of SUPER-X. They want you to take a trip with them for 38 minutes as the album kicks off with the instrumental “MEL” (Melbourne’s airport code) that ends with a seat-belt announcement ring before the guitar crunching riffs start off in track 2, “Terminus.” This added detail returns with tracks “TXL” (Berlin) and “SJJ” (Sarajevo) as the album flips to side B. At the records conclusion on “XX,” the banging just ends after 4 minutes in and SUPER-X leave you drifting off into space with the remaining 3 minutes of a humming echo that just fades away!

The instrumental and spoken word transitions give their self-titled debut depth but the musical tightness of the group is where they get their fuel. Without a bass, everything offered here comes at you with the dueling guitars and the fantastic drumming. Even with the wall of sound SUPER-X create, the vocals are straightforward and purposeful with tone much like the fantastic black midi record last year. It doesn’t matter what the songs length are, SUPER-X leave everything on the table. The band can jam out while also giving short bursts of catchy rhythms and fist pumping moments. The grinding riffs on the one-two punch of “One Cut” and “Circle Form” are all you really need to hear to be convinced that this is one of the best post-punk records of the year. SUPER-X take you on a flight for sure with every memorable pulse as this debut is worth the price of admission!