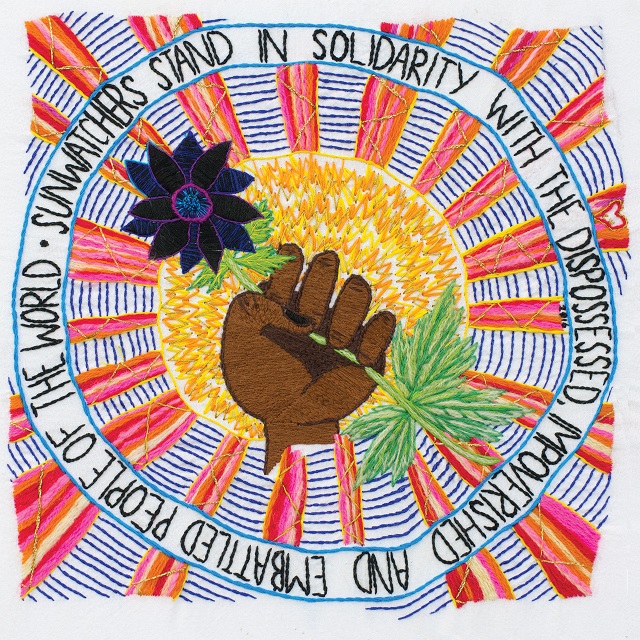 Who: Sunwatchers are a New York-based ensemble (featuring current & former members of NYMPH, Dark Meat, Chris Forsyth’s Solar Motel Band & Arthur Doyle’s New Quiet Screamers) that offer a combination of avant-jazz, punk, psychedelia, Ethio-jazz and desert blues. II is their sophomore record and the follow up to their 2016 self-titled debut on Castle Face Records.
Sound: This instrumental band takes you on a ride that hits all kinds of genres that includes funk, Ethiopian and Thai music. Fans of world music-based groups like Group Doueh and Sun City Girls, multi-instrumentalist artists as well as Thee Oh Sees and King Gizzard will like this record.
TFN Final Take: “SUNWATCHERS STAND IN SOLIDARITY WITH THE DISPOSSESSED, IMPOVERISHED AND EMBATTLED PEOPLE OF THE WORLD”. These are the words that are boldly displayed on the front cover for Sunwatchers sophomore album, II. It is a directive to all how deep their multi-universal music runs. Their message is really driven home on the over nine-minute “There Are Weapons You Can Bring To School” that when listened to it absolutely does not matter what language you speak because everyone will get it. The scorching upbeat “Silent Boogie” is a true highlight as saxophones and guitars go to battle and reach a compromise where both can exist on the same plain. This blending of instruments on II delivers Sunwatchers message flawlessly. This album won’t be for everyone given its instrumental tour but if you are looking to branch out and have liked King Gizzard & The Lizard Wizard’s work with Mild High Club or some of the more experimental John Dwyer (Thee Oh Sees, Damaged Bug) offerings then Sunwatchers is worth checking out.
Sunwatchers Website
Sunwatchers Facebook
Trouble In Mind Records
– Reviewed by Thomas Wilde