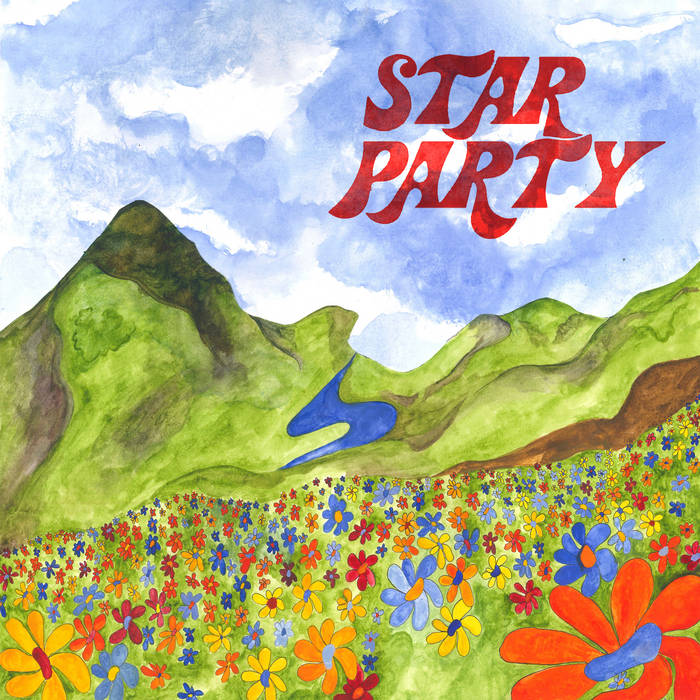 Star Party began in March of 2020 as a Seattle living room project between Carolyn Brennan and Ian Corrigan (Gen Pop, Vexx). The group quickly released a 4 song EP several months later but then spent 2021 writing and recording their debut LP, Meadow Flower. The time was well spent as the record is a glorious 19 minute buzz saw of noise, feedback, and melody which continues to hit you over and over with its waves of enthusiasm.

Because the songs are so short and to the point, Star Party get right at you from the opening track that matches Brennan’s vocals against a wall of sound and speeding drum machine beats. This frantic approach to their song structures keeps you on the edge but the album stylistically never leaves the rails. Two things really accomplish this task and make Meadow Flower work. The first is Brennan’s vocals, which have a similar sound to Bethany Cosentino of Best Coast, as she can deliver the same type of soft melody that pulls you in even though her vocals feel like they are contained in a wind tunnel and just out of reach. The second is the bands ability to quickly shift tempos within their songs while never letting their foot off the accelerator of thundering feedback. You can hear this approach almost in every track as each song is just as ambitious as the one before it.

“Living A Lie” is the perfect highlight track as the rapid fire lyrics change on a dime when the rhythm shifts and without wavering, Brennan’s voice conforms to the slower beat. “Push You Aside” is another standout song that has a crazy manic wall of instruments cutting up the background while Brennan’s voice keeps your ears out front. The track even has some time to squeeze in a Dinosaur Jr. moment, with an isolated guitar that rises out of the noise. Star Party also showcases that they are not one dimensional as they slow things down on the title track which has a bit more surf wave to it and is comparable to La Luz.

Meadow Flower was mixed and mastered by Feel It Records label mate Caufield Schnug of Sweeping Promises. He should get some credit here as the record walks a perfect tightrope of the listener being able to understand the vocals while the onslaught of noise maxes out. This is a great debut and even though Meadow Flower’s runtime doesn’t stick around very long, you will remember every moment!

Kevin Morby – “This Is A Photograph” [Video]